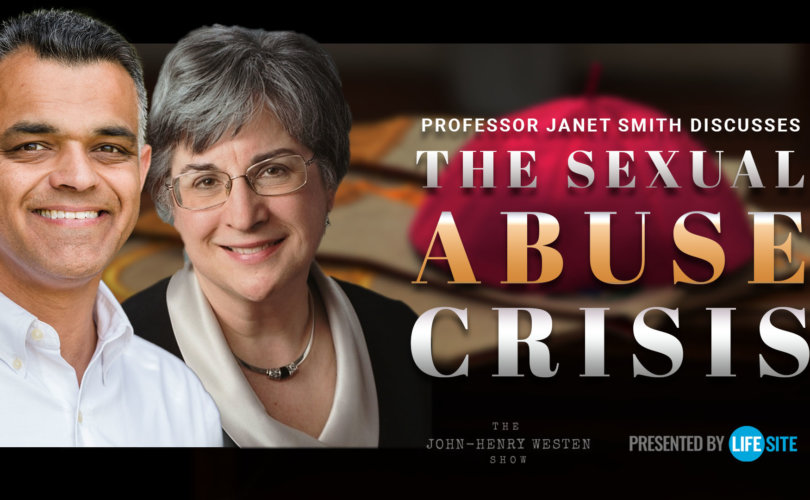 August 13, 2019 (LifeSiteNews) — Dr. Janet Smith has been a professor at Sacred Heart Major Seminary in Detroit for the last 18 years. She retired this past July (one year earlier than originally planned) because of her interest in investigating the sex abuse crisis in the Church. In this episode 21 of the John-Henry Westen Show, she talks to me about the root causes of the crisis as well as the “disappointing” papacy of Pope Francis.

A revert to the faith in the 1970s, Smith says the current crisis is a test for Catholics and that they must not abandon the Church. “Do we believe because we like our bishops, our priests…or do we really believe it’s Jesus’ Church?” “It doesn’t matter how bad the priest is…the sacraments are valid…I need that to live.”

She told me the bishops “are the problem” and that there’s only “a precious few” doing their jobs. “They aren’t doing very well.” In some dioceses, 90% of the priests are living manifestly immoral lives. In others, that figure can be as low as 5%. Either way, “most bishops inherited terrible priests…different dioceses, at any given time, have 50% of priests that are not faithful to their vow of chastity.”

Aware of the abuse crisis in the Church thanks to reading The Wanderer and other Catholic magazines in the 1970s and 80s, Smith, a staunch defender of Church teaching on contraception, told me the scales “fell from my eyes” when the McCarrick scandal went public. “This Church is corrupt,” she thought to herself.

Smith said she was “offended” by the words Pope Francis had for pro-life Catholics “obsessed” with abortion. Some of his prose early on in his pontificate was eloquent, she admitted, but “he has done so many things that are troublesome, ambiguous.” His attacks on the Pontifical Academy for Life, funded by John Paul II in 1994, are at once discouraging, distressing, and scandalous.

Smith also spoke to me about the way priests were able to keep their abuse victims quiet throughout the decades, what the future may look like, and the role Mary will play. “I don't know what's going to happen…we have to pray…we need to stay with Jesus and we need the sacraments.”