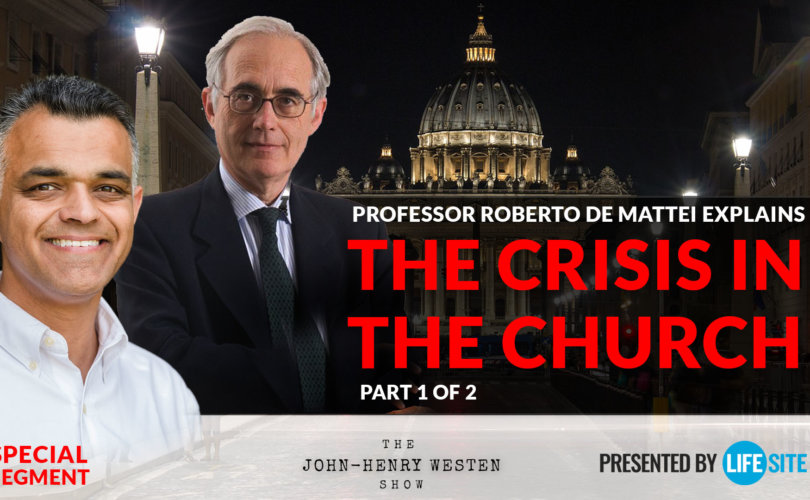 June 25, 2019 (LifeSiteNews) — In this Episode 15 of the John-Henry Westen show I am very pleased to bring you the first part in a two-part interview with Professor Roberto de Mattei on the crisis in the Church.

Described as the greatest historian on the Catholic Church alive today, Professor de Mattei was awarded the Order of Knighthood of St. Gregory the Great by Pope John Paul II. He currently serves as the President of the Lepanto Foundation.

I interviewed Professor de Mattei during my recent trip to Rome, where I had the honor of speaking at the 2019 Rome Life Forum, participating in the Rome March for Life, and emceeing the John Paul II Academy for Human Life and the Family’s conference on brain death.

Professor de Mattei told me the crisis in the Church has its roots in Vatican II but that Pope Francis is even more of a revolutionary than the progressive theologians who attended the council because he puts into practice the revolution itself.

“Pope Francis’ pontificate is a concrete realization…of the spirit of Vatican II,” which was “a revolution realized in the praxis, in the practice” of the faith. The true revolutionary, de Mattei argues, “is the pastoral man who in the daily practice changes the reality.” “Pope Francis is the true revolutionary in the church…because he’s transforming, concretely, daily, the spirit, the mentality” of the Church.

Professor de Mattei, who directs the magazine Radici Cristiane and the Corrispondenza Romana News Agency, has published countless articles and nearly 20 books. His latest has been recently translated into English – The Second Vatican Council – an Unwritten Story.

Vatican II was a “historical turning point,” he told me. Some Council Fathers saw a more optimistic period in bloom. Others, more conservative, did not. Those priests have been “proven right” and are “prophets,” he says. Professor de Mattei also said it was a “failure” on part of the Church that the Third Secret of Fatima was not revealed in the 1960s and that Russia was not consecrated.

Professor de Mattei, who considers himself a disciple of Professor Plinio Corrêa de Oliveira, says Pope Francis’ Abu Dhabi statement was “a very bad declaration” and that when he kissed the feet of two African politicians recently he did “exactly the contrary of the tradition of the Church,” which “affirms the Kingdom of Christ…the primacy of the Church over politics .”

Professor de Mattei contrasts the Pope’s kissing of the feet of these politicians to how Italy’s Prime Minister Matteo Salvini was criticized by Cardinal Parolin, Pope Francis’ Secretary of State, for kissing the rosary in public. He also mentions how Francis was silent about the 2019 Rome March for Life and about Vincent Lambert, the French citizen who had his life support removed. De Mattei called it “scandalous” that the Pope didn’t speak out about these things.