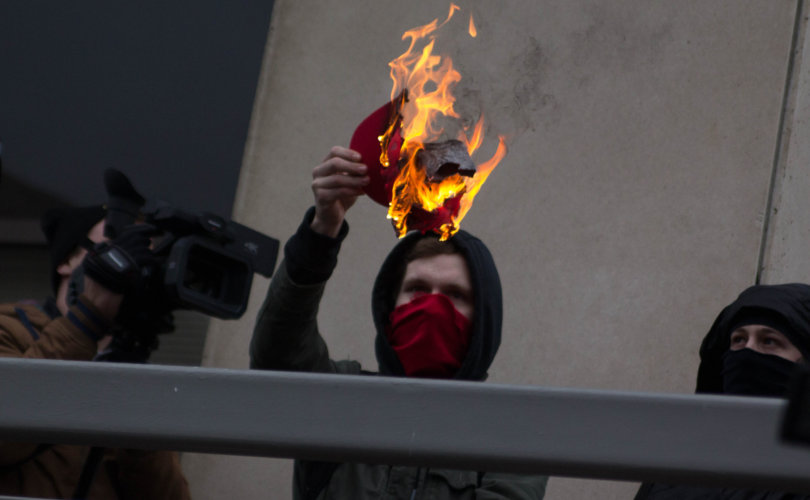 November 17, 2017 (LifeSiteNews) – Earlier this year, Maclean’s Magazine published an article asking a question that seemed to capture the prevailing mood on the Left: “Should older people lose the right to vote?” Because old people are practically dead, the author explained, there are some today who feel that they vote with only a short-term vision in mind, and thus should be barred from interfering with the Progress that would be brought about should young people be allowed to make all the decisions unsupervised.

My first thought is that this is precisely what a euthanasia culture looks like: The old people simply can’t die fast enough. It’s why so many children have been so encouraging when their parents bring up assisted suicide, even in an exploratory way. As I’ve written before, the phenomenon of children eagerly agreeing to find their parents a doctor to kill them must be one of the most soul-crushing things a mother or father can experience. Then there’s even more brutal examples, like the Dutch woman who was held down by her family while a doctor gave her a lethal injection against her will. And I could go on.

The underlying premise of those who are musing that perhaps old people should not be permitted to vote, of course, is that perhaps Brexit would have been voted down and Donald Trump wouldn’t have been elected if only young people had been voting. In other words, the world would be a better place if we turned everything over to the kids who are now embracing socialism after a century of massacre, mobbing university professors who don’t agree with them, and repudiating the bedrock principle of free speech. Kids who have lived lives of—well, privilege—and are still literally driven to tears by fictitious micro-aggressions cooked up by post-modern professors are apparently better equipped to determine our society’s future than those with lifetimes of experience behind them.

It’s chilling to consider how far our society has strayed from the historic attitude towards the elderly: A deep respect for the wisdom gathered through long years of hardship, painful experience, success and failure. Now respectable magazines muse that disenfranchising those who have lived through more history than anyone else while the young people, who are apparently the great hope of our civilization, are brought to hysteria by statues that have stood in town squares since long before they were born. I’m no fan of the Confederacy, and I’ve spent an ample amount of time explaining why, but I fundamentally disagree with the premise the iconoclasts seem to enjoy flaunting the most: The idea that they would have been any better. Dr. Robert P. George recently wrote that he enjoys challenging his students whenever they claim they would have been abolitionists by asking what current unpopular and costly position they publicly hold for a downtrodden and marginalized group—something that is far more difficult than mounting a statue of a long-dead soldier.

But hatred for our ancestors is all the rage now, and so denigrating the elderly while making war on men of stone is faddish among kids with nothing better to do. G.K. Chesterton wrote concerning a similar topic in 1905: “Suppose that a great commotion arises in the street about something — let us say a lamp-post, which many influential persons desire to pull down. A grey-clad monk, who is the spirit of the Middle Ages, is approached on the matter, and begins to say, in the arid manner of the Schoolmen, 'Let us first of all consider, my brethren, the value of Light. If Light be in itself good’–At this point he is somewhat excusably knocked down. All the people make a rush for the lamppost, the lamppost is down in ten minutes, and they go about congratulating each other on their unmedieval practicality. But as things go on they do not work out so easily. Some people have pulled the lamp-post down because they wanted the electric light; some because they wanted old iron; some because they wanted darkness, because their deeds were evil. Some thought it not enough of a lamp-post, some too much; some acted because they wanted to smash municipal machinery; some because they wanted to smash something. And there is war in the night, no man knowing whom he strikes. So, gradually and inevitably, to-day, to-morrow, or the next day, there comes back the conviction that the monk was right after all, and that all depends on what is the philosophy of Light. Only what we might have discussed under the gas-lamp we must now discuss in the dark.”

Which is precisely the case. We now have a population that cannot replace itself because it worships sterile sex and despises children, and also worships youth while killing the youngest members of the human family. We have a generation of children who believe words are violence, a debt hole so big we can’t see sunlight, and a generation so insane and sensitive that they believe saying things like “men can’t get pregnant” is genuinely offensive. The Left is so certain that Progress is progress that they vociferously embrace a generation that is currently trashing thousands of years of human wisdom and knowledge in exchange for a few recent, unproven insanities.

I understand that there is some nuance to be injected here. The Baby Boomers created the Millenials, and the parents of the spoiled brats currently using college campuses as a playpen bear much responsibility for the behavior of their children—many of them have manifestly failed to turn their children into adults. Many Baby Boomer parents, of course, were too busy pursuing their own lives and careers, waltzing through a series of divorces while pretending that this was all “better for the kids” to justify their own selfishness and assuring themselves that their children would rather have several bedrooms than a single, stable home with two loving parents. It is no surprise that selfish parents have created selfish children.

But there are those of us—myself included—who have been privileged to have parents dedicated to bringing their children up to the best of their ability and to offer them wisdom and guidance every step of the way. There are those of us who have been privileged to hear from old grandparents about the struggles of the past, and the horrors and triumphs that are history to us, but memory to them. There are some of us who are privileged to have examples to strive towards, and those of us who have nothing but awe and respect for our ancestors, recognizing that the hardships they endured for the generations they would never meet are worthy of our gratitude.

It is at times tempting to laugh aloud at the parody post-modern Millenials have become—like when an Asian sportscaster got fired because by unfortunate coincidence, his name was Robert Lee. But then I think of something Hilaire Belloc once wrote: “We stand by and watch the barbarian…his comic inversion of our old certitudes and our fixed creed refreshes us—we laugh. But as we laugh, we are watched by large and awful faces from beyond, and on these faces there are no smiles.”