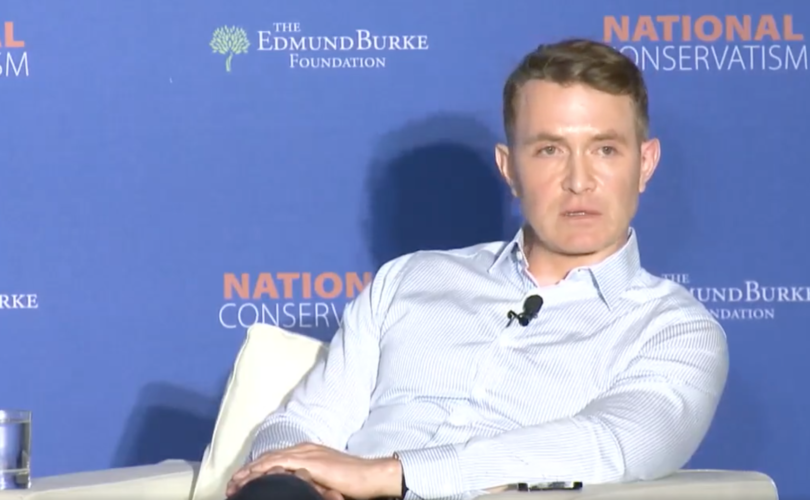 This is the fifth in an ongoing series on the problematic rise of LGBT influence in conservative and GOP circles. The first four commentaries can be found here, here, here, and here.

(LifeSiteNews) — Douglas Murray, a celebrated British gay conservative who was a panelist at last fall’s National Conservatism Conference (NatCon II) in Orlando, recently explained why he thinks the political right is unattractive to disenchanted leftists who now share more in common with conservatives than their former comrades.

“Bill Maher, Bari Weiss and a slew of other liberals who have fallen out with their own tribe have chosen not to identify as conservative,” Murray lamented in a commentary penned for Unherd. “Why won’t thoughtful ex-liberals consider joining the Right? Well, perhaps it has something to do with the type of conservative they’d be associated with.”

“What liberal or former liberal would want to find themselves in an ideological movement in which opposition to the right to abortion, opposition to no-fault divorce, and a nostalgia for the era before the invention of the pill are commonplace?” he asked.

The National Conservatism conference was filled with a disproportionate amount of Catholic social doctrine, and it is not the first time I have observed this encroachment …

I was once at a meeting of conservatives on the continent where, on several occasions, an American participant gleefully referred to gay couples as being in “sodomitical relationships.” Should we be surprised that so many liberals instinctively revile conservatism?

And there you have it. Murray sees Christianity in general — and Catholic orthodoxy in particular — as a stumbling block.

That’s no surprise. While still living as a gay man a decade or so ago, I too kept stubbing my toe on that stumbling block, until I realized that Christ crucified held the answer to everything I had been searching for in vain (1 Corinthians 1:23).

Murray sees objections to abortion, divorce, and homosexuality as problematic. He wants Catholic social doctrine to be treated as nothing more than an unwanted “encroachment” into the world of conservatism while warmly welcoming the acceptance of inhuman pre-Judeo-Christian pagan practices as new norms.

In essence, he wants conservatives to surrender to the full range of demands of the sexual revolution.

Murray reveals himself to be not a conservative, but a libertarian sexual revolutionary.

Yoram Hazony, head of the Burke Institute and chief proponent of NatCon II who was on the same panel as Murray along with another prominent gay, Dave Rubin, chose not to challenge either of his fellow panelists’ well-publicized homosexual relationships, which not long ago would’ve been jarringly out of place in conservative circles.

“We discussed a possible framework for working together, which would: (1) Allow religion to determine public life in places where there is a Christian majority, (2) but with ‘carve-outs’ for dissenting minorities,” Hazony told LifeSiteNews.

Yet such carve-outs risk hollowing out marriage and the nuclear family from conservatism and western civilization. That’s where conservatism is headed.

Conservatism will not grow via capitulation to the sexual revolution. To do so would only further weaken faith and family, obliterating the biggest protections against threats to freedom.

A recent Gallup poll shows that 64% of Republicans are satisfied with the level of acceptance of gay and lesbian people in the U.S.

According to the Gallup poll, Republicans are more satisfied with gay acceptance in America than Democrats in general. pic.twitter.com/nQg2Nog5k2

“It just speaks to changes in societal norms that we’ve seen over the past, really, two decades,” Jeff Jones, a senior editor at Gallup, told USA TODAY. “When we used to ask about same-sex marriage, in the 1990s and even in early 2000s, we would have majorities opposed. And now we have solid majorities that seem to grow at least a little bit every year.”

The poll suggests that nearly two-thirds of Republicans are comfy with sodomy, same-sex “marriage,” and the building of gay families via adoption and surrogacy.

Transgenderism remains a boogeyman to which all conservatives, including gays like Murray, can, at least for now, lock arms in opposition. While a good thing, the campaign against this common ground enemy also serves to camouflage and to distract from the stunning invasion of anti-conservative homosexual creeds that have taken up residence within conservatism.

If there’s anything that conservatives need to conserve, it’s marriage, the nuclear family, and every kid having a mother and father. Yet that’s not what GayCons like Murray and Rubin want or strive for.