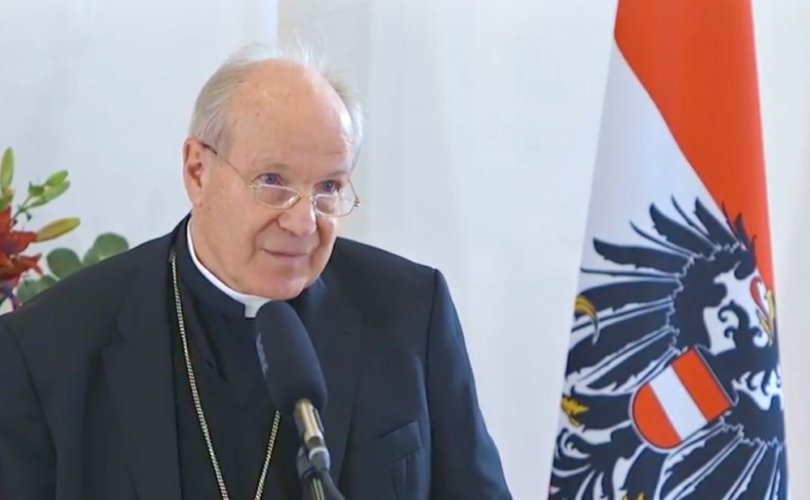 December 21, 2018 (LifeSiteNews) – A prominent lay representative of the Catholic Church in Carinthia, Gabriel Stabentheiner, has now gone to the press and publicly criticized Cardinal Christoph Schönborn for his close ties with Bishop Alois Schwarz, the former bishop of Gurk-Klagenfurt who is now accused of financial and moral corruption.

Stabentheiner asks why Schönborn made Schwarz the head of finances of the Austrian Bishops' Conference and even included Schwarz in his own diocesan committee for economic affairs, in spite of his knowledge about Schwarz' misconduct. In the meantime, Pope Francis has named the Metropolitan Archbishop of Salzburg, Franz Lackner, to be the Apostolic Visitator of the Diocese of Gurk-Klagenfurt.

As LifeSiteNews reported, the Diocese of Gurk-Klagenfurt published, in spite of a prohibitive order from Rome, the findings of a diocesan commission investigating Schwarz' mishandling of private and financial affairs in the diocese during his 17-year reign. The report states that the diocese suffered great financial loss under Schwarz and that the reputation of the episcopal office was also gravely damaged by his undue close relationship to a woman whom he gave much influence in the Diocese.

In light of these troubling developments, Pope Francis has now decided to have Archbishop Franz Lackner, the Metropolitan Archbishop of Salzburg, come to Gurk-Klagenfurt and investigate the crisis as an Apostolic Visitator.

Cardinal Schönborn, the head of the Austrian bishops, has now come under public scrutiny over publicly endorsing Schwarz – in July at the installation of Bishop Schwarz in the Diocese of St. Pölten – in spite of the fact that he had reportedly known about Schwarz' misconduct for about a decade.

Additionally, on December 19, Cardinal Schönborn made a public comment that still indicated his reluctance to criticize Bishop Schwarz. He said to an Austrian TV station that he was “confident” that there would be an “honest clarification” concerning the accusations against Schwarz. “When there are accusations against a bishop, then one of course has to investigate that and look at it and check it.” As the Austrian Catholic news website Kath.net comments: “This statement caused much consternation in Carinthia.”

On December 20, Gabriel Stabentheiner – who holds different positions in the Diocese of Carinthia and who is the head of the Council of Employees of the Catholic Church in Carinthia – wrote a public letter to the Austrian cardinal from Vienna. In it, he sharply criticizes Schönborn for his lenient December 19 statement. He tells the prelate to stop “appeasing the public constantly with such statements or to pull them by their nose as dummies.”

According to Stabentheiner, Rome has been informed for a long time about everything. Years ago, he said, he and a group of people had met with the then-Archbishop of Salzburg, Alois Kothgasser, in order to inform him about the situation in the Diocese of Gurk-Klagenfurt.

The author then asks: “Why was Schwarz made the bishop responsible for the finances [of the Austrian Bishops' Conference]?” Since Schönborn knew about Schwarz, why did the cardinal make Schwarz the Finance Bishop? asks Stebentheimer.

In the meantime, the Austrian magazine Profil published an article describing some of the shady operations of Bishop Schwarz, including that he rented from his diocese an apartment in Vienna and paid a much-too-low rent for it. It also adds the information that Schwarz is also a member of the economic council of the Archdiocese of Vienna, Schönborn's own diocese.

In light of the fact that Archbishop Franz Lackner himself has already been informed about the grievous situation in Gurk – he as Metropolitan Archbishop oversees that diocese – it remains to be seen how helpful and objective his own Apostolic Visitation will be. His Apostolic Visitation will take place in mid-January, and he assured the diocese that he will come as a “listener” who is attentive at preserving “unity.”