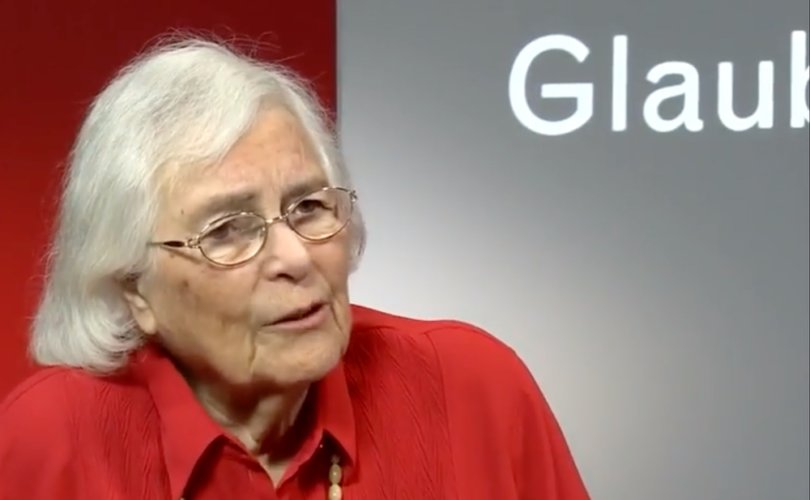 August 2, 2019 (LifeSiteNews) – Well-known Catholic psychotherapist Christa Meves has written a commentary for the German Catholic newspaper Die Tagespost in which she criticizes Germany's Health Minister Jens Spahn and his plan to criminalize so-called conversion therapies for homosexuals who want to overcome their same-sex attraction.

Such therapists, Meves writes, are to be “forbidden by law.” “Our government once more seems now to lose it,” she comments, and asks why one specific therapy is here being singled out, while citizens may otherwise choose whatever therapies they are interested in.

Meves, who is 94 years old and is the author of more than 200 books, first mentions in her essay that there are several initiatives being taken in Germany that aim at “introducing sexual diversity a la genderism” and at promoting Early Sexuality as well as children's rights that undercut parental rights. Some of these ideas, Meves adds, “had been discussed already years ago and then rejected.” “But today,” she continues, “where the family has already been so terribly weakened, and this for a long time, this unspeakable idea unfortunately has many more chances now to be implemented.”

Next to these “measures that are destroying our future,” Meves adds, the Health Minister Spahn is now proposing a new law, “which will have, among others, as its consequence that homosexuals, who are dissatisfied with themselves and their gender, are also going to be hindered from seeking help from therapists who have a proven competency for their concerns.” Such therapists, the author adds, “are even to be forbidden by law.”

On June 11, Minister Jens Spahn announced that he wished to implement, by the end of 2019, a legal interdict for so-called conversion therapies for homosexuals. Spahn, who himself lives in a homosexual relationship, stated that “homosexuality is not an illness and thus is not in need of a treatment.”

At the time, Spahn presented to the public two studies that claim that it is possible to forbid such therapies, because it is medically necessary and because the constitutional law would allow it. The Magnus-Hirschfeld-Foundation – which is named after a pioneer promoter of the homosexual cause in Germany from the 1920s and 30s – claims that such conversion therapies lead to depression and suicide. This foundation is counseling the German health minister.

Such a legal ban on these forms of therapies that are meant to help people with unwanted same-sex attraction could include punishments from financial penalties up to criminal prosecution. Such a new law has also the support of Germany's Federal Council which represents the individual federal states.

Further commenting on this new political initiative, Christa Meves explains, “people who are not anymore satisfied with their homosexuality … are not anymore able to find help!” And those therapists who continue their work will have to face “not only monetary penalties, but also professional consequences and further restrictions.”

Meves asks how, in a democracy, it can be that suddenly there is “one single group, for which one declares a therapy ban.” “Every citizen,” she continues, “can turn in thousand different ways to any kind of expert or healer whatsoever and to seek counsel for his problems and to let himself be encouraged to a behavioral change. Why can a minister be so presumptuous to want to make here an exception in one single area?”

“Can there really be in our society a legislative authority which would permit such an idea? Or did we also here lose touch with reality?” Moreover, Meves is also concerned that the German physicians already signaled their compliance with such a potential restrictive law.

“What?” she asks. “Did the physicians lose their minds?” For her, it seems rather that the physicians show compliance out of fear for “losing their reputation, yes, in this specific respect also their approbation and, with it, their existence.” This fear, according to Meves, is rooted in the fact that already in the past, and “on the international level,” such “eliminations in this field … have repeatedly become reality.” With the help of “simple strategies of lying,” a whole array of aid worker's “public voice” has been “simply turned off.”

As a final comment, Meves states that “the situation in the [Catholic] Church is not better: Why did the Vatican call all the shepherds to a conference on sexual abuse in Rome, but then simply leave out the key aspect?” Clergy sex-abuse reports indicate that homosexuality, not pedophilia, is the root cause of the crisis.