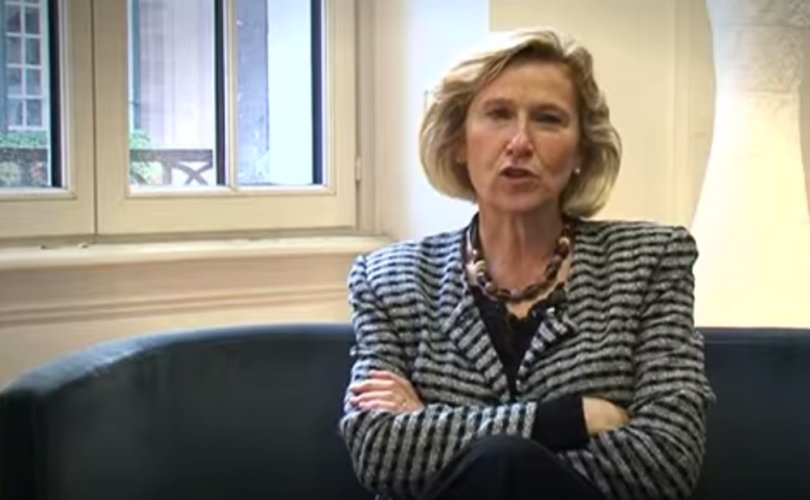 June 13, 2019 (LifeSiteNews) – Pope Francis’ revamped Pontifical Academy for Life (PAL) recently defended one of its own controversial members, who was reported to have rejected in a talk last year Church teaching on homosexuality and contraception, by attempting to discredit reports on the talk. A string of evidence indicates the whole matter was a blatant attempt at obfuscation in order to cover the matter up.

On December 18, 2018, LifeSiteNews reported that Professor Marie-Jo Thiel, a new member of the Pontifical Academy for Life, gave a talk in which she said that the Church's teaching on sexuality and family should be thoroughly reconsidered. She pointed to Pope Francis’s exhortation Amoris Laetitia as having given Catholics more discretionary freedom.

As news spread around the world that a member of the Pontifical Academy was promoting positions directly contrary to Catholic sexual teaching, the Academy along with Thiel went into concentrated action in what can only be described as an incongruous attempt to defend Thiel’s reputation by discrediting the reports as “fake news” and as “silly mud.”

The following sequence of events highlights the quality of the intellectual integrity and honesty of some high-ranking people in the Vatican. It also demonstrates the atmosphere of confusion that abounds under the pontificate of Pope Francis.

It is interesting to note that both the PAL as well as Thiel take issue with the Kath.ch and Katholisch.de reports, but say nothing about the KNA report, which was the original source of the information.

It is utterly false for PAL to accuse the news websites of the Swiss and German Bishops' Conferences of having “manipulated” the original KNA report on Professor Thiel's speech. As our report here is able to prove, both the Katholisch.de and the Kath.ch reports are nearly identical with the original KNA report and they both have the same quotes stemming directly from Thiel. There did not take place any manipulation.

Below is a translation of key passages of the KNA report of Thiel’s Dec. 13 talk in Freiburg:

Marie-Jo Thiel, the president of the European Society for Catholic Theology has called for an all-encompassing change of thinking with regard to the sexual and family ethics of her Church. Pope Francis has given impulses and a greater freedom with his magisterial document Amoris Laetitia, Thiel said on Thursday at the Catholic Academy Freiburg. One now should quickly make use of them. For this, there are now considerable chances for regional initiatives without always immediately seeking a solution on the level of the Universal Church. It is about a “healthy decentralization,” in the words of Francis.

Instead of insisting upon “universalistic intransigeance,” self-determination and the conscience of the individual person should be taken much more into account, said the theologian from Strassbourg [France]. It is high time [, she said,] to end the 'dominance over body and souls' as it has been sought by the Church. The guiding rules of a Christian ethics should be the principle of mercy. “The forgiveness, which we have received in love and in Faith frees us and thus leads us onto a path of conversion.”

The “failure of the heretofore sexual morality” of the Church can be seen in the crimes of sexual abuse committed by clergy, Thiel continued. Because the deeds of sexual abuse of power and conscience have been committed exactly by those who were meant to live out this morality in an exemplary manner. The abusers, the theologian said, thus destroyed “the whole teaching edifice of the sexual and family ethics and at the same time undermine thereby both the absolutist and authoritarian norms and the centralized and obscure power structures and their inherent possibilities of obfuscation.”

In a decisive manner, Thiel opposed the Church's ban on contraception. “Is there any inner connection between a sexual union and procreation in nature? No!”  She also spoke of a “culpable naivëte” of the Church when bishops argue that the use of condoms has contributed to moral decay and the spread of HIV/AIDS.

Additionally, she rejected magisterial statements, according to which homosexual acts are “pathological and always sinful.” The opponents of Francis within the Church claimed this and cited Benedict XVI for evidence, Thiel criticized.

It is now clear that Katholisch.de and Kath.ch did not manipulate the content of the original KNA report. The PAL was simply wrong to suggest otherwise. And furthermore, it would be strange for the left-leaning websites which are connected to the German Church to misreport someone who promotes what they also consider to be the future of the Church.

Given that the PAL and Thiel did not criticize KNA for its original report, and given that none of the three German-speaking media outlets have corrected their reports on this matter, and furthermore, given that Thiel refuses to provide her original manuscript which would have cleared up the entire matter instantly, it appears that this whole operation was meant to obfuscate and evade the situation, rather than to clarify it truthfully.

In the end, statements made by PAL and Thiel are not convincing. The blatant obfuscation only leads one to suspect all the more that what KNA reported of Thiel’s opposing Catholic sexual teaching was accurate. Most importantly, Thiel neither denied having opposed the Church’s ban on contraception, nor her remarks on homosexuality.

The earnest question that remains is why does the PAL defend and continue to have as one of its members someone who thoroughly opposes Catholic sexual morality, something that the PAL even itself, in one of its tweets, called “heresies”?

This entire debacle certainly does not speak well of the quality of the intellectual honesty of both the Pontifical Academy for Life's new members – as chosen by Pope Francis himself – as well as that of the PAL itself.