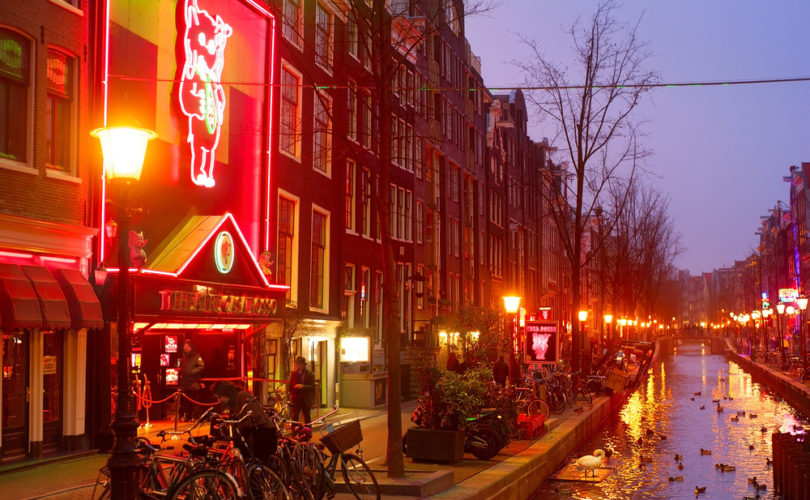 Sept. 25, 2015 (LifeSiteNews) – Never in human history has there been a time in which the buying and selling of human flesh, in one form or another, has been more prevalent. Human trafficking is the fastest growing criminal industry in the world. Pornography depicting the brutalization of women and girls is among the most popular material on the Internet. And abortion, the financed destruction of tiny human beings developing in the womb, claims the lives of almost 42 million pre-born children each year.

The first time I fully realized how dehumanizing the “sex trade” is was when I was a teenager, walking through the streets of Amsterdam with a student group from my school to visit the Church of Our Lord in the Attic, a hidden house church from the 1600s. What our teachers had not realized when they planned the tour, however, is that we had to cut directly through the infamous Red Light District in order to get there. As they rushed us down the cobblestone streets with more than a little panic, we gaped at an utterly foreign sight: Rows and rows of windows with scantily clad women, their fatigue painted over with thick layers of makeup and mechanical come-hither smiles, standing there. Like meat packages at a butcher shop, I remember thinking. Even the “souvenir” shops sold only human body parts—postcards featuring only breasts or bottoms, nothing else. A human meat market—one brothel owner even compared the tourists viewing the girls to men deciding which pizza to order.

More than 60% of the girls and women who work there report getting sexually assaulted.

The same thing struck me when traveling in Hungary earlier this year. My cousin and I arrived in Budapest from Belgrade at four in the morning and climbed into a taxi to find a hostel. The driver soon took us to a less than reputable area of the city in search of an establishment that still had rooms available. I wondered, stupidly, why there were so many young girls still walking about, even though it was dark and the sun was not even stirring. And then our taxi pulled up to a stop sign, and I made eye contact with one of them. Her blue eyes were flat and emotionless.

She was very young, and very pretty. She wore a light black jacket with a fur fringe, and painted-on pants that must have hurt to walk in. She must have been freezing—it was so ice-cold that every short breath came out in a puff of steam. An older woman, lounging against an abandoned storefront, barked something at her that I didn’t understand, and jerked her head towards me. She started to walk over to the car, gesturing at me and then to herself. And that’s when I realized that she’d been told to find out if I was a potential customer. I felt quite sick as we drove away, although I was naïve to be so surprised. Budapest, after all, is a sex tourist destination, an Eastern European Bangkok. I’d read about it. I’d just never come face to face with the reality—a girl who should have been in school, selling herself to strangers at the orders of others.

Those who defend legalized prostitution—although the differences between legal and illegal prostitution are few—defend it in much the same way that other horrible practices are defended. “Prostitution advocates often use the word ‘choice,’” as Benjamin Nolot of Exodus Cry, an anti-human trafficking organization, noted in his documentary Nefarious: Merchant of Souls.

Choice is a sacred word in a culture that worships individualism, and there is no cap on the number of lives that can be sacrificed to it. Joyce Arthur of the Abortion Rights Coalition of Canada, herself a former stripper, occasionally takes time off from promoting abortion to advocate for the legalization of prostitution. “I see a lot of similarity between the issues,” she says. “Choice, my body is my own, autonomy, and all those good things.”

It should surprise no one that somebody who trumpets the destruction and misery of abortion should also laud an industry that specializes in the degradation of all those who engage with it. After all, this is the same Joyce Arthur who defended Planned Parenthood’s dealing in baby parts as a good thing, and even said that Canadian mothers, too, could offer to donate the dismembered body parts of their pre-born children to be used for research. With abortion, as with human trafficking, the pattern is the same: Humans are the sum of their parts, and humans are only valuable in so far as the monetary value of their bodies. Human bodies only serve the purpose of being useful to others.

Dr. Mary Anne Layden, who researches the links between pornography and human trafficking, put it this way: “This is a business and I think that a lot of pimps would stop doing this if there wasn’t any money involved, but it’s a business and as soon as you tell somebody it’s a product, as soon as you say this [is] something you buy, then this is something you can steal. Those two things are hooked. If you can buy it, you can steal it, and even better if you steal it because then you don’t pay for it. So the sexual exploitation industry, whether it’s strip clubs or prostitution or pornography, is where you buy it. Sexual violence is where you steal it – rape and child molestation and sexual harassment is where you steal it. So these things are all seamlessly connected. There isn’t a way to draw a bright line of demarcation between rape and prostitution and pornography and child molestation. There are not bright lines of demarcation.”

And when the intentionally sterile sex occasionally results in the production of a child, most pimps and rapists immediately avail themselves of the happy-to-help abortion industry. The mother’s body, in their mind, is only useful to serve the sexual needs of paying customers, not to nurture with love and tenderness the tiny, fragile body of her son or daughter. The sexual exploitation industries sell the bodies of women and girls to men, and the abortion industry waits patiently to destroy the unwanted sons and daughters of victims and rapists. Sometimes, they can sell the body parts of those sons and daughters to research firms. All body parts are put to good use. The market gods are happy.

A culture without morals meets capitalism without ethics, and what we have created is a commodity culture. Pornography dehumanizes women for a mass audience, and human trafficking and prostitution allows men to play out their fantasies in real life. When I interviewed anti-sex trafficking activist and Member of Parliament Joy Smith, she told me that pimps use today’s pornography to groom their victims into accepting assault—and that in studies done of johns, huge numbers of them report using prostitution so that they can live out fantasies they would never try on “real women.” And the abortionists, of course, can take care of any resulting children, since they are not, in the eyes of our culture, “real children.”

Again and again, former victims and former perpetrators struggle to find words to describe the destruction our commodity culture has wrought, and time and time again they find themselves drawn to words that beckon towards the transcendent. They know, because they have felt the pain and the horror, that human beings are not simply two randomly-ordered bodies of flesh coming together for brief pleasure. We are so much more than that. We were not built for abuse and degradation, but for love and dignity.

Many times throughout the history of humanity, we have forgotten these simple truths. And that is why, more than two hundred years after the great Christian abolitionist William Wilberforce triumphed in his battle against the slave trade, we are again fighting the same evils. We tossed out God and truth, and the pimps and flesh-peddlers came creeping back in. We announced that humans were simply animals, and human traffickers and pornographers obligingly treated them as such. We taught everyone that materialism explained everything, and that souls did not exist—and the abortionists nodded and busied their tools to begin the work of dismembering and discarding the soulless clumps of cells we once recognized as our perfectly created sons and daughters.

Things have never been perfect. Prostitution and infanticide are as old as time. But we used to recognize these things as awful practices that preyed on the most vulnerable, and sought to stamp them out. Now, we live in a culture that has abandoned the moral framework necessary to recognize transcendent concepts like the dignity of the human person, the sanctity of human life, and infinite preciousness of the human soul.

It is when we begin to recognize these things that, through the human rubble and sex-driven carnage, we can begin to turn to a place where we realize that the value of a human being cannot be monetized, and that to try such a thing is an evil that spawns unstoppable wickedness.