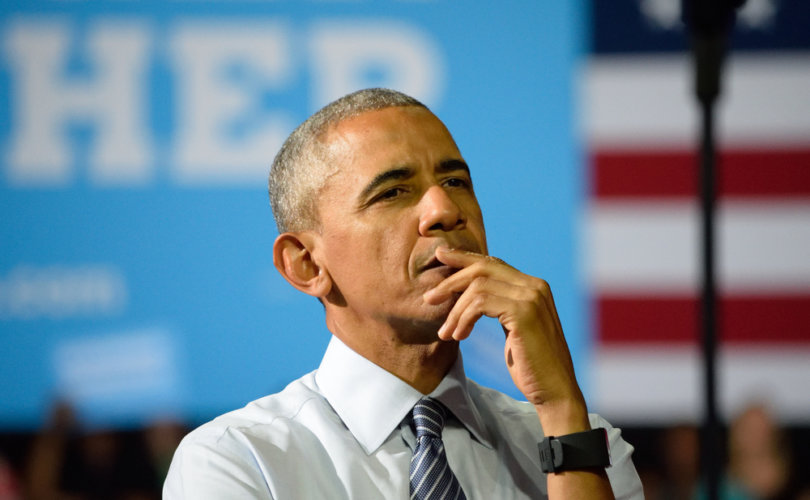 April 29, 2017 (LifeSiteNews) – Several weeks ago, I hosted author Michael Wear on my radio show to chat about his new book, Reclaiming Hope: Lessons Learned in the Obama White House About the Future of Faith in America. Wear’s story is a fascinating one: while he is a Christian, he was one of the youngest White House staffers in modern American history, serving under the president most Christians saw as an enemy to their values at best and an existential threat at worse. Wear, who actually asked then-Senator Obama for a job personally and facilitated evangelical outreach for Obama’s 2012 re-election campaign, described what it was like to attempt to reconcile his pro-life position with the most pro-abortion government in American history, the religious illiteracy of the Obama administration, the debate over contraception funding in healthcare, and finally, Barack Obama’s flip-flop on gay ‘marriage.’

That last, for many people, is the key to understanding Obama’s relationship with American Christians. For years, many suspected that Obama had always supported gay ‘marriage’ but simply denied that fact in order to get elected in 2008 while waiting for public opinion to catch up with his own. Obama, after all, utilized some of the biggest evangelical platforms he could—like Rick Warren’s Saddleback Church—to articulate his support for traditional marriage, before doing an about-turn prior to re-election and subsequently lighting the White House up in rainbow colors to celebrate the Supreme Court’s imposition of gay ‘marriage’ on all fifty states. Many Christians and secularists—the late Christopher Hitchens included—actually suspected that Obama had only decided to attend a church in order to smooth his entry into politics.

Wear, however, insists that Obama is a genuine Christian, one who just happens to hold many beliefs antithetical to Christianity. Obama’s war on religious liberty, his spearheading of transgender ideology in the public school system, and his rabid support for Planned Parenthood and the abortion industry notwithstanding, Wear discussed hearing Obama discuss his Christian convictions and even praying with him. But if Obama had been lying about his initial support for traditional marriage—that, Wear admitted, would be a massive blow to Obama’s integrity and sincerity.

And so if Dr. David Garrow is right, those who suspect that Barack Obama was never sincere might just have gotten their proof. Garrow, a Pulitzer Prize-winning author of a biography on Martin Luther King Jr. and a regular contributor for the New York Times and many other publications has recently written a new biography, titled Rising Star: The Making of Barack Obama. Due for release on May 9, Garrow makes a number of bombshell claims—including that a young Obama once “considered gayness.”

According to The Daily Caller:

In a chapter about the former president’s two years at Occidental College, Garrow reveals a close relationship Obama had with an openly gay assistant professor named Lawrence Goldyn…The biographer added, “Goldyn years later would remember that Obama ‘was not fearful of being associated with me’ in terms of ‘talking socially’ and ‘learning from me’ after as well as in class.”

“Three years later, Obama wrote somewhat elusively to his first intimate girlfriend that he had thought about and considered gayness, but ultimately had decided that a same-sex relationship would be less challenging and demanding than developing one with the opposite sex,” Garrow wrote. “But there is no doubting that Goldyn gave eighteen-year-old Barry a vastly more positive and uplifting image of gay identity and self-confidence than he had known in Honolulu.”

Garrow recently spoke about his book on The Jamie Weinstein Show. When asked about Obama experimenting with homosexuality, Garrow replied, “I think anyone and everyone, no matter what their role in life deserves a certain basic degree of privacy, in that context.”

If Garrow is correct and the young Barack Obama actually considered same-sex relationships as an option for himself, it seems wildly unlikely that he ever opposed gay ‘marriage,’ either in disposition or in principle. Garrow’s account adds to Obama’s former political strategist David Axelrod’s frank admissions in his own book, ironically titled Believer: My Forty Years in Politics. Axelrod records counseling Obama—who in 1996 as a state senate candidate had written in a questionnaire that he supported gay ‘marriage’ and would actively fight attempts to prohibit it—to put his real position on ice in order to court voters, especially African American Christians who were still incredibly resistant to the idea.

As TIME put it in their review of Axelrod’s book:

The insider's account provides the clearest look yet at Obama's long-established flip-flop, one of the blemishes on his record as a progressive. The admission of Obama's embrace of deception also calls into question the President's stated embrace of a new kind of politics in 2008, when he promised to be unlike other politicians who change their views to match the political winds. “Having prided himself on forthrightness, though, Obama never felt comfortable with his compromise and, no doubt, compromised position,” Axelrod writes. “He routinely stumbled over the question when it came up in debates or interviews.”

All the evidence points in one direction: Barack Obama consistently deceived the American people for the sake of political expediency, when in reality he had been sympathetic to the gay rights movement since his teen years. It is a shame that some Christians were sucked in by Obama’s soaring rhetoric promising hope, change, and a new politics. This “new” politics would be to the exclusion of and at the expense of Christians, who were targeted by the Obama Administration for years. As it turns out, that should have been no surprise. If Garrow and Axelrod are to be trusted, Obama threw his lot in with a movement that despises Christianity a very long time ago.