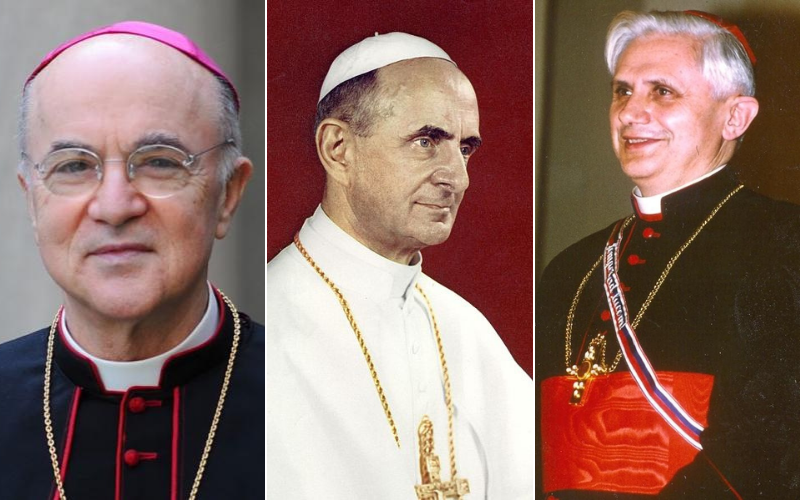 September 28, 2020 (LifeSiteNews) – Dear Archbishop Carlo Maria Viganò, in an important interview with Marco Tosatti, you recently pointed out the connection between the Second Vatican Council (1962-1965) and the July 23, 1967 Land O’Lakes statement, in which some presidents of Catholic universities in the U.S. and elsewhere declared their “true autonomy and academic freedom in the face of authority of whatever kind, lay or clerical, external to the academic community itself.” That statement was issued only two years after the end of the Second Vatican Council.

In several discussions about your interview, my husband Robert Hickson and I realized that what seems here even more important is that this unfaithful document was issued only a few days after the quiet abrogation of the Oath Against Modernism by Pope Paul VI, on July 17, 1967.

It was the New York Times which reported on this fact on July 18, and that paper must have been well-aware of the significance of this decision of the Pope to no longer ask all the clergymen and teachers at Catholic faculties to swear an oath against modernist ideas that had crept into the Catholic Church.

But, more importantly: were you yourself, in 1967, aware that this oath – which had been taken by all the clergymen of the Catholic Church since 1910, when Pope St. Pius X had issued it – was then abandoned?

What was the original intention of Pope St. Pius X with this oath, and what would you say were the consequences of the abolition of that oath?

Are you aware that the German professors at Catholic departments of German universities apparently did not need to swear the Oath Against Modernism – and this since 1910 – and thus they were the only ones in the world exempt from this oath? What would you say were the reasons why Pope St. Pius X gave this permission, and what would you say were the consequences of this exemption? We need to note here of course that at that time, most theologians at the universities would have been priests, and thus they had to take that oath as clergymen. Do you know more about this matter? Cardinal Walter Brandmüller once pointed out the grave effects of this exemption for German theology.

Moreover, according to my knowledge, all bishops who participated at the Second Vatican Council had taken the Oath Against Modernism. Would you say that those who actively and willfully participated in the changing of the Church's doctrine and attitude (toward more ecumenism, toward more collegiality and equality, against an attitude of condemnation of errors, against any “triumphalism,” for religious liberty, and so on) actually perjured themselves, thus breaking an oath they once had solemnly sworn?

Let us remember here that those priests who refused to swear that oath in 1910 were punished, for example by disallowing them to work in the pastoral care or by depriving them of the sacraments. That shows how much importance Pope Pius X attributed to this oath and to the danger of Modernism.

Then we have Pope Paul VI who abandoned the Oath Against Modernism, but then issued a “Credo of the People of God,” in June of 1968, one year later. How would you explain this to us? Is it that the Pope here expresses his wish that the Church less condemns, and more affirms?

Let us discuss now one specific example of a participant at the Second Vatican Council who had taken the Oath Against Modernism as a clergyman and who later went on to help change the Catholic Church.

In reading Benedict XVI: A Life, the new biography of Pope Benedict XVI by Peter Seewald, it becomes clear that then-Professor Joseph Ratzinger played a very crucial role in overthrowing the prepared schemas for the Council and starting a completely new approach. He was the counselor at the time of one of the leading reformers at the Council, Cardinal Josef Frings, and even wrote key analyses and speeches for him.

As Seewald quotes him, Ratzinger argued that these earlier schema that had been prepared under the guidance of Cardinal Alfredo Ottaviani were too much influenced by the “anti-modernist” spirit, were too “antiquated,” and he stated that the Council has “less the task to formulate doctrines.” In a speech at that time written by Ratzinger, he proposed that the Faith will “take another form,” that it will “become more barren in content and form, but perhaps also deeper.” In this described transformation of the Church, the theologian then argued that it would be helpful “that she let go of some old forms that are not anymore apt,” and he proposed to “loosen without hesitation the essence of the Faith from its cloth that is related to a certain period of time.”

He told Cardinal Frings, for whom he worked as a consultor and later peritus at the Council, that a certain schema “better be dropped altogether.” He bemoaned that the texts often were “too stiff” and too much written by “scholars,” rather than “pastors.” The Council texts, explained Ratzinger at the time, should not give “the impression of treatises,” taken “out of theological handbooks and written in a scholastic style,” but, instead, they should “have the language of the Holy Scripture and of the Church Fathers.” He thought that “scholastic theology” was “not anymore an instrument, with which to introduce the Faith into the conversation of our time.” He pointed to the importance not to offend the non-Catholic Christians – and even went so far to propose to avoid any new declaration concerning the Blessed Mother which could “place new obstacles” for “the outsiders (especially the Orthodox).” Ratzinger wrote at the time: “I believe one should drop this Marian schema [‘On the Blessed Virgin Mary, the Mother of God and of mankind’]. … The Council would put in danger its entire influence should it issue such a schema.” He explicitly said that one “should avoid altogether such expressions as mediatrix and so on that have not yet been dogmatized.”

When in 1962, with the direct involvement of Ratzinger, a group of council fathers – among them Cardinal Frings – was able to topple the election of prepared commissions of the Council, the German theologian Ratzinger stated joyfully: “The Council was determined to act independently and not to be degraded as the executing body of the preparatory commissions.” Professor Ratzinger also wrote that one should be more “ecumenical,” that is, “one should stop to regard the others merely as opponents, against whom one defends oneself,” and he proposed to “recognize them as brothers with whom one speaks and from whom one has to learn.”

To conclude: In October 1962, Joseph Ratzinger criticized the original schema “On the Sources of Revelation” because it is “wholly and entirely determined by the anti-Modernist spirit which developed at the turn of the century [1900], that is to say by an ‘anti’, by a negation, which ….had to appear cold, yes, shocking.”

How would you, Archbishop Viganò, comment on this attitude as expressed here by Joseph Ratzinger?

To what extent was it wrong to abandon the attitude of “negation” and of condemnation in favor of a more “positive” and affirmative approach?

How could Ratzinger, in his own conscience, combine his having sworn the Oath Against Modernism with his express rejection of that “anti-Modernist spirit”?

And, a final question on this rejection of an attitude of “negation” which means the rejection of the condemnation of evil: what was the effect on the Church in the decades to come, doctrinally (for example with regard to the lenient treatment of Liberation Theologians by the Vatican, and here also by Ratzinger), but also morally, for example with regard to sexual abuse cases?