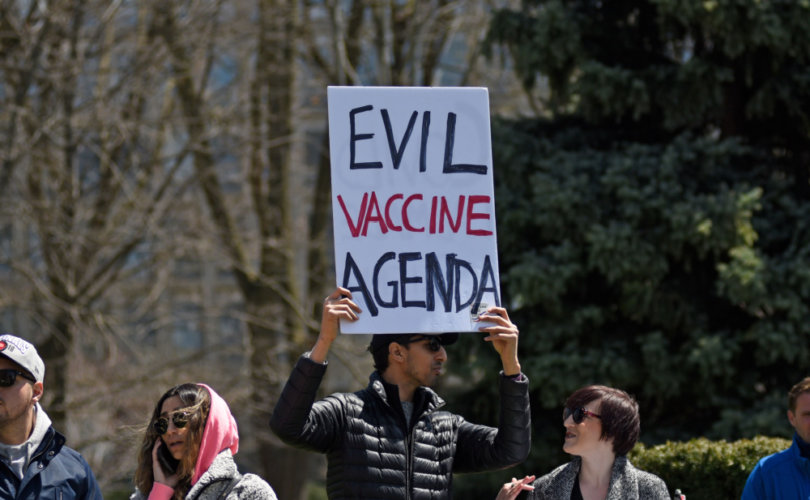 (LifeSiteNews) – As reported by LifeSiteNews, a Canadian woman dropped dead within minutes received a COVID booster while she was still in the pharmacy.

Considering how much our overlords tell us they care about our “health,” you would think that something like this would be national, if not, international news. After all, we locked down the world, and Canada decided to be super-duper extra safe, just so that no innocent lives could die from a virus.

But when you google “Canadian woman dies after booster shot,” you find basically nothing in the search results. A couple local sources, and then various articles opining about a fourth booster.

Of course, we know that the COVID regime doesn’t really care about health as a whole, and we also know that science, and the truth about science, is a relative concept that mutates more than any variants. But the fact remains that a woman did die literally minutes after she took a jab.

Call me crazy, but when someone ingests something or is hit by something, or is stabbed by something … and then they immediately die, I would venture the seemingly crazy notion that that thing might have caused their death …

Everyone died from COVID but no one from jabs

The hypocrisy involved in the COVID narrative surrounding cause of death is laughably absurd.

A woman dies immediately after the shot, but the provincial health authority says it is by “natural causes.”

Think back to the time that a 14-year-old boy died from cancer, but as part of routine testing he tested positive on a PCR test (highly dubious tests to begin with) and the top doc in Alberta said he died from COVID. The government apologized, but that only came after outrage from the public when it had already been presented in the media that the poor kid died from a virus when in fact he died from a terminal illness.

Or, what about how the province of Ontario admitted to overcounting supposed COVID deaths by 30 percent? (We all know how trustworthy the government is, they lied to us for so long, so they are likely telling the full truth when the “admit” something, right?)

Now, debates about the real number of alleged COVID deaths notwithstanding, we were told for years that every Tom, Dick and Harry who tested positive around the time of their death, due to a dubious test and even when the person was dying from terminal cancer, that it was COVID that killed them.

The media reported it, and these lies and overestimations were used in government deliberations to keep your business shut and encourage your family members to view you as unvaccinated swine who needed to be avoided.

Remember when Trudeau’s government basically declared the truckers to be terrorists? Yeah, that was because everyone was “dying of COVID.”

But when a woman dies in less time than it takes to say a Rosary after a jab … well, it would be irresponsible to bring that up.

Now, without even going down the COVID-skeptic route, we could easily use the mainstream medical narrative to question what has happened. According to Canadian public health, people can have anaphylactic reactions to COVID jabs, and they could have other underlying conditions.

People can die instantly from allergic reactions or if they have severe underlying issues. Just like when a poor soul doesn’t know that eating shellfish might kill him, he could drop dead at Red Lobster.

Now, someone might retort that this woman had received two previous jabs, so it could not be allergies, but this is not true. Allergies can come and go and develop later in life.

My point is, there is clearly a case for a legitimate and approved medical reason to be investigate with this jab did in fact kill this woman on the spot, and there is nothing “conspiratorial” about saying that or believing that.

If our media and medical establishments – basically the same thing at this point – were honest, they would be calling for a national inquiry, or telling people to see a doctor about allergies or issues.

But, of course, they are not honest, and they like to crush dissent, because ultimately it is the health of the narrative that is most important.

It needs to be demanded of the health authorities in Saskatchewan, and any region for that matter, look into any possible jab-deaths with the proper zeal.

Even if it could be proved that this woman did coincidentally from a heart attack that was completely unrelated, the fact that there is no investigation beyond the typic media nonsense is very concerning.

Call your local representative, email the authorities, whatever you just to do, just do something to get their attention.

Many people are still hypnotized by the mainstream COVID regime, and learning about a vaccine death, or even a potential vaccine-death cover-up could be an effective way to nudge someone into consciousness.