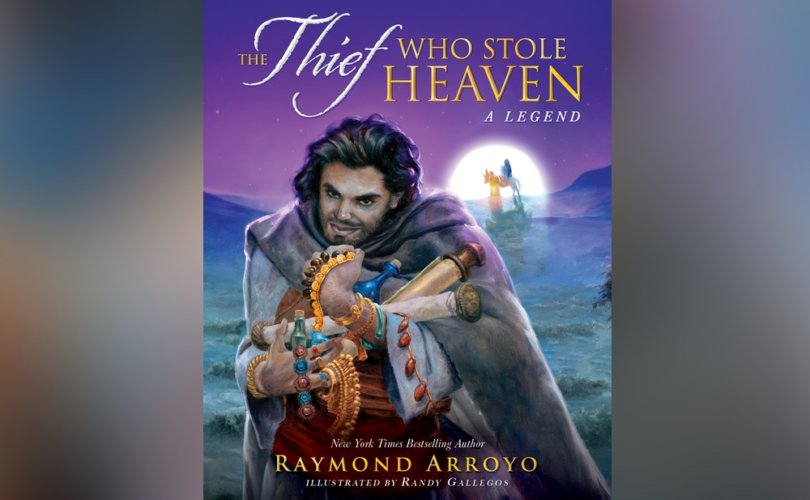 February 25, 2021 (LifeSiteNews) – In a new book for families, EWTN host of The World Over, Raymond Arroyo, comes to us once more with spiritual beauty and the touch of grace. After his Christmas book The Spider Who Saved Christmas, he is now presenting a new children’s Easter book focusing on the story of the Good Thief. The book is called The Thief Who Stole Heaven, and it is beautifully illustrated again by Randy Gallegos.

Based on legends and saints’ comments, Arroyo presents the Good Thief as a man who once, as a younger man, met the Christ Child and was touched by His eyes and by His smile. One feels reminded here of the famous angler’s “twitch upon the thread” employed by God on a sinner whom God holds close by that thread, even if He lets him go and wander for a while – an image used first by G. K. Chesterton and then mentioned by Evelyn Waugh in Brideshead Revisited. In Arroyo’s story, that thief was later to look again into these same eyes, on Calvary, at the Cross, and was touched to repentance. This new book is a wonderful gift to us for this Lent and Easter.

“Remember me in your kingdom,” were the words of the Good Thief Dismas, after he had acknowledged his own sins and after he had justified his own death sentence for his earlier crimes. These words still resound in the heart of the Church today when, during Holy Week, we read them in the Gospel. His yearning for Heaven in spite of his sins lets us remember also God's words that “the first will be last, and the last will be first.” The mystery of these words, similar to the one of the repentant tax collector, is that the sinner has often a humility that makes his heart more open to grace. Here we also remember the mystery of St. Paul’s own “thorn in the flesh” that he was not able to overcome, keeping him in humility.

But let us first consider the story that Arroyo tells us about Dismas. As the author told LifeSite in an interview about his book, which will be made available by Sophia Institute Press March 9, “I had never heard the origin story of ‘the good thief’ and when I stumbled across St. Augustine’s writings about his background I was hooked. This is not a story that I created, but a synthesis of the writings of the Church Fathers, popes and historians.”

What Arroyo discovered was that some legends say that Dismas met Jesus once, when he himself was a young man and already a ruthless thief who was called the “Prince of Death.” In the book, Dismas is approaching the Holy Family who were then on the road in order to flee to Egypt. Called upon by his boss to rob them, he opens the saddle bags of this poor family. St. Joseph asks him for mercy. But not long after that, it is Dismas himself who asks for mercy, because he glimpses the smile and the “piercing eyes” of the Little Babe. After a short encounter with Baby Jesus, who holds on to Dismas’ finger “with the strength of a man,” Dismas calls out: “If ever a time should come when I need your mercy, remember me.”

Raymond Arroyo comments on this part of the story as follows:

The notion that Dismas may have encountered Jesus as a young man only enriches the final act of his story—the part of the story we all know. After doing a lot of research I was sort of angry that we restrict Dismas to Good Friday and file him away. What emerged as I knitted together these strands of history and legend was that mercy endures to the very end. It also reminds us that it was not a king or an apostle or even the Blessed Mother who entered heaven first—but a broken, deeply flawed thief who stood up and spoke out when it mattered most. In truth he is the first story of Easter!

The story of Arroyo’s book is also, once more, the story of a loving mother, Mary, who smiles at Dismas, and who then, after receiving approval from her husband, shows Dismas “the blessed fruit of her womb,” as we sing it in every Salve Regina. After Dismas’ request for mercy at a later date, it is Mary who whispers to him the words: “Let it be done to you according to your word.”

Piercingly – and this is something our 10-year-old son noticed when reading the book – Our Lady is also shown in the first encounter with Dismas as kissing the feet of her little Babe, and in the second encounter with Dismas, she is shown to kiss Her Son’s Feet at the Cross.

The way Arroyo writes the story is full of stirring and resounding references and images that inspire many thoughts and prayers in one’s mind. It is easily said that this children's book is also a book for adults, and really a book for everyone.
As the author told LifeSite, “whenever I am writing a story, I never anticipate the audience reaction. I try to be faithful to the story at hand and true to the characters as they appear.”

Commenting on the role of Our Lady, Arroyo states that “Mary says very little in this book, perhaps only one line. But like the Gospels her presence looms large and she has a profound role in this redemptive drama. She understands more than she says and I think the reader feels that.”

Why should this story touch children?, we could ask. Because Dismas gives them hope, too, always to turn to Our Lady in moments of distress or of temptation and sin.

Raymond Arroyo told LifeSite, “I was just being true to this particular tale of a boy who was led astray, made some very bad choices, and had a brush with grace. Like many, he let his golden chance pass him by—literally. But he gets a second chance before time runs out. That resonated deeply with me and I think families and kids need to experience this story—one we have all taken for granted.”

Of course Arroyo does also recount the story of the other thief at the Cross, the one who is unrepentant refuses God’s grace, thus reminding us of St. Augustine’s words not to forget that danger of finally losing one's soul.

As these comments by Arroyo as well as some of the related reflections here show, this book is a treasure and a gift to the faithful. Just as with his earlier Christmas children's book – where Arroyo revived an old legend on how a spider protected and hid the Holy Family in a cave on their flight to Egypt – Arroyo this time also enriches our Catholic imagination and, with it, our faith.

He says about his new book that he sees it “as the prequel to The Spider Who Saved Christmas. It is the same Holy Family, rendered in the same way—textually and visually—that amble into this drama. Like all my stories, this one surprised me and revealed itself in the writing.” And both stories show how God protected His Holy Family on their perilous flight, either by withholding a thief from robbing them, or by protecting them from soldiers with the help of the golden web of a spider. This, too, could reassure us of God's protective presence in our lives in perilous times.

Let me end this little book review by pointing out that the Church of the East honors the Good Thief even more profoundly, at every reception of Holy Communion. In the Divine Liturgy of the Melkite Rite, the faithful say this following prayer before the priest then administers to them Holy Communion:

“Receive me now, O Son of God, as a participant in your Mystical Supper.
For I will not reveal your mystery to your enemies,
nor will I give You a kiss like Judas,
but like the thief I confess You:
remember me, O Lord, in your kingdom.”