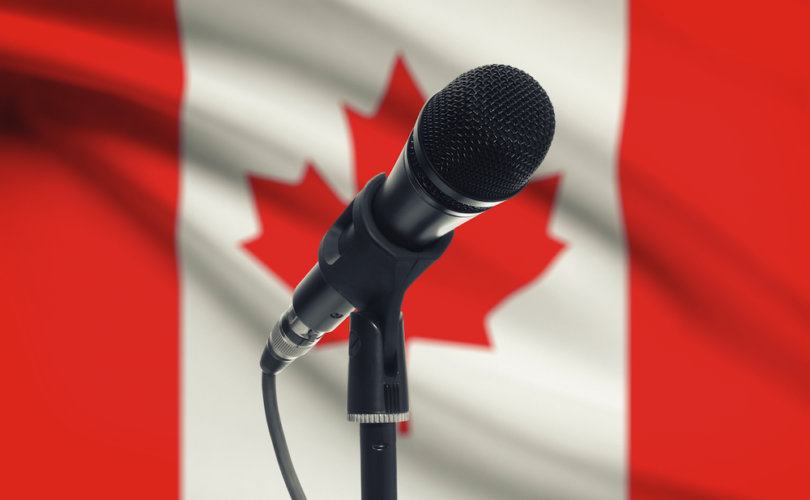 July 23, 2021 (LifeSiteNews) – Canadian conservatives often complain about the state of the country’s airtight progressive media; Liberals like to scoff this off as conspiracy. But the reality is that Canada’s media has moved so far left that an anti-Christian bias is simply taken for granted.

Take, for example, a headline in the National Post, once considered a right-leaning paper founded by the Catholic newspaper baron Conrad Black: “Odious speech is 'the price we pay for our freedom,' B.C. Supreme Court says in ruling.” The court ruled that the City of New Westminster had violated the free expression of a church by cancelling a contract with Grace Chapel for a youth conference because a facilitator, Kari Simpson, “was an anti-LGBTQ advocate.”

New Westminster had made the case that even if there was no hate speech involved, “the low value of expression supports the reasonableness of the cancellation.” The judge disputed this, stating that once “governments begin to argue that the expression of some ideas are less valuable than others, we find ourselves on dangerous ground.”

Reading the headline, I assumed that the Post was quoting the judge, but no. What Justice Maria Morellato said was this: “In a free and democratic society, the exchange and expression of diverse and often controversial or unpopular ideas may cause discomfort. It is, in a sense, the price we pay for our freedom.” The Post took “diverse, controversial, and unpopular”—which is an accurate way to describe the traditional view of sexuality—and rendered that as “odious” in their headline.

“Odious” means “repulsive.” In other words, the Post wanted to make it crystal clear that those who hold to a view of marriage held by the vast majority of people in the West prior to the year 2000 hold repulsive views. If the judge wouldn’t give them the quote, they were happy to insert it into the headline to ensure that nobody mistook the Posties for being one of them.

And then there’s this recent editorial in Chatelaine Magazine, a breathtaking little piece of propaganda essentially calling on the government to eliminate conscience rights: “Why Can Canadian Doctors Still Deny Access To Abortion—And Other Healthcare?” A better and more honest title might be “Canadian doctors should be forced to violate their conscience,” but abortion activists are rarely honest. The piece begins with a horror story of a doctor who gave a patient the phone number for an abortion clinic without facilitating it himself, and then asks if it is time to step in and demand that doctors do what they believe to be morally wrong:

We may soon have to decide how far we want medical objections to go. Conscientious objection is being legitmized on a larger scale because of MAiD—a procedure that, among provincial medical colleges, shares the same blanket set of rules as abortion. Canadian society is far more polarized on provisions around MAiD than on the right to abortion, and those attitudes could trigger the expansion of conscientious objection. To abortion advocates, this seems like another convenient, no-punishment escape hatch for doctors who don’t want to prescribe Mifegymiso for medical abortion or provide referrals for abortion care.

You’ll notice that in both of these instances—abortion and assisted suicide—the doctor would have to be involved in killing a human patient, either in the womb or by lethal injection; personally or by referral. The editorial relies heavily on the dubious insights of Joyce Arthur of the Abortion Rights Coalition of Canada, a censorious and morally defective abortion enthusiast who believes that Canadians should not have the right to March for Life (ARCC also noted, in response to violence against Canadian pro-life activists, that “we do not oppose violence at protests on moral grounds.”)

Since the death of Alberta Report and other newsmagazines, Canadian Christians have no significant counterbalance to the relentless bigotry of the mainstream media. The National Post can refer to Christian views as “odious” in a headline without warrant; major magazines can call for the removal of Christian rights with minimal pushback. In fact, churches can burn and be vandalized across the nation with only a handful of reliable media voices (like Rex Murphy) condemning arson while most remain artfully silent.

It is not a conspiracy theory to point out that Canada’s media monolith is largely anti-Christian. It is simply observation.