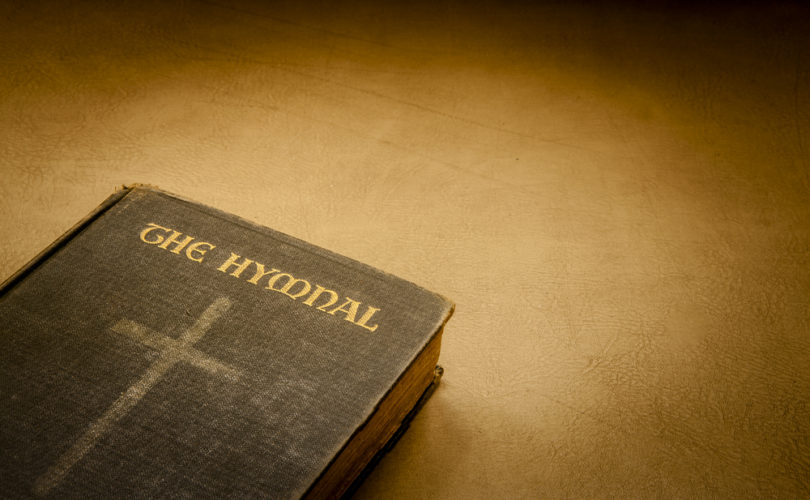 I've written in these pages about how we can form a vital Christian imagination in our young people. As I'm an English professor, I tend to think first about great works of prose fiction, drama, and poetry. But we shouldn't overlook that art of honoring God that stands right in our path.

Let me explain. At the college where I teach, the choir is going to sing for our annual evening of Lessons and Carols. You have a reading from Scripture, a short meditation by one of the Dominican fathers, then a song or two from the choir, with the people invited to join in. It is a fine idea.

We cannot allow the television, or the movie screen, or, God forbid, the leaking sewer of popular novels to form our imaginations. We would then be to the world like faltering and half-hearted preachers with bad breath.

This year, the songs include six or seven of the best-known carols, such as O Come, All Ye Faithful and Hark, the Herald Angels Sing. They also include six or seven contemporary pieces. It is hard to call them carols, because they don't have the structure of carols; they have the structure and the language of “easy listening” pop music on the FM radio. I'll choose the lyrics of one, as a good example:

Cold are the people,
Winter of life,
We tremble in shadows this cold endless night,
Frozen in the snow lie roses sleeping,
Flowers that will echo the sunrise,
Fire of hope is our only warmth,
Weary, its flame will be dying soon.

I won't say anything about the intentions of the composer and author, or about his faith. I'll grant that his intentions are good and his faith is ardent. But as poetry that stanza is pretty bad. As an English sentence it is ungrammatical and incoherent. Are “we” the “winter of life”? Roses don't “sleep” in the snow. In the winter, there aren't any roses at all on rosebushes. Flowers don't “echo” anything, let alone a sunrise, because flowers don't make a sound. If it's night, and you're indoors, you aren't trembling in shadows, because there aren't any shadows. It requires light to cast shadows.

Imagine that you are a member of that most difficult audience for easy and slovenly sentimentality. Imagine you are a young man who has been exposed to Sartre or Nietzsche or, these days, to that ignorant but intelligent charlatan, Richard Dawkins. This is going to be your first line of defense? Or imagine that you are any young person who enjoys easy and slovenly sentimentality, though of the far more poisonous kind that is peddled on such television shows as American Idol – the sentimentality of vanity and lust. What exactly will this sentimentality do to lead you instead into the adventurous fields of real feeling and thought?

The implicit message of such music is that the worship of God is just like everything else: putting the moves on a girl at a drinking party, chilling out with college friends in the wee hours, selling a fashionable automobile, advertising a soap opera. We have enough and more than enough of that already. We need far more, and other. It's as Aidan Nichols puts it, in Looking at the Liturgy: “Rites that do not allow a sense of distance deny to the people, paradoxically, a means of appropriating the act of worship, crippling them just at the point where they could be taking off Godward by a leap of religious imagination. For liturgical actors, though presented within a social frame, have to convey properties of what lies beyond that frame, a rumor of angels.”

And we have what will help us to make that imaginative leap. We have all kinds of wondrous treasures lying in chests in the attic, gathering dust in closets, and hidden underneath several generations of plywood, sheet rock, linoleum, plastic, and paneling. It's long since time to pry up the warping additions, open the closets, and clear out the attic.

Here for example is a genuine song about the night of Christ's nativity. It was written in Latin long ago by the first great Christian poet, Prudentius. It has been translated quite well into English. It is theologically profound and mysterious. The final line of each stanza, “evermore and evermore,” is unforgettable in its quiet simplicity and its binding of the things of time with eternity. It is sung to a most expressive plainsong melody, Divinum Mysterium. In each of the first four lines, there is one note to a syllable, except for a two-note lilt on one syllable near the end; and the interval between one note and the next is at most a single tone, higher or lower. That's until the startling fifth line, when all at once we leap a full fourth and sing five notes for a single syllable. It is the mountaintop of each stanza, capped by a line that brings the thought to completion, and by the haunting refrain:

Of the Father's love begotten,
Ere the worlds began to be,
He is Alpha and Omega,
He the source, the ending He;
Of the things that are, that have been,
And that future years shall see,
Evermore and evermore.

O that night forever blessed,
When the Virgin full of grace,
By the Holy Ghost conceiving,
Bore the Savior of our race;
And the Babe, the world's Redeemer,
First revealed His sacred face,
Evermore and evermore.

All ye heights of heaven, adore Him;
Angel hosts, your praises sing!
Thrones, dominions bow before Him,
And extol your God and King.
Let no tongue on earth be silent,
Every voice in concert ring,
Evermore and evermore.

The first time I ever heard this hymn, I was a graduate student at a secular college in the south, and one of the school choruses had gathered in the area between the student center, the bookstore, the library, and the English department building. About a hundred of us stopped to listen. When they came round to Of the Father's Love Begotten, I was stunned. I had never heard anything at once so sweet and so frankly theological, so tender and so exalted.

That prompts a question. Why had I never heard it before? I had been to Sunday Mass ever since I was a little boy. Why had we never sung it?

I have seen old hymnals for Protestant churches in Canada, compact booklets with about five hundred songs in them. They must have been for the poorer congregations, who couldn't afford big handsome books. These don't print the scores, only the words, with a suggestion for the melody to sing them to: Nettleton, Old 124th, Eventide, Capel. Such churches usually had a reed organ for accompaniment. The congregants must have known those songs by heart and loved them dearly; otherwise those booklets make no sense.

The other hymnals are all scored for four-part harmony: soprano, alto, tenor, and bass. It would have been much cheaper only to print the melody line, so we can conclude that people did in fact use those scores. That meant that the men must have been singing too. In fact, many of the revival hymns include refrains in which women and children alternate words with the men, or alternate questions and replies. None of that can be done unless you have everyone singing. Some of those revival hymns are boisterous and pretty simple musically; a lot of them sound like one another. Some of them are perfectly haunting, like the spiritual Go Down, Moses, the bass singer's glory. None of them are foolish or just like what you'd have heard down at the roadhouse.

We are apt to think merely functionally when it comes to divine worship. So long as we pray, hear the Scripture, and try not to let our minds wander during the homily, all is well. That is a serious mistake. We are creatures of flesh and blood, body and soul, reason and imagination. We are capable of far more than logic. We are capable of wonder. We cannot allow the television, or the movie screen, or, God forbid, the leaking sewer of popular novels to form our imaginations. We would then be to the world like faltering and half-hearted preachers with bad breath.

It has long been time to return wonder and reverence to worship.