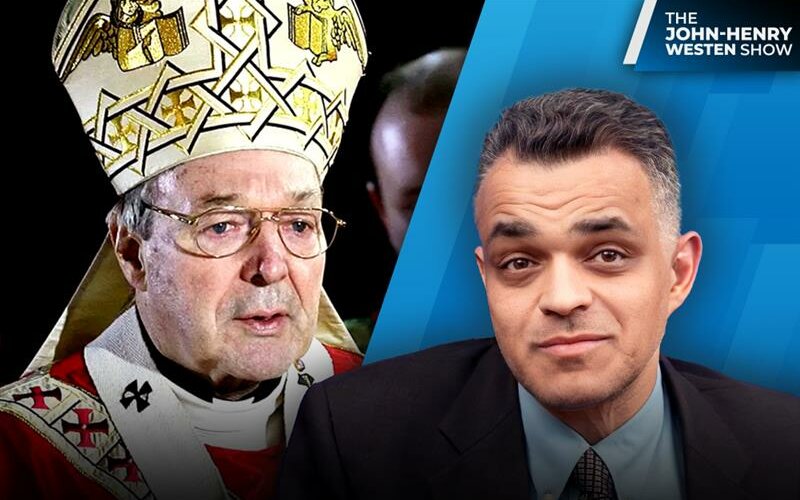 (LifeSiteNews) — This episode of The John-Henry Westen Show is a tribute to George Cardinal Pell, a great prince of the Church who just passed away suddenly last week after hip surgery. Even though he came out fine, he suffered cardiac arrest while speaking with the anesthetist.

I have for you today a special guest, John Macaulay, who knew Cardinal Pell all his life. He grew up in the same small town, he was a student of then-Archbishop Pell in seminary, he served his Masses, he was a friend. We are going to get an up-close look at this prince of the Church in just a moment.

But I wanted to give you my own reflections on Cardinal Pell, too. In 2006, LifeSite was blessed to interview him at length, and in 2015 he came to speak at our Rome Life Forum. I was just in touch with him by email on January 4 about interviewing him while I was in Rome. The dates I offered he couldn’t make since he had to attend a Charismatic retreat, but he sent his regards. It’s an email I will always cherish.

Cardinal Pell was a man persecuted for the faith by the modernist horde. Most famously falsely convicted of sexual abuse of minors, only to be jailed for more than a year (most of that in solitary confinement), only to be unanimously exonerated. But what did this heroic man of God say after his release?

He accepted his time in prison as “a gift and a grace.”

“God writes straight with crooked lines, and given that I was sentenced to jail, I do regard it as a gift and a grace,” Pell told reporters.

He was a great defender of the faith. Just prior to his death, which took place on January 10, he gave an interview to The Spectator in which he criticized Pope Francis’ Synod on Synodality, calling it a “toxic nightmare.’’

The article was published January 11, one day after he died.

“The Catholic Synod of Bishops is now busy constructing what they think of as ‘God’s dream’ of synodality,” Pell wrote. “Unfortunately, this divine dream has developed into a toxic nightmare despite the bishops’ professed good intentions.”

Pell called the Synod document for the upcoming Synod on Synodality “the most incoherent document ever sent out from Rome” due to its “inclusion” of LGBT groups and proposal of a female diaconate.

“What is one to make of this potpourri, this outpouring of New Age good will?” Pell asked. “It is not a summary of Catholic faith or New Testament teaching. It is incomplete, hostile in significant ways to the apostolic tradition, and nowhere acknowledges the New Testament as the Word of God, normative for all teaching on faith and morals.”

But more than that, veteran Vatican journalist Sandro Magister has reported that the late Cardinal Pell was the author of a 2022 memo sent to cardinals that severely criticized Pope Francis and highlighted key issues the next pope would need to address.

Writing on his blog January 11, Magister stated that Pell, who died a day earlier, was the author of a memo that Magister had reported on in March 2022. The memo was pseudonymously authored by “Demos,” and presented numerous criticisms of the Francis Vatican, along with topics needing to be addressed by the next pope.

In a comment to LifeSiteNews, Magister stated that he had “personally received the memo signed Demos (original in English) from Pell, with permission to publish it, provided the name of the real author is kept confidential.”

The original memo “was written all and only by him [Pell], from the first to the last line,” Magister said.

— Article continues below Petition —
PETITION: We won't give any money to liberal bishops who attack the Faith
Show Petition Text
11453 have signed the petition.
Let's get to 12500!
Thank you for signing this petition!
Add your signature:
Show Petition Text

It opened with a summary of such criticisms, with “Demos” stating:

Commentators of every school, if for different reasons, with the possible exception of Father Spadaro, SJ, agree that this pontificate is a disaster in many or most respects; a catastrophe. The author argued that while Rome, as the seat of the popes, had previously been a voice of clarity, today is was a promoter of confusion.

“The Papacy is silent” in the face of heresies, and there is at the same time “active persecution of the Traditionalists and the contemplative convents,” it added.

“Demos” wrote that the next pope “must understand that the secret of Christian and Catholic vitality comes from fidelity to the teachings of Christ and Catholic practices. It does not come from adapting to the world or from money.”

As such, “Demos” instructed the cardinals that the new pope first swiftly “restore normality, restore doctrinal clarity in faith and morals, restore a proper respect for the law and ensure that the first criterion for the nomination of bishops is acceptance of the apostolic tradition.”

From 2004, Cardinal Pell defended religious freedom in Australia, saying, “We have a right to teach our Christian teachings and to follow out the consequences of that.”

I remember that at the first Synod on the Family in 2014 where communion for divorced and remarried Catholics was raised, he said such a move “would be disastrous” for the Church.

And in his introduction to a book criticizing that proposal, he quipped, “Were the decisions that followed Henry VIII’s divorce totally unnecessary?”