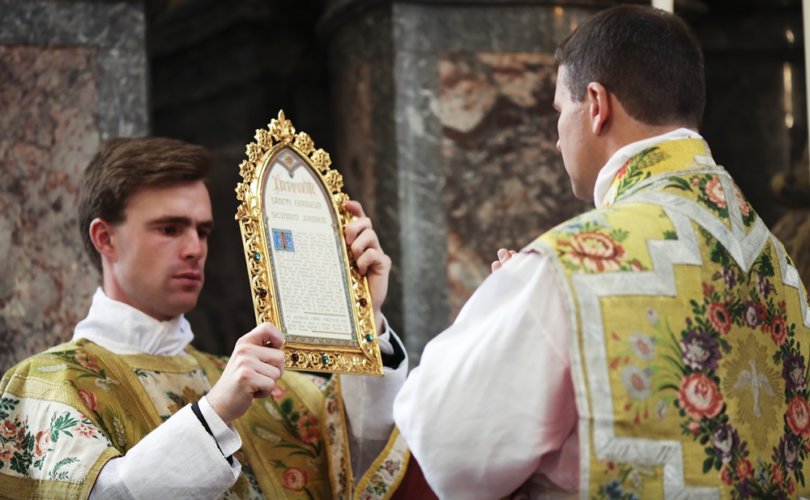 July 19, 2021 (LifeSiteNews) – I grew up in the West Indies and South America where modern liturgy was being “tested” even before the Novus Ordo was forced on all Catholics in 1969. It was only at age 12, in 1975, that I truly “discovered” the Church’s ancient and solemn traditional Mass at a Dominican boarding school in France. Since then, apart from a few incursions into “Paul VI” Masses when no others were available, the Tridentine Mass became part of my life, a haven of beauty, coherence, and reverence where one does not feel cheated out of the very substance of one’s faith by cheap, unwholesome, facile liturgical nourishment.

It was a time when we often made do with barns and garages and unlikely makeshift chapels, bearing the contempt of apparently brainwashed Novus Ordo priests who looked down on our “outdated” Latin mutterings and our refusal to go with the times.

But France – eldest daughter of the Church – was where resistance against the modernist liturgical revolution was strongest from the start, and flourished. Archbishop Marcel Lefebvre played a fundamental role, but he was not alone. The Barroux Benedictine monastery, headed by Dom Gérard Calvet, the pilgrimage of Chartres co-founded by Bernard Antony, still very active, the traditional Catholic press were all part of the great battle to preserve “the Mass of always.” I was privileged, from 1987, to work for more than 25 years for the daily co-founded by Jean Madiran, whose founding call to Paul VI took the form of an open letter in 1972 in which he proclaimed: “Give us back the Scriptures, the catechism and the Mass.”

“Since October 1958, the death of Pius XII,” Madiran wrote in 1974 in his Reclamation to the Holy Father, “modern apostasy, no longer sufficiently countered in the Church, has gradually gained a right of citizenship. Since October 1962, when the Council was opened, an avalanche of solemn ambiguities from on high has methodically disoriented the faith and hope of the faithful. Since 1969 (the official transformation of the liturgy took place on the First Sunday of Advent of that year), there is no longer any doubt that we are in the presence of a deliberate system of destruction of the Church, imposed by a faction which, camped out like an army of occupation, holds under its sway the hierarchies and administrations of the Church militant.”

I remember his profound spiritual joy when Summorum Pontificum came and crowned the work of his life.

My husband, Olivier Figueras, was bathed in the combat for Catholic tradition from birth. His father, André Figueras, was a French polemicist, a member of the French resistance: he became a staunch anti-Gaullist and a prolific writer who converted late in life after having been a cultural traditional Catholic for many years, and after his other son entered the traditional monastery of Le Barroux to become a monk and a priest.

For us going to the traditional Mass is a given, a necessity. When preparing our marriage in 1994, we asked for the Tridentine Mass in my country parish. “You privileged people, you always think you’re entitled to the best,” the left-wing rector angrily retorted. We asked him why “ordinary” Catholics had been deprived of it…

Now we have children of our own, whom we navigated through “new” Masses at school, the splendid Liturgy of Saint John Chrysostomos in the Greek Melkite parish of Paris, and mostly, the Traditional Latin Mass. Today, all three would no longer conceive of going anywhere else. Its power of attraction on the young is enormous, as a church full of TLM-goers, teeming with young people, adolescents, children, and plenty of babies proved this Sunday morning.

All were afraid that it would be the last TLM in that parish church, because Traditionis Custodes (with its horribly ironic title, “guardians of tradition”) aims to eradicate it from public view, discouraging those who love it and keeping away those who might be attracted to it. After Pope Francis’s cruel words, it was a balm indeed to hear the parish priest proclaim, with the local bishop’s blessing: “We have had the traditional Mass here for more than twenty years. Everything will continue as before.”

Many ignore how much stubbornness, steadfastness, willingness to be depreciated and also to fight was necessary to earn a full right of citizenship for the ancient, God-centered liturgy of the Church. Truly, Benedict XVI offered a great gift to the Latin Church because so many, thanks to Summorum Pontificum, have discovered the “old” Mass’s divine sacrificial beauty and its sense of adoration.

As the years went by, I also realized that the pro-life movement in many places tended naturally to move ever nearer to the traditional liturgical movement: the culture of death is perhaps but a consequence or a corollary of the death of the cult, and the culture of life needs be nourished by the truly living cult that best gives us the gift of the Church, “Jesus Christ spread abroad and communicated.”

Pope Francis has opened hostilities against the liturgical riches of so many centuries, and singled out the defenders of the traditional rites for episcopal vindication. Our faith obliges us to love our enemies, and we will continue to pray for God’s mercy on his and our souls, but we will fight on. It’s a battle that has been won once already in the last 50 years, and it will be won again.

Liturgy expert: Pope’s new restriction of Old Rite Mass ‘kind of like telling millions of Catholics just to jump off a bridge or hang themselves’