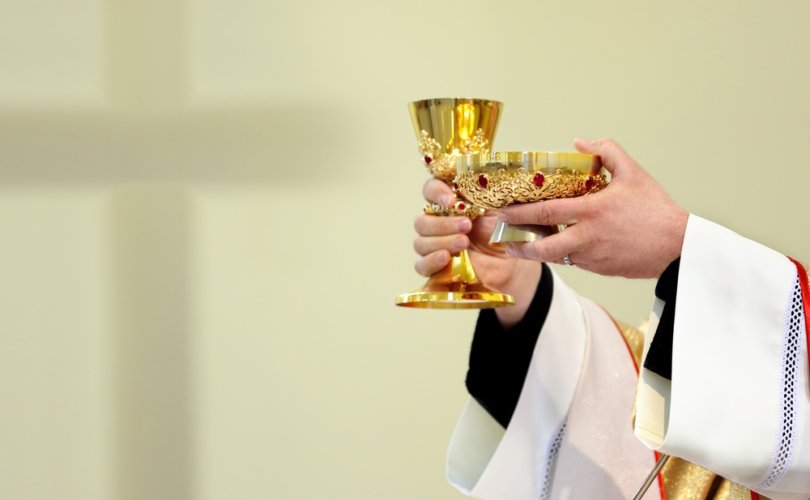 July 23, 2019 (LifeSiteNews) – Fr. Anthony Ruff, editor of the blog PrayTell, published a translation of the “16 theses” put forward in a book released on July 18 by historian Hubert Wolf. Wolf is a passionate critic of mandatory clerical celibacy. So far the book, Zölibat: 16 Thesen, is available only in German, but having already attained the status of a #1 bestseller at Amazon.de, it will no doubt soon appear in English to cause further confusion, factionalism, and dissent among the faithful.

Wolf’s theses are full of misconceptions, factual errors, leaps of logic, and ideological baggage. Due to the apparent popularity of his book and the explosive nature of the topic, it is important not to let his theses pass unchallenged. I find it disappointing but not surprising that Fr. Ruff deleted the two comments I left at PrayTell, in which I briefly and non-polemically responded to Wolf’s theses, thus demonstrating once again that there is no intolerance like that of today’s proponents of “dialogue” and “mercy.”

Below, I will quote the thesis in Fr. Ruff’s translation, then add to it a short refutation, in some cases recommending further reading.

Thesis 1. Taboos have fallen. The priest shortage and accusations of abuse force the Vatican to address celibacy.

Response: There has always been a priest shortage, above all in missionary areas. Nevertheless, it did not occur to our predecessors in the Faith, including the most dedicated missionaries, to abolish the discipline of celibacy or to relax any other standards. See this analysis. I will take up the bugaboo of abuse further in a moment, but suffice it to say that neither the Vatican nor episcopal conferences have had the honesty or the courage to address the most statistically relevant factor in abuse, namely, homosexuality.

Thesis 2. The mother-in-law of Peter. Celibacy cannot be justified biblically, since there are of course married bishops, priests, and deacons in the New Testament.

Response: The roots of celibacy are certainly to be found in the New Testament, even if the theological foundations and implications have taken time to develop in full, as has been true for many aspects of Catholicism. To sideline the Gospel and Epistle passages that commend celibacy chosen for the kingdom of heaven and to downplay or ignore the evidence for apostolic continence and the testimony of the early Church—especially the voluminous Patristic witness—is nothing other than shoddy advocacy scholarship.

Thesis 3: Celibacy is not the same as celibacy. Not only were there entirely different understandings of it in various eras; the regulations had to be repeatedly renewed, modified, and implemented against great resistance.

Response: One would have thought that a self-professed modern like Wolf would appreciate development in understanding over time, with a gradual deepening of appreciation for Church discipline. Nor should it surprise us that a discipline marked by self-restraining chastity has encountered resistance in every age. Has Wolf perchance heard of “disordered concupiscence,” one of the concomitants of original sin? It’s a phenomenon that shows up now and again.

Thesis 4. Pre-Christian origins. The notion of cultic purity of the priest derives from Jewish and pagan antiquity and no longer fits our era.

Response: So, according to Wolf, we don’t learn from and have some continuity with pagan sages and Jewish forebears? A hint of irrationalism and Marcionism there, no doubt! This thesis is a rehashing of the old liberal Protestant claim that Christianity abolishes cult, sacrifice, and priesthood.

Thesis 5. Jesus was no Stoic. The ideal of the ascetic priest goes back to notions of the philosophical life in antiquity and does not correspond to the model of Jesus.

Response: The morality preached by Christ was the most demanding the world has ever seen—and it would be insanity to ask people to embrace it, if He had not promised divine gifts (grace, the Holy Spirit) for living it out, and conferred upon His ministers the power of remitting sins. Here, once again, we see the liberal Protestant idea of Jesus as a nice moral teacher who hands out prizes all around and makes no demands that require self-denial.

Thesis 6. Economic roots. Abstention from marriage in the Middle Ages and early modernity ensured that clergy would not bequest church resources at their disposal to their children.

Response: Economic questions cannot be so easily dismissed. How many dioceses are ready to financially support a cleric with his wife and (since we presume they follow Humanae Vitae) large family? Or are we assuming that married clergy should conform to the current US average of 1.89 children?

Thesis 7. Flying the flag in doctrinal battles. In the Reformation and Counter Reformation era, celibacy served as a mark of distinction from Protestants.

Response: While this is largely true, it is also irrelevant. First, Catholics will always hold that Protestants are mistaken in some of their views, which is hardly surprising for sects based on the fissiparous principle of sola Scriptura. Second, John Henry Newman and other Protestant pastors have historically chosen celibacy, recognizing its value and superiority.

Thesis 8. Priests too have human rights. Since the Enlightenment, the critique of celibacy as violation against nature has radicalized advocates of celibacy.

Response: The Enlightenment’s conception of “nature” is exceedingly narrow, prescinding from the dual perspective of creation and redemption. God created man to find himself by giving himself away in love. This takes place in any Christian life worthily lived, but most obviously in the state of holy matrimony and in the state of consecrated virginity (of which clerical celibacy is the echo). The only “radicalization” found here is the radicalism of love itself, which wishes to give all to the beloved.

Thesis 9. The leap into other realms. Since other justifications no longer held, Paul VI exalted celibacy spiritually.

Response: Celibacy has been exalted by many great spiritual authors, not just Church authorities. Paul VI would have considered himself last and least within a powerful tradition.

Thesis 10. It works without celibacy too. In the Eastern Catholic churches there are married Catholic priests as a matter of course.

The Eastern churches place more ecclesiological emphasis on the bishop, who must always be celibate. Ironically, since the East is always boasting of its antiquity, the Western practice harks back to the earliest way of looking at priests, namely, as “substitutes” for the bishop in places where he could not be present for liturgy. The Roman Catholic priest bears more clearly the image of the bishop, who, representing Christ par excellence, is wed to the Church alone.

Thesis 11. Ever more exceptions. Protestant and Anglican pastors who convert to Catholicism receive priestly ordination with a papal dispensation.

Response: Married convert clergy often defend the practice of celibacy for both practical and speculative reasons. I recommend “The Gift: A Married Priest Looks at Celibacy.”

Thesis 12. Developments in sexuality. Since the Second Vatican Council, marriage is seen as an image of the covenant between Christ and his church and cannot be the reason to prohibit priestly service.

Response: St. Thomas Aquinas, among other great theologians of tradition, already presented the loftiest theology possible of matrimony as a sacramental representation of the union of Christ and the Church. It is absurd to say marriage has not been appreciated until Vatican II. One would expect an author who takes “Vatican II” as his badge to embrace the “ressourcement” or return to the best sources of Christian theology, rather than proclaiming deracination from the past.

Thesis 13. Not a dogma. Catholic church teaching allows for the abolition of celibacy at any time.

Response: The Catholic Faith is made up of many things that are not “dogmas” in the strict sense, the removal or optionalizing of which would nevertheless cause great harm to the fabric of the religion. See canonist Ed Peters on why we should not trivialize Church discipline. This is all the more true, the longer it has endured.

Thesis 14. Dangerous promises. Obligatory abstention from marriage is a risk factor with respect to sexual abuse by priests.

Response: We have now seen report after report about sexual abuse in Protestant communities, among the Eastern Orthodox, Mormons, Jews, Muslims, atheists, and Boy Scouts. Avoiding abuse is not about being married, but about being chaste in any and all states of life.

Thesis 15. Weighing goods. Faced with a choice between ameliorating the priest shortage or retaining celibacy, the Church must decide in the interest of the Eucharist which is necessary for salvation over celibacy which is not.

Thesis 16. The old system has come to an end. The abolition of celibacy as an instrument of retaining power must be part of a foundational reform of the hierarchical clerical system.

Response: Indulging in Marxist-flavored canards about clericalism betrays a mentality of postmodernism, which distrusts authority and discipline in principle. For those with such a perspective, ontological distinctions in ministries and states of life are seen as inherently contrary to human dignity in a democratic age.

In short, Zölibat: 16 Thesen is the work of a Wolf in scholar’s clothing. In spite of its crippling weaknesses, however, Fr. Ruff regards Wolf’s work in a kindly light: “This [book] seems intended as a somewhat provocative or even polemical statement of the author’s strong opposition to mandatory celibacy. In the context of the upcoming Amazon synod, ongoing scandals, and Pope Francis’s efforts to renew and reform the church, the book is timely.” Be that as it may, more timely still would have been a book that clarifies and defends the truth.

Fortunately, such resources already exist. The best introduction is Cardinal Alfons Stickler’s compact but wide-ranging The Case for Clerical Celibacy: Its Historical Development and Theological Foundations (Ignatius, 1995). Three other important works are Fr. Christian Cochini’s The Apostolic Origins of Priestly Celibacy (Ignatius, 1990), Fr. Gary Selin’s Priestly Celibacy: Theological Foundations (CUA Press, 2016), and Fr. Carter Griffin’s Why Celibacy?: Reclaiming the Fatherhood of the Priest (Emmaus Road, 2019). We must gear up for the all-out war against celibacy that is now brewing.