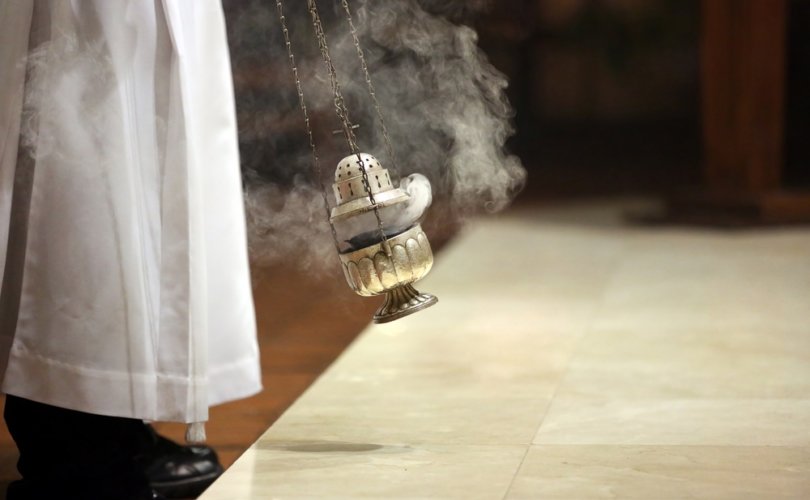 February 20, 2018 (LifeSiteNews) – For some time it has been fashionable, especially in academic circles, to maintain that religious doctrines and rituals may ultimately be reduced to a set of basic symbols and symbolic actions that are held to be universal and interchangeable among all religions—an underlying language of the divine.

This sophisticated reductionism maintains that all religions and their holy writings represent, at bottom, the human imagination’s (more or less successful) attempt to come to grips with unfathomable cosmic mysteries. To this way of thinking, religion is a thing produced out of man’s own mind, expressing his own thoughts and desires. Hence, one may not judge religion to be true or false, or say that this religion is true or truer than that one; they are all just different symbolic systems.

Before I reply to this claim, it seems necessary to insist on a point that would once have been obvious: the Catholic Faith is not hostile to symbols and symbolic actions, but has, on the contrary, always made a broad and constant use of them. Until the questionable liturgical reforms of the twentieth century, which tended to be accompanied by a modernist and minimalist aesthetic that elevated verbal and cerebral content over more intuitive, subconscious, visceral expressions of the sacred, Catholic worship had always been a veritable pageant of symbols, which spilled over into daily life. Fortunately, much of this lost dimension is being rediscovered by younger generations who are hungry for the meaning that only such a rich panoply of spiritually-charged signs can give access to.

Examples of Catholic symbols are everywhere to hand: the water and oil of baptism, the bread and wine of the Eucharist, the candles and flowers on the altar, the oil used for anointings, the rings exchanged with the matrimonial vows, the evergreen Advent wreath and Christmas tree, colorful Easter eggs. Whenever and wherever it flourishes, Christian culture bursts over with sensual symbols of heavenly realities, outward signs of invisible grace and truth. At the very heart of our worship stand the seven Sacraments, which are perceptible signs imbued by God with the astonishing power to confer upon the recipient the very grace they signify.

Consequently, not only is the Catholic Church not an enemy of symbolism, she is a lush garden in which symbols thrive with a greater richness and variety than in the most dazzling poetry of the human imagination or the most developed rites of pagan religions. If ever there were a religion that speaks to the imagination as well as to the intellect—or rather, which speaks to the intellect by means of the imagination—it would surely be the Catholic Faith. Those who are thirsting for the sacred, who would see and hear the sublime mysteries of the cosmos and of the supernatural world, could do no better than to attend a traditional Latin High Mass (the so-called Extraordinary Form or usus antiquior). There they will see creation gathered up and offered in a sacrifice of praise to the Father, Son, and Holy Spirit, the transcendent God whose word established the heavens and the earth and all that is in them.

But let us return to the claim that religion is nothing but symbolism. Once you explain the “inner meaning” of the “external symbols,” you will have shown (according to this view) what Catholicism has in common with other religions, and then you have disproved its claim to be the unique way of salvation.

A prominent supporter of this line of argument, or at least one whose ideas are often brought forward in support of it, is the psychoanalytic pioneer C. G. Jung, who developed a school of analyzing religious symbols and the contents of dreams as pre-existent archetypes with which the human mind is naturally equipped and through which it comes to grips with reality—a sort of natural religious language that can be tapped into, channeled, and shaped for the psychic health of the organism.

There is some truth to Jung’s approach. Religious language is natural to man, in the sense that it is natural to the human person to turn to God and seek Him out; there is planted in everyone’s heart a natural desire for knowledge of the deity and a natural attitude of reverence towards what is perceived as holy or sacred. At least in its uncontaminated purity, conscience gives expression to the moral law implanted in the heart, which is planted there by God. Moreover, psychological health does depend on being aware of this fundamental orientation to the divine, not only accepting it but cultivating it, following it where it leads, and never accepting half-truths but always searching for the fullness of truth. Anything less than the full truth is unworthy of man and will be instead a source of emptiness, confusion, and frustration.

Nevertheless, one must tirelessly point out that all religions cannot be equally true, not even the ones that are most ancient and most widespread, for they offer incompatible accounts of the ultimate realities—for example, of the nature of God, the source and goal of human life, the sinfulness and salvation of man, the value (and even the reality) of the body, the meaning of suffering and death, and the like. One’s heart cannot be at rest until one has discovered a coherent and satisfying set of answers to the most fundamental questions, and has seen that other possible answers are false or faulty. There is no such thing as “religion” in general; there is this definite religion and that. One must choose.

The Catholic Faith proffers facts of revelation, facts of the life of Jesus Christ and His saints—facts that have to be accepted or rejected. It is a religion based not on universal or generic symbols but on specific and decisive interventions of God in history, interventions which endow things not only with an outward symbolic meaning but with an inner transformative power.

Similarities at the level of symbolism, at times even remarkable similarities, indicate that it is impossible for all religions to be altogether false; all of them have “picked up on” one or another aspect of reality and are giving expression to their insights. The question, then, is precisely this: which religion is true, that is, which one offers the true account of reality as a whole—of man and God and their relationship?

Not surprisingly, this religion’s symbols will also be the truest, the most accurate, the most profound, the most all-encompassing; but that is because they give expression to something still more elementary, more fundamental, than symbols—namely, the realities of which the symbols are symbols. In the final analysis, one cannot have symbols suspended over nothingness. There must be doctrine, there must be a definite teaching that the symbols represent and enshrine; there must, in short, be a creed.

People in our modern world need to be reminded that there is not, has never been, and will never be someone who lives without a creed. Everyone has a creed, a system of beliefs accepted on trust, a “philosophy of life” that could, at least in theory, be articulated in propositional form. Religion is inherently doctrinal and moral, or it does not exist at all. The only valid question is: Does a man have a defensible creed or a ridiculous creed; a good way of life, or an evil way of life? Are the symbols he lives by dense and profound, or scattered and superficial?

It is good to get around the rationalist fallacy that there is such a thing as a person without religion, or a religion without doctrine. In the end, every man is religious, after his fashion, just as every religion is doctrinal, after its fashion. There are only two sorts of people: the genuinely religious and the superstitious or idolatrous. The possession and appreciation of symbols does not play the chief role in distinguishing them from each other.