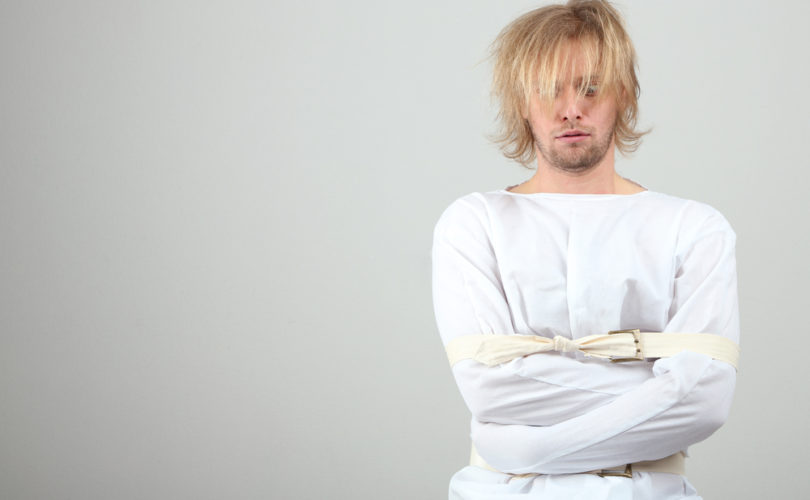 'When you start believing that the opinion of others are a pathology, then you are in the beginning of the stage that leads to the secret police and the gulag.'

A year ago at the Festival of Dangerous Ideas in Australia, I watched with interest as Christian commentator Peter Hitchens debated with a panel of people dedicated to the Sexual Revolution—radical feminist Germaine Greer, journalist Hanna Rosin, and the popular and much-published pervert Dan Savage.

As the token conservative on the panel, Peter Hitchens was constantly forced to defend the most basic civilizational concepts, from the value of marriage to how we treat our children. But one exchange with Dan Savage really stood out to me. That was when Savage responded to Hitchens by accusing him of being “paranoid and projecting.”

Christianity, apparently, is nothing more than something one needs to go to rehabilitation for, a mental disorder requiring extensive detoxification. Which is precisely why courts are increasingly trying to send those who dissent from the New Moral Order of the Sexual Revolution to rehabilitation and mandatory diversity training.

Hitchens interrupted angrily: “This is the intolerance! Because I hold an opinion different from his, he has suddenly become a qualified pyscho-analyst who can tell me that my opinions are opinions which I am entitled to hold, but are a pathology—and this is the absolute seedbed of totalitarianism. When you start believing that the opinion of others are a pathology, then you are in the beginning of the stage that leads to the secret police and the gulag. You cannot imagine that anybody else is entitled to hold a view different from yours without believing that he has some personal defect.”

Or as the late great William F. Buckley said, “Liberals claim to want to give a hearing to other views, but then are shocked and offended to find out that there are other views.”

When Buckley made his witty comment, our culture was still in many ways oriented by residual Christian values. The anger of Peter Hitchens, however, is well-warranted today, as atheist clean-up crews and totalitarian progressives try their very best to root out every cultural symbol with any marginal connection to Christianity. While the Australian crowd laughed loudly at the suggestion that Christian beliefs might be suppressed (how quickly we forget history!) and Dan Savage protested loudly that he was, in fact, tolerant, a brief scan of left-wing news prove that Hitchens’ fears are far from paranoid.

Just a couple days ago, The Daily Beast ran an article titled “Why Are Millenials Unfriending Organized Religion?” It turns out that physicist Lawrence Krauss, a close friend of late atheist polemicist Christopher Hitchens, had recently mused that our culture could be on the verge of extinguishing religion:

“Change is always one generation away,” he told the audience, referencing the rapid cultural shifts on gay marriage and slavery, “so if we can plant the seeds of doubt in our children, religion will go away in a generation, or at least largely go away. And that’s what I think we have an obligation to do.”

The author of The Daily Beast article notes that people do seem to have a psychological predisposition to religious belief, but just the same, the “bigoted” views of certain religious factions, such as those who oppose gay marriage, can be eliminated much more successfully. In other words, he says tolerantly, we don’t need to get rid of religion entirely, just gut it substantially.

Salon has also weighed in, declaring that “Duck Dynasty bigotry still has an audience—but not for long.” Atheism is no longer the end of a long road of self-doubt, the author crowed, but rather just the beginning—and atheists are even using religious traditions so they can still feel like life has meaning and enjoy paid holidays! Not only are atheists plundering religious traditions for activities that don’t include behavior modification or self-control, but Salon also notes that “Biblical sexuality is getting binned—finally.” This, apparently, is a good thing—regardless of the disease-ridden and corpse-carpeted mountain of evidence that the Sexual Revolution has been a colossal failure.

And then there’s this:

Recovering believers are reclaiming their lives. Most atheists and agnostics are former believers, which means that many carry old psychological baggage from childhood beliefs or some post-childhood cycle of conversion and deconversion. While many former believers slip out of religion unscathed, some do not, and believers in recovery now have a name: reclaimers. A small but growing number of cognitive scientists are exploring the relationship between religion and mental illnesses like depression, anxiety disorders and panic.

Christianity, apparently, is nothing more than something one needs to go to rehabilitation for, a mental disorder requiring extensive detoxification. It is a virus that requires treatment and recovery, rather than a set of beliefs rooted in Truth. Which is precisely why courts are increasingly trying to send those who dissent from the New Moral Order of the Sexual Revolution to rehabilitation and mandatory diversity training. Across Europe and North America, re-education camps (which our public school system and universities often qualify as) and classes are increasingly the government’s solution to the problem of the primitive Christians still in their midst, clinging to their antiquated beliefs with conviction that seems hard to shake.

I was chatting with one of my lawyer friends the other day, and he noted that one of the reasons our culture has shifted so dramatically is that the Left has been willing to fight like demons for every bloody inch of scorched territory, to suppress every mention of the name “God,” to create every newfound sexual right out of thin air, to purge all mention of our Christian heritage from the schools. Christians, on the other hand, have been far more eager to placate, to acquiesce, and to simply get back to the business of working and raising their families. And so, inch by inch, the Sexual Revolutionaries have backed us up into our churches and our Christian schools and our homes. And they are already trying to find ways to force their new “values” on us there as well.

Because if Christianity is in their eyes a pathology, a mental disorder, a temporary insanity, then there can be no religious freedom. They will not be satisfied as long as religious institutions teach and adhere to Christian beliefs, while churches that cling to orthodoxy still preach timeless truths, and while parents still teach their children that the Sexual Revolution was a bloody, horrific mess. So they will try, as they already are, to push harder and longer.

And we are going to have to push back.