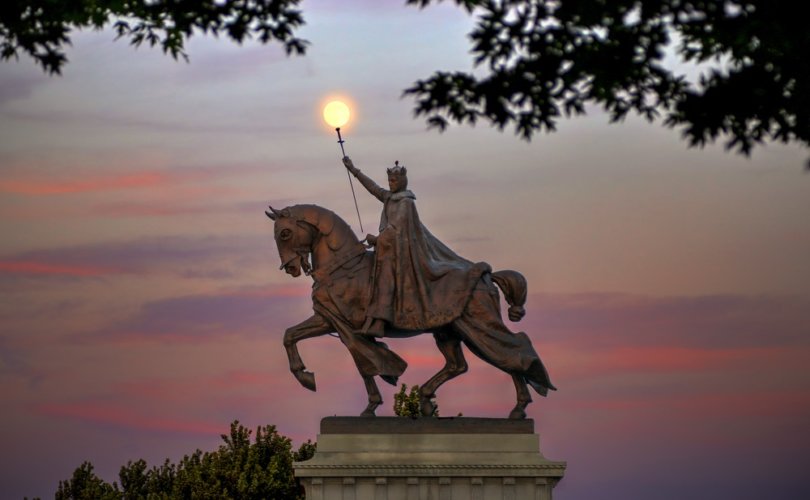 As the formerly Christian West is sliding further into the tyranny of liberalism, it is balm to the soul to consider that the people in Louis’ France were freer than we are today. They were free from big government meddling in their lives and their wallets. And they were free in the most important way, for Saint Louis believed in a Christian order wherein the State was neither inimical nor neutral to the Church, but was the Church’s helper in securing the happiness, temporal and eternal, of her subjects. Our modern “freedom,” by contrast, is servitude.

Sadly, it seems that the rulers of the Catholic Church were embarrassed by the example of this great king. In her article “Theological Principles that Guided the Redaction of the Roman Missal (1970)” in The Thomist 67 (2003), the great liturgical scholar Lauren Pristas wrote, inter alia, about modifications that were made in the liturgical reform to the centuries-old Collect or Opening Prayer of his Mass.

The old prayer read (and, where the traditional Latin Mass is celebrated, still reads):

O God, who didst remove blessed Louis, Thy confessor, from an earthly kingdom to the glory of the heavenly kingdom, grant, we beseech Thee, through his merits and intercession, that we may be consorts of Jesus Christ, thy Son, the King of kings, who with Thee liveth and reigneth …

The new prayer, drafted in the late sixties, reads:

O God, who brought Saint Louis from the cares of earthly rule to the glory of a heavenly realm, grant, we pray, through his intercession, that, by fulfilling our duties on earth, we may seek out your eternal Kingdom.

The original collect for Louis does not explicitly mention his rule as king. This is supplied in the revision — but, again, in terms more reflective of our historical circumstances than his own. The revision may have been designed to accommodate a modern mentality. Its effect, however, is to obscure the truth that holiness is found in persons of every age and social rank. Henry and Louis were not simply entrusted with the care of earthly government; they were Christian rulers who became holy as they ruled because of the Christian way in which they ruled.

The change in the petition of the revised collect for Louis is striking and shares common features with the new oration for Henry. The 1962 prayer for Louis begs that we may have partnership with Christ who is the King of kings — here, particularly, the King of King Louis — whereas the revised text asks that we may seek, but does not specify that we also find, “your eternal kingdom.” The petition of the revised text, therefore, is stunningly effete in comparison to that of the original collect which seeks nothing less than full incorporation into Christ. Similarly, the old collect for Henry begs that God make us attain unto, or reach (pervenire), himself, whereas the new version asks only that we hasten (festinimus) unto him. The verb pervenire stipulates arrival, festinare does not. A second feature common to both revised collects [i.e., Louis’s and Henry’s] is a new emphasis on the things of this world which, in addition, are presented in a wholly positive light.

Pristas lastly notes that the original Collect begs that we may reach the King of kings in heaven by the merits  and intercession of St. Louis; in the new Collect, merits have gone strangely missing.

The Secret and Postcommunion of the traditional Mass for St. Louis are equally eloquent. The Secret reads:

Grant, we beseech Thee, O almighty God, that as blessed Louis, Thy Confessor, spurning the delights of the world, strove only to please Christ, his King, so his prayer may render us acceptable to Thee. Through the same Lord Jesus Christ Thy Son, who liveth and reigneth …

“Spurning the delights of the world” was the kind of “negative” language that (as Pristas demonstrates in the same article) was systematically removed from the Novus Ordo missal. “Striving only to please Christ the King” is no less awkward for a mentality that no longer sees the Incarnation as the center of Church life, human history, and the entire cosmos. Inevitably, this prayer had to go; it will not be found — even in bowdlerized form — in the new missal. The Postcommunion strikes a militant note:

O God, Who didst make Thy blessed Confessor, Louis, wonderful on earth and glorious in Heaven, constitute him, we beseech Thee, the defender of Thy Church. Through our Lord Jesus Christ Thy Son, who liveth and reigneth …

God exalted on Earth a Christian king who used his authority to promote the Faith, our greatest good here below, and to care for His people, including the poor and the imprisoned. In this way Louis is absolutely opposed to the modern democratic perspective that privatizes and relativizes religion, while fostering a humanistic “care” for the disadvantaged that does not respect their dignity or their supernatural destiny. The prayer also asks God to make Louis a heavenly defender of the Church. Defense is only for those who have belligerent enemies. Not surprisingly, this prayer, too, was cut from the new missal.

It’s also worth pointing out, in passing, that the custom had developed of honoring the Blessed Trinity at the end of all three orations (Collect, Secret, and Postcommunion) with a full doxology. With typical reductive antiquarianism, the liturgical reformers chopped off the doxologies from the Prayer over the Offerings and the Prayer after Communion. In this way was obscured not only the acknowledgment of the Trinitarian nature of all Christian prayer, but the lordship of Christ: “who lives and reigns.” The full doxology, which is multiplied in the Tridentine liturgy (it appears in the prayers at the foot of the altar, the orations, the Offertory prayers, the prayers before Communion — all of these abolished in the new rite of Mass), thus serves as a continual reminder that Christ, as God and man, is King of kings and Lord of lords — a lesson we need to hear today more than ever.

A 35-year-old priest, Fr. Dylan Schrader, is not embarrassed about the kingly glory of St. Louis or the kingship of Christ. Fr. Schrader has collaborated frequently with Fr. Samuel Weber, OSB in the writing of hymns that can be sung to traditional chant melodies. Here are lyrics composed by Fr. Schrader for today’s feast (via email communication from Fr. Samuel):

Most Christian king and man of God,
Saint Louis, lover of the poor,
You served Christ’s lowly ones on earth
And reign with him forevermore.

Rise up, O prince and champion,
Campaign for Christ the Lord again,
Whose cross and nails and thorny crown
Defeat the tyranny of sin.

Defend this Church, which bears your name,
Her shepherd, and your city, too;
Bid love of Christ our hearts impel,
Our thirst for righteousness renew.

Be faith our shield and hope our helm,
Be charity our breastplate, Lord,
Your truth a Iight unto our feet
And sharper than a two-edged sword.

O Father, Son, and Holy Ghost,
One only God whom we adore;
By grace guide pilgrims home to you
To dwell in glory evermore.