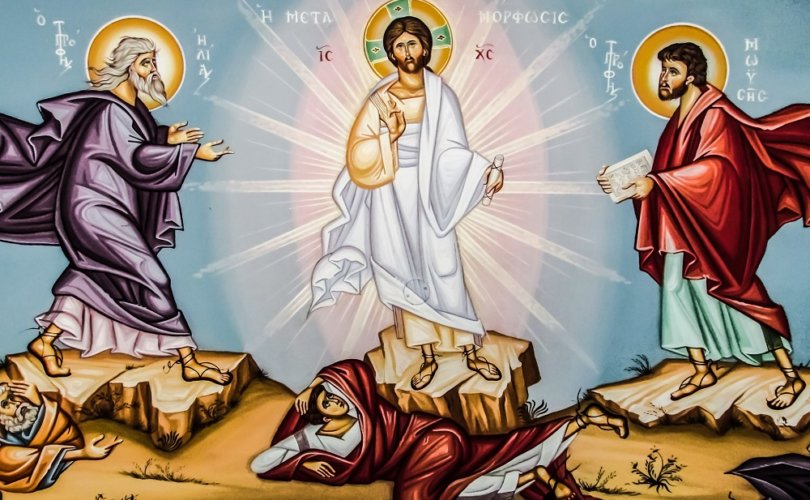 August 6, 2019 (LifeSiteNews) — Today the Church remembers the Transfiguration of Christ on Mount Tabor. Although the Gospel of the Transfiguration is also read on the First Sunday of Lent, the Church in her wisdom wished to give us a separate opportunity, outside a penitential season, to enter into the timeless meaning of this event.

Centuries of Christian civilization and fine art can make believers so accustomed to beautiful depictions of biblical stories that we lose a sense of the shock and dismay that accompanied these events when they first happened. This is no reason to abandon the art or the culture that produced it, but it is a reason to pause and ponder what it must have been like to be there.

The Gospel accounts of the Transfiguration do not shy away from telling us about the fear and confusion that seized the three hand-picked apostles who ascended the mountain with Jesus, as they beheld the glory of His divinity shining through His humanity, and heard the thundering voice of the Father. It was not a pleasant picnic with a scenic mountain vista, but a humbling, searing, unforgettable experience. Much later on, St. Peter would write in his first epistle:

For we did not follow cleverly devised myths when we made known to you the power and coming of our Lord Jesus Christ, but we were eyewitnesses of his majesty. For when he received honor and glory from God the Father and the voice was borne to him by the Majestic Glory, “This is my beloved Son, with whom I am well pleased,” we heard this voice borne from heaven, for we were with him on the holy mountain. (2 Pet 1:16–18)

At the time it occurred, however, Peter and his companions by no means understood what was going on. Peter proposed to erect booths or tents for Moses, Elias, and Jesus. “He knew not what to say, for they were exceedingly afraid” (Mk. 9:6). The patristic author Origen suggests that Satan was at work here, as elsewhere in Peter’s impetuous career (cf. Mt. 16:23), with an offer of comfort or delay:

It should be considered whether perhaps Peter spoke this in an excessus mentis [a temporary madness or ecstasy], by the motion of a certain spirit not his own — namely, whether perhaps that spirit who wished, as far as in him lay, to be a stumbling-block to Christ, so that He might shrink from that Passion which was the salvation of all men, did not here work as a seducer and wish under the color of good to prevent Him from condescending to men, from coming to them and taking death upon Himself for their sakes. (cited in St Thomas Aquinas, Catena Aurea on Mark, 9, §1)

Origen could be right, but it seems more likely that Peter was simply overwhelmed and said foolish things in an effort to do something — for he is more of a doer, rather than John, who is more contemplative.

St. Luke (9:31) preserves for us the precious detail that it was the mystery of Christ’s saving death and resurrection, His humiliation and glorification, that Jesus, Moses, and Elias were conversing about. The lawgiver and the prophet were speaking to their Lord “of His departure” — exodos in Greek, excessum in the old Vulgate, “decease” in the Douay-Rheims, and “death” in Ronald Knox’s version — “which He was to accomplish at Jerusalem.” Christ was speaking of His going out of the land of slavery on behalf of fallen man, out of this world of sin by His death and resurrection, in a superexcessive manifestation of the divine love that knows no beginning and no end.

In his commentary on Luke 9:31 — “they [Moses and Elijah] spoke of his departure, which he was to accomplish at Jerusalem” — St. John Chrysostom says Christ called upon His servants Moses and Elijah “to show forth the glory of the Cross, in order to console Peter and the others who feared the Passion.” The exodus of Christ would be one of unspeakable suffering (passio). This suffering puts a man outside himself, observes St. Thomas:

For just as a cup of wine makes one drunk, so too passion by its bitterness places a man, as it were, outside himself [quasi hominem extra se ponit], as we read in Lamentations 3:15: “He has filled me with bitter things, and made me drunk with absinthe.” And the Lord used this manner of speaking when He spoke about His Passion, as is evident in Mt. 26:39: “Let this cup pass from me.” (Sent. IV.8.2.2.2)

Indeed, for Aquinas as for other medieval authors, the mystery of the Passion is most directly expressed in the consecration of the wine into the redemptive Blood of the Lamb, and it is for this reason that older Western rites of Mass have the priest whisper “mysterium fidei” in the midst of the prayer over the chalice.

Peter’s excessus mentis or “being out of his mind” resulted from the great fear or amazement that seized him and his companions at the momentary unveiling of the eternal glory of the Son of God shining through mortal flesh. This certainly is not to be wondered at, when many passages of Scripture show that the manifestation of spiritual beings infinitely inferior to God — namely, the angels — provokes a fear no less profound. When the prince of the heavenly host appeared to him, Joshua “fell on his face to the earth, and worshiped, and said to him, ‘What does my lord bid his servant?’” (Josh. 5:13–14). Gideon thought he would perish for having seen the angel of the Lord face to face, but the Lord comforted him: “Peace be to you; do not fear, you shall not die” (Judg. 6:22–23). When Raphael disclosed his identity, Tobit and Tobias “were both alarmed, and they fell upon their faces, for they were afraid. But he said to them: ‘Do not be afraid; you will be safe’” (Tob. 12:16–18). Several such visitations occurred to the Prophet Daniel. The archangel Gabriel “came near where I stood, and when he came, I was frightened and fell upon my face. … And I was overcome and lay sick for some days” (Dan. 8:15,27).

In a vision that strikingly reminds us of the Transfiguration itself, Daniel relates:

I lifted up my eyes and looked, and behold, a man clothed in linen, whose loins were girded with gold of Uphaz. … So I was left alone and saw this great vision, and no strength was left in me; my radiant appearance was fearfully changed. … Then he said to me: “Fear not, Daniel, for from the first day that you set your mind to understand and humbled yourself before your God, your words have been heard, and I have come because of your words.” When he had spoken to me according to these words, I turned my face to the ground and was dumb. … And he said, “O man greatly beloved, fear not, peace be with you; be strong and of good courage.” (Dan. 10:5,8,12,15,19)

The mysteries of the Christian religion are strengthening and consoling, yes, but they are also, we must remember, fearful, awesome, and challenging. At Christmas, we remember “tidings of comfort and joy”; on the feast of the Transfiguration, we remember blinding light, amazement, bewilderment, and the voice of majesty that silences our all too human discourse.