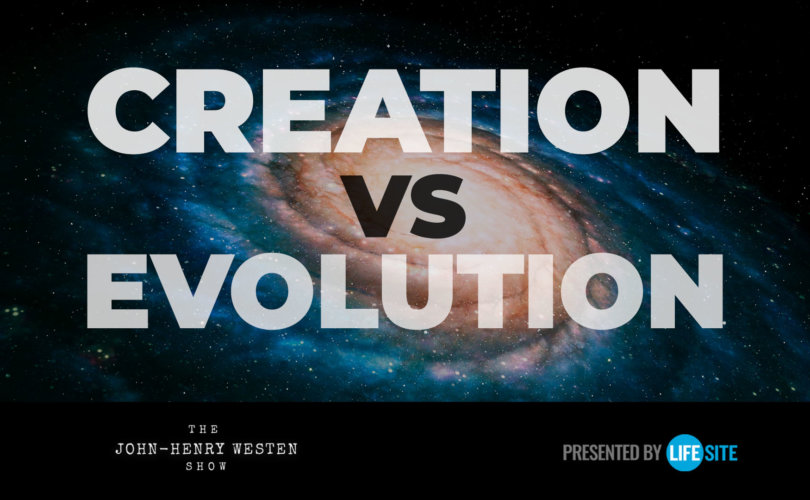 February 18, 2020 (LifeSiteNews) – “In the beginning God created heaven, and earth,” Genesis 1:1. The first words of the bible, and the first two chapters of the Bible focus on God’s creation of the Earth, it’s creatures, and of man himself. Yet, today, many Catholic are rejecting the teaching of God’s creation in favor of the idea that man evolved from molecules.

This is a relatively new debate in the Church when one considers the scope of history during which the creation narrative was widely accepted. In fact, when Darwin first wrote his theory of evolution, Blessed Pope Paul IX, called it a “tissue of fables” that didn’t even merit a refutation. What changed?

In 2000, Hugh Owen founded of the Kolbe Center for the Study of Creation, an apostolate dedicated to providing Catholic theologians and scientists who reject evolutionism and defend the Catholic teaching about creation. Today, Owen joins me on my podcast as I delve into the debate surrounding creation versus evolution.

Growing up, Owen’s father was a secular humanist who worked for the United Nations and the Planned Parenthood Federation. He saw overpopulation as the one issue responsible for all of the problems happening around the world. Owen lost his father at age 16 and believes he had a last minute conversion. Two years later, Owen found his faith and began his conversion to the Catholic church, a conversion he attributes to his father’s prayers from purgatory.

During his conversion, he was taught from the Dutch Catechism, which focused on natural science over Catholic Tradition, including the teaching of evolution.

“I consider it a very special grace obtain for me by the Blessed Virgin Mary that I never could really accept this idea completely, that anything that that we would learn new things that were true in natural science, they would cause us to change the teaching of the Church in faith and morals,” Owen shares.

His convictions led him to found the Kolbe Center in 2000. The center recently released a 17-part series called Foundations Restored explaining from a philosophical, theological, and natural science perspective, the Catholic doctrine of creation.

Owen highlights the importance, especially for Catholics to believe in the Church’s teaching on creation as it is more than just history but is a philosophical foundation for faith and life.

Although evolution and creationism are studied as natural sciences, neither really is. They cannot be supported by empirical evidence and are truly philosophical in nature.

Despite the Church’s teaching on creation and the clear dogma’s surrounding the origin of man, many Catholics, especially Catholic intellectuals believe in that man evolved from molecules. Owen points to Ernst Haeckel’s saying that human, fish, chicken, pig, turtle, and salamander embryos were almost identical at the same stage of development.

Haeckel’s evidence was a drawing of human embryo that he then copied and passed off as other embryos. Actual photographs of embryos from various animals and a human embryo at the same stage show his forgery and highlight the important differences and uniqueness of every species.

Learn more about Creation and other Evolution myths with Foundations Restored here.

This visual was accepted for quite some time and did a lot of damage. The visuals sparked the idea that a baby actually ‘evolves’ in their mother’s womb from a one celled organism, to a fish, to a reptile, and finally to a human. An idea that undermined the sanctity of life and opened the door to widespread abortion and contraceptives.

The underlying reason a person seeks death for their unborn child, their enemies, for themselves, is because they do not believe their life has value, Owen asserts. He continues to say that the evolution theory only fuels this thought process by removing the intrinsic value and dignity of life.

Owen also debunks many of the widely accepted scientific theories and explanations for our past. He talks about the ‘science’ behind the dating of the universe and the flaws in carbon 14 dating; empirical evidence supporting Noah’s flood, what actually happened to the dinosaurs, and so much more. He closes by focusing on the harm that evolution is causing in the Catholic Church. Pope Pius X called modernists and evolution the greatest threats to the Church. Owen sees this as true because modernists see the need for the Church to evolve as science evolves, allowing for a degradation of morals, a change in the fundamental truths about marriage, life, and family, and a change in the dogmas of the Church.

Without truly understanding the creation of man, many Catholics can’t understand the true character of God and understandably leave the Church. Owen shares the deep faith and conversions of young people that he sees when he shares the Kolbe Center’s new series.

“Young people can be given the truth and can understand that sound theology, sound philosophy and sound natural science confirm the truth of the sacred history of Genesis and the traditional doctrine of creation that is the foundation of our holy Catholic faith,” Owen tells listeners.

You don’t want to miss this episode with Owen. Even if you fully agree with and believe in creation as explained by the Catholic Church, you will learn something new in today’s episode! Find Foundations Restored here.

We’ve created a special email list for the show so that we can notify you every week when we post a new episode. Please sign up here: