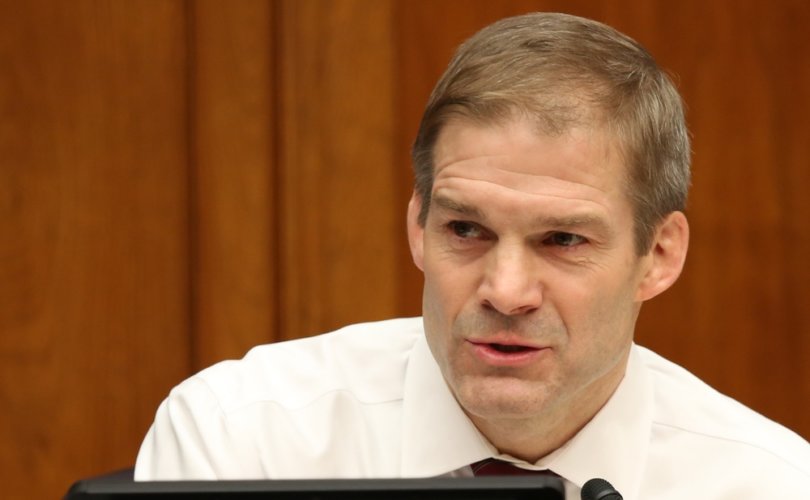 WASHINGTON, D.C., November 16, 2018 (LifeSiteNews) – As they prepare for their new role as a minority party, on Wednesday House Republicans elected Rep. Kevin McCarthy of California to be the GOP’s Minority Leader in the House of Representatives. He’s been Majority Leader under retiring Speaker Paul Ryan for years, so on the surface this may seem like a mere formality.

But the circumstances this year were anything but ordinary. McCarthy is part of the leadership team that not only failed to defund Planned Parenthood but approved multiple budgets, under Presidents Obama and Trump alike, that contained the abortion giant’s blood money. Obviously, he’s also part of the leadership on whose watch the GOP just lost the House to the Democrats.

Most significantly, this year there was a choice.

As LifeSiteNews covered, pro-life Rep. Jim Jordan of Ohio also ran for House GOP leader, and did so by explicitly making an issue of his party’s failure to keep its promises. He spoke out against the GOP’s pro-abortion budgets and failure to repeal Obamacare. He positioned himself as a productive ally of Donald Trump who was nonetheless willing to dissent when Trump strayed.

“This might be a tough pill to swallow, but I believe that if we’d handled the past two years differently, we would still be the majority party in the House of Representatives,” Jordan wrote after the midterms. “Part of the headwind our campaigns faced this year was an enthusiasm gap among our Republican base.”

“They are more passionate in their support for the President than for us. They perceive the President as fighting harder for their issues,” Jordan continued. But instead of learning from Trump’s 2016 victory, “we have largely been conducting ‘business as usual’ for the past two years, and we just paid the price.”

Several conservative advocacy groups backed Jordan, including Club for Growth, FreedomWorks, Tea Party Patriots, and For America. So did Conservative Review. Alas, House Republicans are apparently slow learners, as they picked McCarthy with 159 votes to a paltry 43 for Jordan.

Granted, the Swamp is far from drained, and it may well be that no amount of outside pressure could have gotten a majority of GOP congressmen to defy the establishment. But in light of how many times we’ve seen this play out with the same results, we need to have a frank discussion about why plenty of high-profile conservatives – and the vast majority of national-level pro-life activists – were nowhere to be found on the subject.

It’s all well and good that Sean Hannity endorsed Jordan on his show, but what did he do to dissuade Trump (with whom he reportedly speaks regularly, depending on who you believe) from throwing his weight behind McCarthy? How many subscribers to pro-life mailing lists even knew the leadership position was being contested, or that pro-life effectiveness was among the issues in contention? What might have happened if there had been a serious effort to mobilize pro-lifers to let their representatives know they wanted change?

Part of the problem is how much of the Right’s conventional wisdom is dominated by Beltway groupthink. Case in point: this week, Jim Geraghty of National Review (which increasingly seems to have traded in standing athwart history yelling stop for ambling beside history mumbling whatever) mocked Jordan this week for his “simple narrative” that just doesn’t understand the complexities of leadership.

The real oversimplification is Geraghty touting the Ryan/McCarthy House for passing the “third highest number” of bills and joint resolutions “in the last 30 years” as if good conservative governance measure success by volume of legislation (limited government? What’s that?), and absolving it of any responsibility for the healthcare trainwreck.

He gets one thing right, though: even when the House did the right thing, it fell apart in the Senate. It’s absolutely true that Mitch McConnell’s atrocious leadership is a much bigger problem pro-lifers have yet to confront, but Geraghty invokes it only to say that the legislative filibuster “isn’t going to change anytime soon,” so Republicans should just think of something else.

No! This is another blindingly obvious aspect of leadership: when you’re doing important work only for it to be squandered by colleagues in another department, or in this case another legislative chamber, you confront them about it. You address the problem until it’s resolved one way or the other. You don’t just trot it out in interviews when you need a scapegoat and then change the subject, like Ryan did.

It’s a damning indictment of the conservative commentariat that such rudimentary concepts are apparently foreign to its upper echelons…and of the pro-life movement that so few of us are having these conversations at all.

For two years, we had everything we needed to save an unprecedented number of lives with truly transformative policies. But we took a largely hands-off approach to the elected stewards of our cause, and now pro-lifers are back to chipping away at the margins.

What will we do with our next two years? Will we continue hailing ineffectual Republicans as “champions” and “strong pro-life allies,” or will 2018 finally be the year we take our own reassessment of business as usual? A new year is just around the corner, but early indicators suggest we’re in for more of the same.