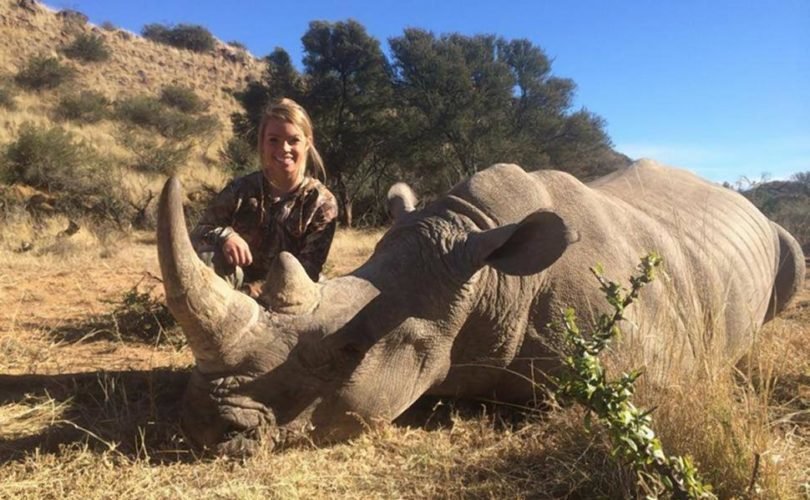 Remember that Texas cheerleader Kendall Jones, the one created an Internet firestorm by posting pictures of her hunting various animals in Africa? Well, her actions have flushed another animal out of the bushes: Democrat Mike Dickinson of Virginia, who is proudly revealing his moral high ground by offering a hundred grand for nude photos of her.

Here are just a few examples of the repulsive tweets Dickinson has been firing at his critics:

We criminalize those who go Thailand to trophy hunt teens for sex, yet allow #KendallJones to go kill animals in poor countries

(Really? “Trophy hunting a teen” is exactly what Dickinson is doing!)

100k bounty for nude photos or videos of #KendallJones expose this lowlife scum. She hunts animals, let’s hunt her.

Only the teabaggers celebrate #KendallJones for hunting animals but criticize me for hunting her. 100k for nude photos

On his Twitter feed he has responded to female detractors by calling them unattractive, making crude comments about their mothers, making overtly sexual comments about degrading oral sex, calling (oh the irony) Jones’ hunting pictures “obscene,” saying that she is going to hell, and comparing her to a serial killer. He also makes a number of specific requests for information on her sex life that I won’t bother to repeat here.

So we’ve established that he has the moral character of an intoxicated Howard Stern.

Revenge may be a dish best served cold, but then again, so is justice.