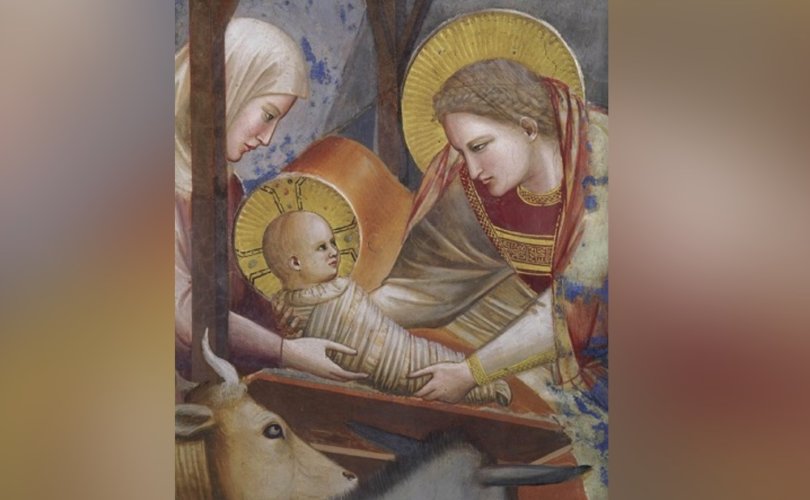 July 10, 2018 (LifeSiteNews) – Giotto di Bondone (ca. 1267–1337) holds a front rank among the great painters of the Western tradition. Giotto’s work shows a mastery of form, color, volume, spatial arrangement, dramatic appeal, emotional expressiveness, and spiritual depth. Although his influences are obvious (e.g., Cimabue and the Assisi circle), the alchemy he performs with them is, like Suger’s St. Denis in Paris, a miracle of transformation.

Giotto and Fra Angelico are often mentioned in the same breath as artists in whom one sees a marvelous confluence of medieval luminosity, Byzantine formalism, and a new awareness of naturalism and perspective. The resulting whole is greater than the mere sum of its parts. Giotto’s work stands poised at a magical moment when the naïve innocence of medieval art and the stable, hieratic framework of the icon are still the order of the day, but when artists have acquired a new eye for shading, nuance of brushstroke, and depth of human psychology.

In the image above, a detail from one of the many scenes painted on the walls of the Scrovegni or Arena Chapel in Padua, we see Our Lady holding the Christchild with tender love and reverent awe. Her serene face tells us that she has not suffered the pains of childbirth, while the bright eyes of her Son and His preternaturally upright head tell us that He is no ordinary mortal boy, but the Promised One who fully knows Who He is, whence He has come, and whither He goes. As in Byzantine icons, He is wrapped in swaddling clothes that hauntingly suggest burial linens; He is about to be placed in a manger that anticipates His tomb.

The Virgin’s almond eyes burn with the fervor of her adoration and love, as if she could not possibly get enough of the sight of her Child’s countenance. The maid assisting her, though less intense and more intent on serving, is ineluctably caught up in the same wonder, the joy that keeps silence because no words are adequate to the Word made flesh. Even the dumb ox, symbol of the lower creation in its brute force, seems to take its cue from the Virgin and turns into a contemplative, pleased to be an animal-in-waiting at the humble court of the Lamb of God.

What a contrast with another wall painting from the same chapel, this one depicting the slaughter of the Holy Innocents! Here, Giotto exploits the new sense of depth, bright colors, and emotional drama to pull his viewer into the horror of barbaric bloodshed. Herod stands above the very scene and commands the evil with full premeditation. His soldiers, large, clumsy, brutish, scarcely human, seek out, clutch, and butcher the children, casting their dead bodies into a mounting heap of sorrow, the future of the town laid waste. Mothers in tight formation struggle to escape, weep in helplessness, and surrender to their anguish. Their children have been torn from their bosoms, torn almost from their wombs.

The dignity of the boys is revealed in their nobly chiseled and highly individual features, reminding us that there is no such thing as a generic human being: each person is unique, made in the image of God, able to be remade in the image of Christ.

These particular boys, circumcised Hebrews of about the same age as the Christchild, are venerated by the Catholic Church as martyrs who died in His place and for His sake.

Giotto brings out all these aspects of the story and more, with an obvious understanding of and sympathy with the biblical story and the Church’s faith. This is what an artistic genius can do; this is what a great Catholic painter does.