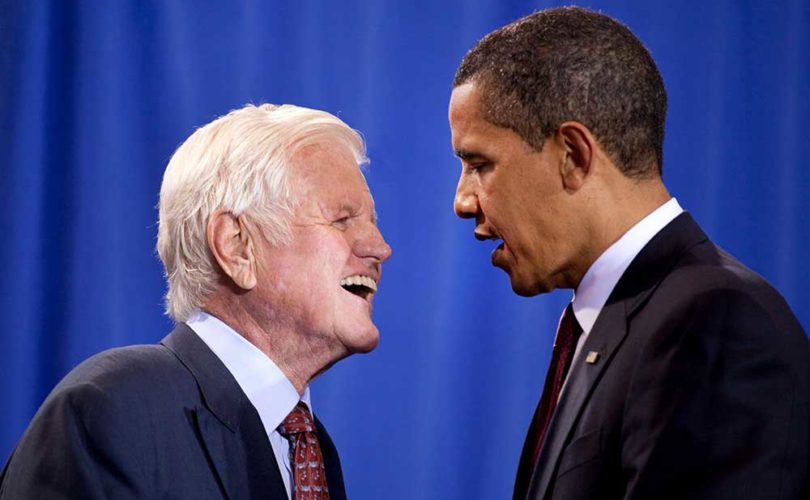 November 6, 2015 (LifeSiteNews) – This commentary, originally published August, 2009, is re-published in light of many concerning developments in the Church at this time. It was only one of numerous articles, by LifeSite and many others, including EWTN's Raymond Arroyo, critical of the elaborate Catholic funeral given leading US abortion and gay rights advocate, Catholic Ted Kennedy. The criticisms were also made because there had been no sign of any public repentance by Kennedy for his deadly advocacies.

These criticisms caused Fr. Thomas Rosica of Salt & Light and now also a prominent Vatican Press spokesman, to explode with anger and condemnations. Fr. Rosica launched a broad assault on pretty well the entire pro-life movement for being critical of the participation, in the internationally televised funeral, of Cardinals O'Malley (who trivialized Kennedy's abortion extremism and is now on the Pope Francis Council of advisers) and McCarrick (a supporter of gay civil unions who also deliberately misled all the US bishops on a crucial letter from then Cardinal Ratzinger). The funeral even included three eulogies, one by pro-abortion, pro-gay extremist President Obama, from the pulpit. Archbishop Raymond Burke firmly supported the right of Catholics to express their concerns about this scandal.

Beyond the reaction of Fr. Rosica, however, the article gives a glimpse of developments within the Catholic Church at the time that have resulted in so many aggressively pro-abortion, pro-homosexual Catholic politicians not being held accountable by the Church and therefore consistently being elected by Catholics in both Canada and the United States. Thus we have the Justin Trudeau led Liberals just elected into power by Canadian Catholics and in the US, Nancy Pelosi, Joe Biden and numerous other “Catholic” politicians also repeatedly elected to office. This appears to be especially a result of the votes of Catholics, imitating their bishops, many of whom by their actions and priorities, in practice indicated that militantly anti-Catholic moral positions are not a serious problem.

August, 2009 (LifeSiteNews) – I am not dismayed or downhearted, just amazed at the depth of human weakness and self delusion revealed by the Kennedy funeral. Let me explain, and also urge what should be the attitude of pro-life people be to this event.

It was a fascinating funeral with many touching moments and fine speeches. Ted Kennedy was shown to have presented in many ways a very attractive image – an exceptionally generous person, a good father, a faithful friend to many, an accomplished man of the world despite many personal setbacks and hardships.

For Kennedy, Obama, and many of the pro-abortion politicians at the funeral – image is crucial. They rely upon it to influence the public to trust them and to support their political goals. They know that the public can be lulled away from critical thinking and attention to facts if political image is well cultivated and presented.

As we have repeated a number of times in our coverage of Ted Kennedy’s illness and then death, we do not judge his relationship with God. No one can do that. But his public record is another thing. We can and must judge that. He profoundly helped to advance the Culture of Death and other developments harmful to life, family and faith in America.

As for the grandiose funeral broadcast around the world – the Mass, the Church, the priests and Cardinal O’Malley – all appeared to be merely useful props for the liberal establishment to exploit. That establishment was given the keys to do whatever they wanted.

However, the Catholic Church in Boston and Cardinal O’Malley totally capitulated. I felt embarrassment and shame for the good Cardinal.

Saint Kennedy was canonized with not even one appropriate reference from anyone during the entire proceedings addressing his extreme pro-abortion, pro-gay “marriage” record. By implication, or strong impression, everything that the senator from Massachusetts did in his political life was affirmed during that Catholic Church event.

The tyranny of moral relativism triumphed. The false, very selective, “spirit of Vatican II” social justice version of Catholicism dominated. The beatitudes taken out of context from the gospel can give false assurance and soothingly warp consciences for those who live personal lives in serious violation of that real gospel.

The message from the Boston Catholic Basilica event to all Catholic politicians, to all Catholics in positions of authority and to the world was clear. In the end, abortion doesn’t really matter. Same-sex marriage is not really an important issue. Church moral teachings in general are just talking points for consideration. And finally, the central teaching authority of the Church is an outdated concept. It does not matter what Christ, the Ten Commandments, the Pope’s and the saints have said. Image, worldly respect, your local bishop or priest friend or theologian trump all the other universal things of the faith. I do not at all mean to say that Cardinal O’Malley believes any of this. He does not. But he let this happen and gave the event his presence.

Much of what took place in the Basilica, regarding Kennedy’s political legacy, was missing real love and real charity. Christ showed what true love was and they crucified him for it.

Despite all this, and the Notre Dame scandal and much more of the same, we at LifeSiteNews will continue to do what we must. Pro-life, pro-family leaders will soldier on.

A few years ago in Toronto, the late Fr. Richard Neuhaus addressed the issue of what our attitude should be to disappointments in the pro-life struggle. He stated,

There are those in the pro-abortion camp who view their position as the progressive position. They are wrong. It is not progressive but barbaric.

In the First Things article, Scandal Time, regarding the clergy sexual abuse scandals, Neuhaus made some comments that would also seem pertinent to Church tolerance of pro-abortion, pro-homosexual “marriage” Catholic politicians. Neuhaus wrote,

I have been told that the proposition is “controversial,” but I suggest it is almost embarrassingly self-evident: if bishops and priests had been faithful to the teaching of the Church and their sacred vows, there would be no scandal. Those who would confuse the subject reflexively reach for complexity. No, I am sorry, it is as simple as that. We are reaping the whirlwind of widespread infidelity.”

And finally, a LifeSiteNews reader sent us this excerpt from an address by Archbishop Fulton Sheen to the Supreme Convention of the Knights of Columbus in June 1972,

“Who is going to save our Church? Not our bishops, not our priests and religious. It is up to you, the people. You have the minds, the eyes, and the ears to save the Church. Your mission is to see that your priests act like priests, your bishops act like bishops, and your religious act like religious.”

See detailed article by Fr. Alphonse de Valk on Cardinal O'Malley's participation in the funeral and his response to critics, Ted Kennedy's funeral: bishops in crisis