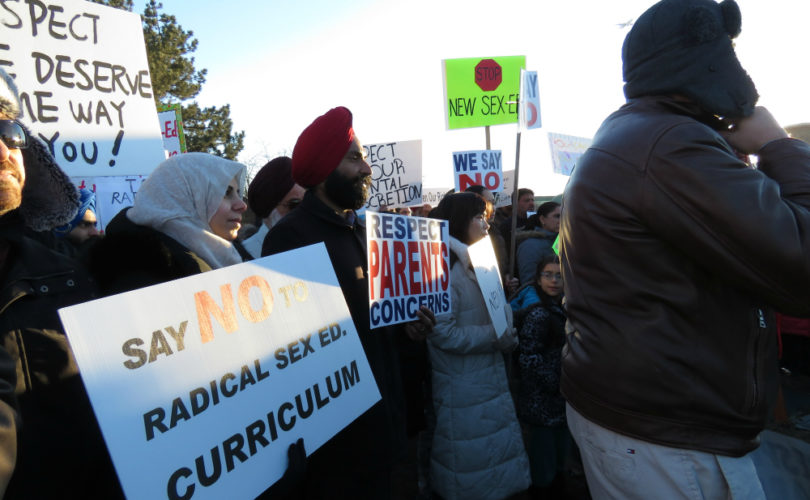 Sept. 11, 2015 (LifeSiteNews) – It may have been a long, hot summer, but Ontario parents do not appear to have blown off any steam. In spite of a barrage of advertisements promoting Premier Kathleen Wynne’s new sex education curriculum  on the radio—I could barely turn on the news in my car without having to hear a silky-smooth voice reassure me that the children of Ontario were safe in Wynne’s hands—the protests have gone on unabated.

In Wynne’s own riding of Don Valley West, 700 children were kept out of Thorncliffe Park Public School on the first day of classes—nearly half of the students—and on day two a full thirty percent still failed to show up. Chris Selley in the National Post noted that “if the Ontario sex ed protests are going to fizzle, they haven’t yet,” while the Globe and Mail mused that this could very well become a federal election issue.

There is an underlying story here, as well. The sex ed protests are not simply fueled by the usual suspects: orthodox Catholics and Protestants. Rather, it is an enormously diverse movement cutting right across cultural, ethnic, and religious lines. They are Buddhist and Sikh, Chinese and Filipino, Muslim and Christian. They all have one thing in common: They are not buying into the post-modern experiment, and they are not pleased at the idea that the new sexual orthodoxy that often directly contradicts their beliefs is being passed from the state to their children. They are a coalition of what Christian scholar Francis Schaeffer called “co-belligerents”—dissimilar, but united behind a goal.

Traditionally speaking, it has been Christians who defended Western culture against the self-loathing of left-wing secularists. But that was before the astonishing and sweeping success of the Sexual Revolution, the post-modern project: abortion on demand; the hollowing-out and then redefining of marriage; the celebration of hedonistic sterility and the glorification of childlessness.

We like to pride ourselves on being bastions of freedom and democracy. But instead the cultural exports of the West tend to be our new gender ideology, abortion and sterilization, Internet pornography, and Miley Cyrus. The institutions of our culture – the media, entertainment, academia, and politics – are now profoundly hostile to the Christian religion, even though Christian concepts provided the foundation for freedom and democracy in the first place.

Ironically, abortion is one of the main contributing factors to this new culture war. Since 1969, Canadians have snuffed out the lives of four million of their own children. To dismember and discard its own children is suicide for any nation – and often, the murdered and the missing are replaced with millions of immigrants from other cultures. Those cultures – as we are seeing on the streets in front of the offices of Ontario politicians and in angry speeches addressed to Premier Kathleen Wynne and her cohorts – do not feel favorable towards the Sexual Revolution or their adopted homeland’s attempts to indoctrinate their children into it.

Western values? Certainly, there are many that we expect new immigrants to embrace and adopt. But the last few decades have produced a new, different set of “values” that thousands across Ontario are rejecting firmly and loudly.

I have seen this in my pro-life work, as well. Immigrant communities are much more likely to be sympathetic to the pro-life message, as often their cultural backgrounds sync almost perfectly with the simple message we are putting forward. They are often horrified and shocked when they see photos of abortion victims, and aghast when they find out that the demise of these victims is funded and endorsed by the Canadian government. They are not familiar with the post-modern babble that dehumanizes and victimizes babies growing in the womb, and thus the concept of killing those babies seems to them, we have seen time and time again, foreign.

I’m sure Ms. Wynne and her fellow social engineers at the Department of Re-Education are fully aware of all of this. They know that in order for a worldview that often advocates sterility and childlessness to succeed and grow, it must inculcate the children of others to adopt it. Thirteen years of state-sanctioned education, with perhaps four years of liberal university professors to cement it all in, and the children of parents with traditional values will likely come out the other end with the same post-modern views as any other good secularist. The parents who have sparked Ontario’s new culture war are saying no to this—and their anger and persistence would seem to indicate that they are quite aware that they are fighting to preserve their own values, and those of their children.

It will be interesting to see how this all plays out. There really is no middle ground here. Kathleen Wynne and the Department of Education know that they must teach their values and their ideology, and are unflinchingly committed to doing so. The parents of tens of thousands of children are equally as committed, at least for the time being, to regaining the right to pass their own values on to their children. The myth of secular neutrality has been exposed very effectively. As Chris Selley put it in the Post:

And so it is. A thus-far-unstoppable force meets immovable object. And when the war is over the hearts and minds of children—the future, really—the fight is sure to be long and fierce.