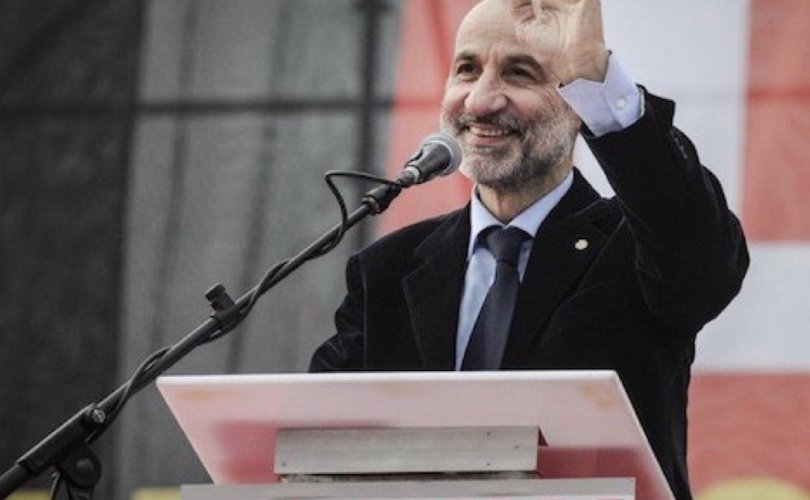 Italy’s two chambers of parliament and regional delegates have entered into what could be several days of secret ballots for a new president, for former President Sergio Martarello’s seven-year term is coming to an end. Italy has neither a popular vote nor a presidential race for candidates, leaving parliamentary electors free to vote for any Italian citizen over 50 of their choosing. While many consider the current prime minister, Mario Draghi, to be a frontrunner, the secret-ballot nature of the elections has sometimes led to surprising results in the past.

The role of the Italian president is largely ceremonial. However, it is the president who appoints the prime minister and other government ministers, leads the army, approves or disapproves legislation, and appoints a third of the constitutional court. He can also intervene in a national crisis and dissolve parliament.

For Italian Catholics, the one household name that promises a true implementation of Catholic social principles within politics is Massimo Gandolfini. Since 1997 Gandolfini has both directed the Department of Neurosurgery-Neurology in a hospital in Brescia and been a vocal political advocate for life and the family for many years. He and his wife have adopted seven children, one from Peru, two from Brazil, and four from Italy, and are now grandparents of four.

In a 2014 interview for the multi-lingual Home of the Mother/Focolare della Madre magazine, Gandolfini attested to the influence of John Paul II in the pro-life work he undertook.

“My pro-life commitment goes way back to my college days, but it ultimately took on a more serious character with John Paul II’s encyclical Evangelium Vitae,” Gandolfini told Home of the Mother.

“I felt personally [called], especially as a doctor, [by] the Pope’s words: ‘What is urgently called for is a general mobilization of consciences,’” he continued.

“I have witnessed in my own research and investigation that science (or honest reason) never contradicts faith. On the contrary, the two complement each other. I felt that this was my ‘vocation’ and the service I was called to perform, both in the Church and in the world. As the great Pope Paul VI reminded us, ‘We must evangelize the world of culture and science.’ I could not remain indifferent to these words, especially as a doctor.”   Fa

Throwing the weight of his medical and scientific knowledge behind pro-life work even beyond Italy, Gandolfini helped launch an initiative in Europe to oppose the use of embryonic stem-cell research, called ONE OF US. Explaining the campaign, he stated, “This is the fundamental argument to be explained and defended: the human embryo is not a mass of cells or biological material, nor is it merely a life in potential. It is a real life undergoing an autonomous and ordered development. It is ONE OF US. Our campaign is meant to ‘be the voice for those without a voice’. Our goal is to defend the unborn, those who are yet too small to make their voice heard and too weak to stand up for themselves.”

In defense of the family, Gandolfini, the president of the Family Day association, has organized public demonstrations throughout Italy for more than a decade. In 2016, a Family Day demonstration to oppose the legalization of gay marriage drew a reported two million people to the Circus Maximus in Rome. Speaking to the crowds, Gandolfini declared, “We are here to say that the family is not a place of violence and opprobrium but a reality of joy and welcome.”

In an interview preceding the event, Gandolfini explained the intention behind Family Day.

“Our first goal is to support the beauty of the family,” he said.

“We want to erase the politically correct stereotype according to which the family is only the place of great ugliness and constant injustices… The family founded on marriage between man and woman is the place of harmony, the best place to ensure that the love between a man and a woman can, among other things, contribute to the creation of a more civil and more honest society.”

Were Gandolfini to be elected President, he could serve as a strong influence on pro-life and pro-family legislation at a time in which Italy is struggling to remain strong on such issues. In support of Gandolfini as a potential presidential candidate, Italian Catholic newspaper Il Timone recently declared, “… that piece of Italy that sees in the family, in life and in educational freedom the founding good on which to rebuild a completely torn social fabric, already has a solid and uniting name, and it is that of Massimo Gandolfini, leader of Family Day, which has never succumbed to the (numerous) flattery of the parties and which, also for this reason, today embodies a mediator role appreciated by the center-right parties and by the CEI [ Italian Bishops’ Conference] itself.”