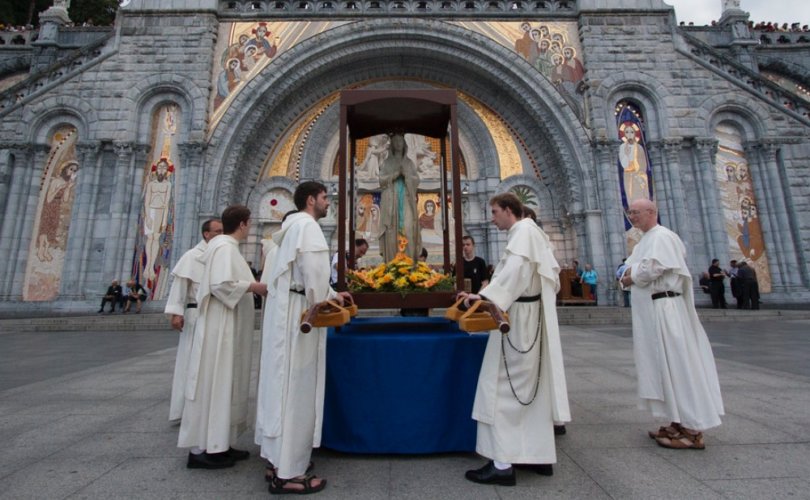 (LifeSiteNews) – In the old Roman calendar, August 4 is the feast of St. Dominic; in the new Roman calendar, it is August 8. Whichever calendar we are following, we should turn our minds at the start of August to one of our greatest saints, preachers, and religious founders, not only to ask for his intercession, but also to ask what he can show us today in our own situation.

At the very founding of his Order, St. Dominic saw that it was better for his few brethren to be scattered, to keep walking, to stay in motion, provided that their interior life was not scattered, was firmly rooted, at rest in God. When he proposed splitting up the small band and sending them to the four corners of Europe, they argued that he was dividing a delicate organism. His response is classic: Grain that is kept in a bin rots, but when it is scattered over the ground, it sprouts and spreads. He knew that their spiritual success depended on keeping an empty purse, a full heart, and restless feet, ready to bring the Gospel everywhere.

A “new evangelization” was put in motion in the thirteenth century by the itinerant mendicants (i.e., the wandering beggars), namely, the Dominicans and Franciscans, and it was a huge success, the effects of which are still with us today. But we seldom pause to ask why they were so successful, and why their success has waxed and waned over the centuries. It has everything to do with the radicalness of that original vision shared by Dominic and Francis — to follow in poverty the poor Christ — and the degree of fidelity to that radicalness.

When the communities were afraid of nothing and clinging to nothing, trusting in Divine Providence, focused on Christ crucified, they flourished. As soon as their priories became rich and comfortable, they lost their evangelical influence over the society and became another mouthpiece of worldly satisfaction. It is rather like the Baroque sacred music that began as a form of rhetorical praise and then veered off into emulating opera; emotionally it conjured up more the heroic castrato and his mock love-affair with the contralto than it did the Holy Sacrifice that unites earth to heaven.

Reform in the Church has always meant a certain simplification, remembrance of purity past, repentance for self-indulgence, a firm commitment to “follow naked the naked Christ,” as St. Thomas Aquinas described his goal, citing this phrase from Jerome three times (Contra retrahentes 15; Contra impugnantes 6; ST II-II, q. 186, a. 3, ad 3). The great religious founders help us to understand what simplification is — and what it isn’t. None of these founders tried to do religion “on the cheap.” When it came to churches, they built well, beautifully, sturdily, even grandly. Nothing inferior could be given to God, especially in the sacred liturgy. When it came to themselves, however, they stripped their lives of possessions, dependencies, distractions, fixed locations, striving to be as simple as possible in adhering to the supreme Good. Their goal was to abide in the one who ever abides.

In his book Staying Tender: Contemplation, Pathway to Compassion (Angelico Press, 2020), Fr. Luke Bell, OSB, has written some beautiful lines on the two kinds of abiding, which on the surface seem contrary, but which point to a more profound unity. St. Benedict perfectly illustrates and inculcates the first kind, St. Dominic and St. Francis the second kind. First, the ideal of the patriarch of Western monasticism:

The contemplative tradition is about abiding in this Absolute and finding life therein, a life that is in an open-hearted communion with others in the depth of their being. It is about abiding and it abides. Its practice is characterized by abiding. One of the vows a Benedictine monk takes is that of stability: that he will abide in the monastic life, and normally in one place, for his whole life. It is perseverance in this, not learning or practical skills, that determines if someone can become a Benedictine…. Once he has become a monk he should normally abide in the enclosure of the monastery and things there should be arranged so that as far as is possible all that is needed will be within that enclosure…. All of this is a practical expression of a spiritual truth: that God abides and by abiding in Him we find life and love. As the monastery is the place of worship of God and of prayer — both because of how it is ordered and because of who is there — it represents the New Jerusalem where God is all in all. Abiding there in the right spirit (which is basically not a complaining spirit) is a means of abiding in God.

Then, Fr. Bell turns to the more paradoxical case of the mendicant friars, sons of Dominic and Francis, whose way of life would seem to contradict the above sublime account of religious life:

The spiritual truth that has its expression in perseverance in the monastery can also be expressed by not abiding anywhere in this world. Mendicant friars are always moving to a new place, always on a pilgrimage, because nothing in this world abides as God abides. While a monk will allow abiding in one place to point beyond itself to abiding in God, a friar will let abiding in God alone teach that “here have we no continuing city, but seek one to come.” Spiritually they are identical in their rootedness in God, the one signifying this by being in one place, the other by not being in one place. The created world both shows and conceals the divine and so can speak of it both positively and negatively. It images abiding in God in a settled place of residence; it shows, through those whose lifestyle is itinerant just as their Lord’s was, that it cannot offer the absolute abode which is God alone. (pp. 13–14)

The lay faithful can learn a lot from both modes of abiding, which are lived to the fullest by those who have consecrated everything to Christ. On the one hand, there is an interior attitude of perseverance that corresponds to Benedictine stability. We stay rooted to our calling, our spouse and children, our family responsibilities, our work, our good works, come what may, and in spite of obstacles, which will never be absent.

On the other hand there is a placing of oneself at the disposal of God’s will that corresponds the detachment and mobility of the mendicants. The laity, to be sure, are not supposed to be always “in flux,” always “on the move,” as this would be unhealthy for most families (to say the least). But we can live in this world as if we are not immersed in it, we can pass through it as if we are not wedded to it, we can order our ever-shorter days to the everlasting Day of the Lord — and in this way, what we are, what we do, what we suffer, will not rot from selfishness, but will sprout and spread in the fecundity of love.