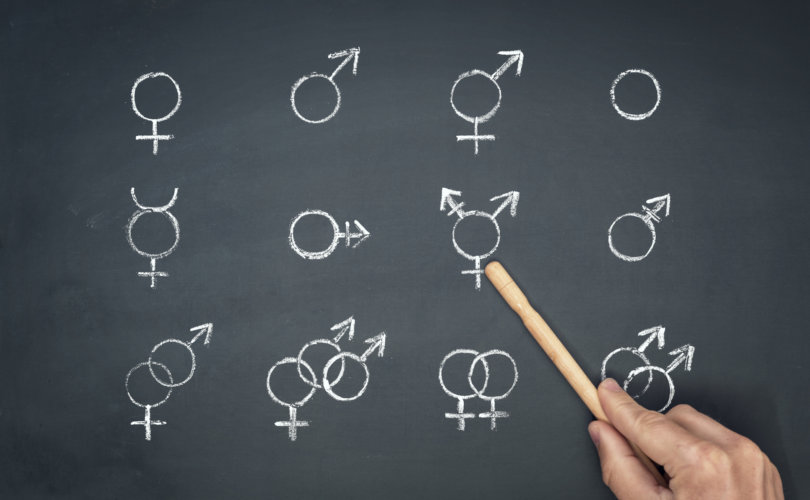 (LifeSiteNews) – Christopher Rufo is one of a handful of activists – along with Matt Walsh, Katy Faust, Laila Mickelwait, Libs of Tiktok, and a handful of others – who is proving that it is possible to successfully launch a movement opposed to the sexual revolution. His reporting consistently exposes how far the rot of gender ideology has spread inside the public school system, and his journalism regularly attracts attention from the authorities.

In his latest viral report, Rufo published a guidebook released by the San Francisco Unified School District “encouraging teachers to facilitate secret child transitions and to affirm students who use the gender pronoun ‘it’ at school – which, the district says, is the gender-identity version of the ‘n-word.’”

Rufo, as usual, presents his receipts in a Twitter thread replete with screenshots that prove his allegations. “The district teaches students that they can diverge from ‘vanilla sexuality’ and become part of the ‘bisexual umbrella,’ with sexual identity options including ‘fluid,’ ‘pansexual,’ ‘omnisexual,’ ‘homo-curious,’ and ‘hetero-flexible.,” Rufo noted. “The district also released a guide on ‘affirm[ing]’ students who use ‘it’ pronouns, explaining that it ‘has a long history being used as a slur to dehumanize trans and gender non-conforming folks,’ but can be ‘reclaimed,’ as African-Americans have done with the ‘n-word.’”

SCOOP: San Francisco Unified School District has released a guidebook encouraging teachers to facilitate secret child sexual transitions and to affirm students who use the gender pronoun “it” at school—which, the district says, is the gender-identity version of the “n-word.”

As always, however, the most disturbing part of the school guidelines is the fact that they give explicit advice on how to keep the identity of children secret from the parents. “The district has created a system for facilitating child sexual transitions for its K-5 students, telling children that they may choose a different name and set of pronouns than the ones they use at home, and that this new identity will be kept secret from their parents,” Rufo reported.

“The district’s policy is to facilitate child sexual transitions without notifying parents. ‘[Students] have the right to be ‘out’ at school, and to not have that information that they are ‘out’ – with new pronouns, with a new identity – in any way shared with those folks at home.’”

Additionally, parents are not permitted to shield their children from these lessons: “According to district policy, parents do not have the right to opt-out of the lessons on ‘gender identity’ and ‘sexual orientation,’ which are incorporated into the curriculum for English, social studies, arts, and other subjects. In middle school, San Francisco Unified begins promoting a program called ‘Q Groups,’ which is designed to ‘connect students to mental health professionals and clinics that offer gender-affirming health services,’ such as puberty blockers, hormone therapy, and gender surgery.”

“In sum,” Rufo concluded, “San Francisco Unified has created what Leor Sapir has called ‘a school-to-clinic pipeline,’ beginning in elementary school with secret child sexual transitions and concluding in middle and high school with referrals to ‘gender-affirming’ medical treatments.”

First indoctrination; then facilitation; cut the parents out. This is the industrial-scale institutionalization of the transgender agenda to children ages five and up, with parents kept intentionally unaware of what is happening.

We now know that many, many parents – I’ve spoken to some of them – find out that their children have learned from “educators” that they can select their gender; have been coached on the options available to them, and been given the terminology to use; and have finally been told how to “present” as the opposite sex or as gender-fluid. Name changes come next, with many children using one name at school and another at home, while school staff carefully protect the child from their parental home.

By the time the parents find out, their child has often entered another world and sometimes even begun hormone therapy without their knowledge.

Rufo’s reporting shines an essential light on this “school-to-sex-change pipeline,” and every parent should know what is going on. Don’t think it couldn’t be your family or your child. Too many have made that mistake already.