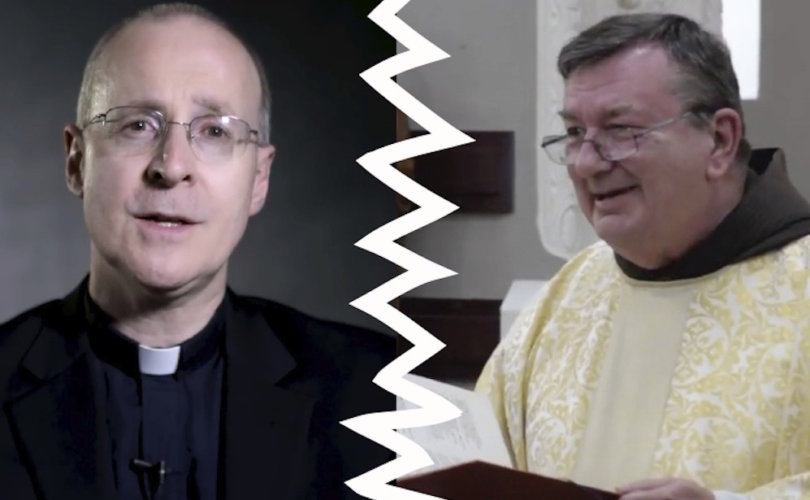 November 20, 2017 (LifeSiteNews) – The last Saturday in September proved to be a day of sharp contrasts: I spent the morning in Washington, D.C.’s historic Holy Trinity Church, listening to Fr. James Martin, SJ, speak about his pro-LGBT book, Building a Bridge. The evening was spent on the other side of town at venerable Capuchin College, where I was privileged to be at Mass and dinner with Fr. Thomas Weinandy, OFM, Cap., as he celebrated fifty years as a Capuchin.

It was the same Holy Catholic and Apostolic Church at both venues, although some observers might conclude Fr. Martin and Fr. Weinandy belong to two radically different churches.

The Church of Fr. Martin, and the Gospel of Affirmation

In all its various forms, liberation theology concerns itself with liberating the oppressed.

Fr. Martin subscribes to what might be called ‘gay liberation theology,’ through which he interprets scripture—and more broadly, all church teaching—in light of the LGBT experience.  He sees Catholicism through an LGBT prism and speaks in an LGBT tongue, presenting an LGBT-infused Gospel.

This is a Gospel foreign to most Catholic ears.  Even to many same-sex attracted Catholics like me, it is not only foreign; it rings untrue.  Yet crowds which gather to hear Fr. Martin greet him enthusiastically, lending him the status of a modern day Martin Luther King, Jr.  Those who choose to call themselves gay, lesbian, or transgender and Catholic—and often their loved ones—see Martin as leading a freedom march through a backward, prejudiced church, seeking to end LGBT discrimination.

The Jesuit has taken great license with Pope Francis’ statement, “Who am I to judge?” to the point of not only casting aside all judgement, but leaping beyond, justifying LGBT identity and activity as fully normal.  And sin is not sin.

Fr. Martin has his supporters and admirers among Catholic elites and the hierarchy of the Church.  Cardinal Joseph Tobin, Archbishop of Newark, says Fr. Martin’s message is “prophetic.”

In a recent University of Chicago townhall discussion, The Washington Post’s E.J. Dionne, said, “Jim Martin is a hero in a lot of the pews around the country for his rather inspirational writing.” Chicago’s Cardinal Cupich agreed, saying, “I’ve known Jim Martin for a long time … he really is … the foremost evangelizer in the Church today, especially for young people.”

But to what church—and what faith—is Fr. Martin evangelizing his young listeners? Do they experience conversion and repentance? Or do Fr. Martin’s words simply help them to feel better about themselves and their choices?

Of what is he a prophet? While Martin’s LGBT prism casts the full spectrum of rainbow colors, it deflects the brilliant light of the Gospel and its power to actually heal and change lives.

The Martin Gospel offers only affirmation, never once calling for self-examination; never questioning whether homosexual identity and activity are part of God’s plan for our lives. By omission or by default, sodomy shares the same moral value as conjugal sex.  In Martin’s abridged Bible, they are the same.

Fr. Martin’s ‘church’ perhaps represents the very best that the human intellect, operating on its own apart from God, can impart. Likewise, it offers the love of the human heart, wonderful on its own, but human affirmation is a far cry from the life-giving divine love that the Catholic Church has offered to all for two thousand years, leading to salvation and new life.

The Church of Fr. Weinandy, and the Gospel of Jesus Christ

Full disclosure: I have known Fr. Thomas Weinandy for nearly 40 years. Tom presided over our wedding in 1985. He baptized our children. He remained a faithful friend when I strayed from my marriage and my faith, divorcing myself from both my wife and the church in order to live as a gay man.

And then when, much like the Prodigal Son, I came to my senses and returned to my wife and sought to return to the Church, Tom was there to assist me and welcome me back. At all times, he never failed to speak the truth to me, always in love, even when I didn’t want to hear it.

As a preeminent Christologist, Fr. Weinandy has singlemindedly focused his entire adult life on one pursuit: knowing Jesus Christ.

Fr. Weinandy has amassed quite a resumé: At Pope Francis’ invitation, he was appointed to a five year term on the Vatican’s International Theological Commission; previously he was Executive Director of the Secretariat for Doctrine of the United States Catholic Conference of Bishops (USCCB); and before that he taught theology at the University of Oxford, where he was Warden (President) of Greyfriars College.

And although during his lifetime Fr. Weinandy has produced a solid collection of acclaimed scholarly theological and philosophical works, he is, at heart, a pastor and a brother.  He may work in the ivory towers of academia, but he does not dwell there.

At his fiftieth anniversary Mass last month, Fr. Weinandy expressed his deep love for Jesus Christ.  Not as an academic who loves his field of study, but as a man who loves the person of Jesus Christ, human and divine.

That Mass wasn’t simply about recognizing five decades of wearing a Franciscan Friar’s habit; it was about 50 years of loving and proclaiming Jesus Christ.  Fr. Weinandy is a theologian in the truest, fullest sense of the word. He said it outright before the small congregation gathered in Capuchin College’s chapel:  “I love Jesus.”

As he spoke that evening, I shared the experience of the disciples on the road to Emmaus. My heart burned within me as Tom explained the Scriptures about our Lord and Savior.

While a student at the University of Maryland in the mid-1970s, a group of us committed to evangelize one hour per day. Great idea, but I was frozen.  I would walk up to folks, but then walk right past them because I was too chicken to open my mouth.  During confession with Tom I mentioned that I was reneging on my commitment out of abject fear.  He said, “Douglas, stop taking yourself so seriously; just treat it like a lark.”  And of course, my penance was to “Do it.”  The next day I approached someone, took a deep breath, and opened my mouth.  To my amazement, words came out.  I soon found my heart set on fire to talk about Jesus with strangers daily.

In the early 1980s, Tom invited me to accompany him while visiting a former Capuchin, a young man, who had “come out” as gay, only to find himself dying of AIDS. Tom ministered and I testified about God’s love and having the grace to turn away from sin.

Because of that experience, I would later volunteer one night per week at Gift of Peace, the ministry Mother Teresa established in Washington, D.C., to care for indigent men dying of AIDS. Inspired by my experience with Tom, I dressed, fed, changed diapers, held hands, loved, kept company, prayed with and shared the Gospel as best I could.

There are many other stories to tell, and I am just one of many whose lives attest to Fr. Tom’s abundant, contagious love for Jesus Christ, and his Bride, the Church.

There is no mistaking it: The Church of Fr. Weinandy, like the early church, is built on rock, not shifting sands. And that rock is Jesus Christ.

The Splendor of Truth Delineates the Two

Archbishop Chaput, writing recently on the occasion of the 25th Anniversary of St. Pope John Paul’s Veritas Splendor, said, “When John Paul issued Veritatis Splendor nearly a quarter century ago, it very soon drew criticism from a range of ‘forward-thinking’ theologians. They (rightly) saw that their efforts—to bend Catholic moral teachings toward more ‘humane’ and ‘compassionate’ standards, whereby moral truths could evolve over time, relative to historical and cultural circumstances—would be derailed by it.”

He continued, “To a great extent, today’s debates within the Church—on issues of sexual identity, sexual behavior, Communion for the divorced and civilly remarried, the nature of the family— simply exhume and reanimate the convenient ambiguities and exible approaches to truth that Veritatis Splendor forcefully buried.”

Fr. Martin and Fr. Weinandy are both priests of the One Holy Catholic and Apostolic Church: One priest loves and clings to the whole truth, including what Cardinal Sarah refers to as the Gospel’s “hard sayings.” The other seeks to evade those sayings.

Archbishop Chaput, concluding his comments, said, “But the splendor of the truth cannot be hidden. It is ever ancient, ever new. In the long run, Veritatis Splendor will be remembered long after many other works of popes and politicians are forgotten.”

“It will be remembered for one simple reason: What it says is true.”