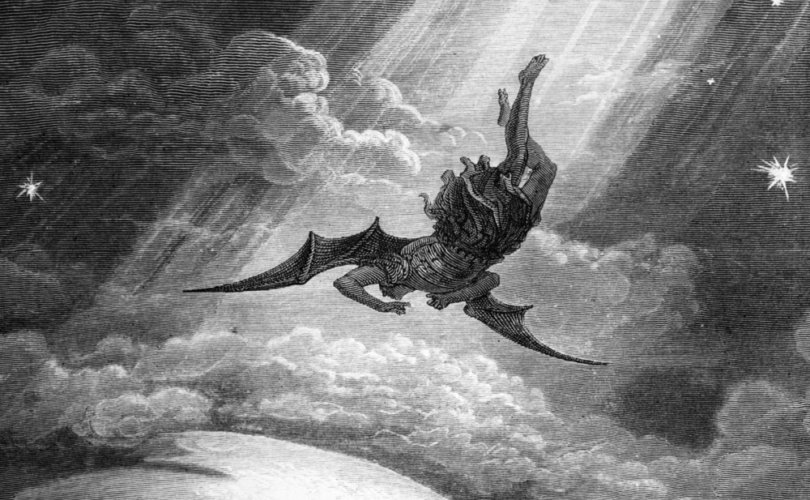 August 12, 2020 (LifeSiteNews) — For some time now, the Satanic Temple — headquartered in Salem, Massachusetts due to the witch trial connection — has been campaigning for abortion. Back in June, I wrote in this space that “Lucien Greaves, their creepy-looking leader, has turned his organization into a military vehicle of the culture war,” and he responded on Twitter to the effect that he was pleased with this characterization. The Satanic Temple has been attempting to utilize religious liberty laws in its favor, demanding equal access to schools for Satanism and claiming that restricting abortion violates its members’ religious freedom.

The Satanic Temple is now upping its game, launching a campaign titled “Satanic Abortions Are Protected by Religious Liberty Laws.” Abortion, their website states, is a Satanic religious practice:

To promote the campaign, the Temple has launched a raffle to raise $100,000 for abortion “rights,” with first prize being a free abortion. (Second place is a Zoom meet-and-greet with Satanic Temple co-founder Lucien Greaves; last-place prizes consist of various swag with the slogan “Thyself Is Thy Master.”)

The Satanic Temple is going even farther in its campaign for unrestricted abortion by officially declaring abortion a formal “Satanic Abortion Ritual”:

The Satanic abortion ritual provides spiritual comfort and affirms bodily autonomy, self-worth, and freedom from coercive forces with the affirmation of TST’s Seven Tenets. The ritual is not intended to convince a person to have an abortion. Instead, it sanctifies the abortion process by instilling confidence and protecting bodily rights when undergoing the safe and scientific procedure.

Laws that violate the Satanic right to kill one’s offspring in the womb include mandatory waiting periods, counseling prior to abortion, compulsory burial of fetal remains, required reading materials, listening to the baby’s heartbeat, and any other practice designed to dissuade a woman or otherwise remind her of her baby’s life and humanity. All of this is to conform to what they refer to as their “Personal Affirmation” mantra: “By my body, my blood, By my will it is done.” No mention is made of the blood of the child, which is what is being shed during an abortion.

The Satanic Temple even provides specific mantras to chant or repeat during each type of abortion. Here, for example, is the suggestion for medical abortions:

Immediately before taking the medication(s) to terminate your pregnancy, look at your reflection to be reminded of your personhood and responsibility to yourself. Focus on your intent, take deep breaths, and make yourself comfortable. When ready, read the Third Tenet aloud to begin the ritual. After swallowing the medication(s), take another deep breath and recite the Fifth Tenet. After you have passed the embryo, return to your reflection, and recite the personal affirmation. Feel doubts dissipating and your confidence growing as you have just undertaken a decision that affirms your autonomy and free will. The religious abortion ritual is now complete.

Satanists claim they do not literally believe in the existence of Satan, but rather admire him as “a symbol of the Eternal Rebel in opposition to arbitrary authority, forever defending personal sovereignty even in the face of insurmountable odds.” In short, if they thought he did exist, they’d be fans. In the meantime, they appear to have an uncanny sense of what practices he approves of and throw themselves into supporting those practices with everything at their disposal.

Their claims that they support “scientific evidence” is ridiculous. Presumably, Temple attendees have not as of yet had the privilege of viewing National Geographic’s In the Womb.