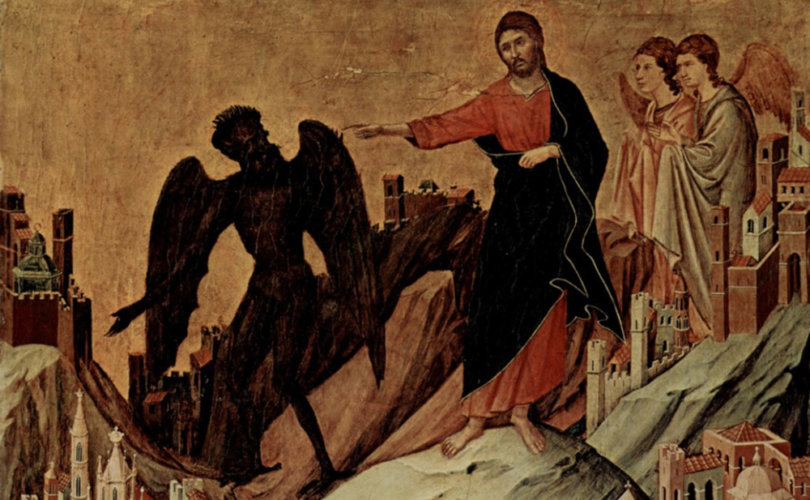 February 20, 2017 (LifeSiteNews) — In the light of current events in the world and in the Catholic Church, it seems important to resurrect an especially thought-provoking 2007 article by LifeSite's John-Henry Westen re-published below. That article was widely quoted at the time and for good reason as you will see.

In 2007, the climate change hysteria and general collapse of moral consensus was not as present in governments, educational institutions, and society, and now at the highest level in the Catholic Church, as it has been the past few years.

Pope Francis has also been inviting increasingly virulent, prominent New World Order enemies of Christianity, such as Paul Ehrlich, Professor John Bongaarts,the vice-president of the Population Council, and China's “organ czar,” to speak at Vatican conferences and advise the Church on policies.

Now, Francis has even just praised and worked together on a February conference in California with the George Soros-funded organization, PICO — People Improving Communities through Organizing.

OnePeterFive reports, “Leftist watchdog website Discover the Political Networks describes PICO as a group that 'uses Alinsky-style organizing tactics to advance the doctrines of the religious left.'' In an Aug. 23, 2016 article, LifeSite's Westen reported that Soros paid out $650,000 to PICO and another organization to “influence Pope Francis’ September 2015 visit to the USA with a view to 'shift[ing] national paradigms and priorities in the run-up to the 2016 presidential campaign.'”

And so, Westen's 2007 article, given the astounding developments that have taken place since its original publication, is now read in a dramatically different light than when it was first published. Back then – not so long ago – few of us would have believed that much of what has happened since 2007 could actually happen. We just could not have imagined that things could go so far awry in so  little time.

Readers should always keep in mind that prayer and personal sacrifices offered to God have great power to change the course of history, even when that course appears to be unstoppable. The phrase “Be not afraid,” or versions of it, appear 365 times in the New Testament. Living that is one necessary mark of a true Christian, although temporary lapses are just being human.

Before the article, I include two relevant quotes – one quote from John Paul II and the other from Pope Benedict:

“We are now standing in the face of the greatest historical confrontation humanity has ever experienced. I do not think that the wide circle of the American Society, or the whole wide circle of the Christian Community realize this fully. We are now facing the final confrontation between the Church and the anti-church, between the gospel and the anti-gospel, between Christ and the Antichrist.”

Also, in 2010 Pope Benedict stated the following in his Christmas message to the Vatican Curia:

“[O]ur world is at the same time troubled by the sense that moral consensus is collapsing, consensus without which juridical and political structures cannot function. Consequently the forces mobilized for the defence of such structures seem doomed to failure….

“Alexis de Tocqueville, in his day, observed that democracy in America had become possible and had worked because there existed a fundamental moral consensus which, transcending individual denominations, united everyone. Only if there is such a consensus on the essentials can constitutions and law function. This fundamental consensus derived from the Christian heritage is at risk wherever its place, the place of moral reasoning, is taken by the purely instrumental rationality of which I spoke earlier. In reality, this makes reason blind to what is essential. To resist this eclipse of reason and to preserve its capacity for seeing the essential, for seeing God and man, for seeing what is good and what is true, is the common interest that must unite all people of good will. The very future of the world is at stake.”

Pope’s retreat preacher speaks on Antichrist as a 'pacifist, ecologist and ecumenist'

VATICAN CITY, March 1, 2007 (LifeSiteNews) – Papal watchers are wondering what message Pope Benedict XVI was giving when he selected retired Bologna archbishop Cardinal Giacomo Biffi to preach the annual Lenten retreat to the Pope and the top members of the Vatican.

Rocco Palmo, expert Vatican reporter for The Tablet, the international Catholic weekly published in London England has noted the significance of the selection of the Lenten retreat preacher.  “Since time immemorial—or, at least, the retreat’s heightened profile over the 20th century—the selection of the preacher has become a closely-watched indicator of the prevailing winds in the papal apartment,” said Palmo on his blog.  “(T)he choice often falling to a voice the Pope might like to tout… and not just for a higher prominence on the preaching circuit.”

Palmo added weight to his remarks noting that “Before their respective elections to the papacy, both Joseph Ratzinger and Karol Wojtyla were tapped to lead the annual exercises.”

This year’s selection when it became known created a stir since Cardinal Biffi, while he is known for orthodox faith and frank words, is most well known, at least in the secular media, for his preaching on the Antichrist.  In fact, the Times of London reported in 2004 that the Cardinal described the Antichrist as “walking among us”.

The Lenten retreat did not disappoint.  Cardinal Biffi picked up on his oft repeated theme of the Antichrist, basing his remarks on the works of Vladimir Soloviev, a Russian religious philosopher who has received praise from Pope Benedict prior to his elevation to the pontificate.

Quoting Soloviev, the Cardinal said “the Antichrist presents himself as pacifist, ecologist and ecumenist.”

“He will convoke an ecumenical council and will seek the consensus of all the Christian confessions, granting something to each one. The masses will follow him, with the exception of small groups of Catholics, Orthodox and Protestants,” he said according to a Zenit translation of a Vatican Radio summary here: https://www.radiovaticana.org/it1/Articolo.asp?c=120479 . (Feb. 20, 2017 – Translation is no longer available on Zenit and the only Zenit report on the 2007 retreat mentions only the first day's talk and not the later one on the Antichrist)

In his “Tale of the Antichrist” Solovyov foresees that a small group of Catholics, Orthodox and Protestants will resist and will say to the Antichrist: “You give us everything, except what interests us, Jesus Christ”.   For Cardinal Biffi, this narrative is a warning: “Today, in fact, we run the risk of having a Christianity which puts aside Jesus with his cross and resurrection.”

The 78-year-old cardinal added that if Christians “limited themselves to speaking of shared values they would be more accepted on television programs and in social groups. But in this way, they will have renounced Jesus, the overwhelming reality of the resurrection.”

The cardinal said he believes that this is “the danger that Christians face in our days … the Son of God cannot be reduced to a series of good projects sanctioned by the prevailing worldly mentality.”

The preacher of the Spiritual Exercises added that “there are relative values, such as solidarity, love of peace and respect for nature. If these become absolute, uprooting or even opposing the proclamation of the event of salvation, then these values become an instigation to idolatry and obstacles on the way of salvation.”

Cardinal Biffi affirmed that “if Christianity—on opening itself to the world and dialoguing with all—dilutes the salvific event, it closes itself to a personal relationship with Jesus and places itself on the side of the Antichrist.”

Cardinal Biffi’s reflections, in fact, are very similar to remarks Pope Benedict made last Fall in a meeting with Swiss Bishops.  While Pope Benedict did not speak of the Antichrist, he spoke of a new false or “substitute” religion, calling it also a “successor” of religion.

“Modern society is not simply without morality, but it has, so to speak, ‘discovered’ and professes a part of morality”, the Pope told the Swiss bishops. “These are the great themes of peace, non-violence, justice for all, concern for the poor, and respect for creation.”

However, the Pope warned that these “great moral themes” have “become an ethical complex that, precisely as a political force, has great power and constitutes for many the substitute for religion, or its successor.”

If Pope Francis were right on adultery, the Catholic Church would collapse

Why is the Church entering the fray on ‘climate change’? And with such overblown rhetoric?