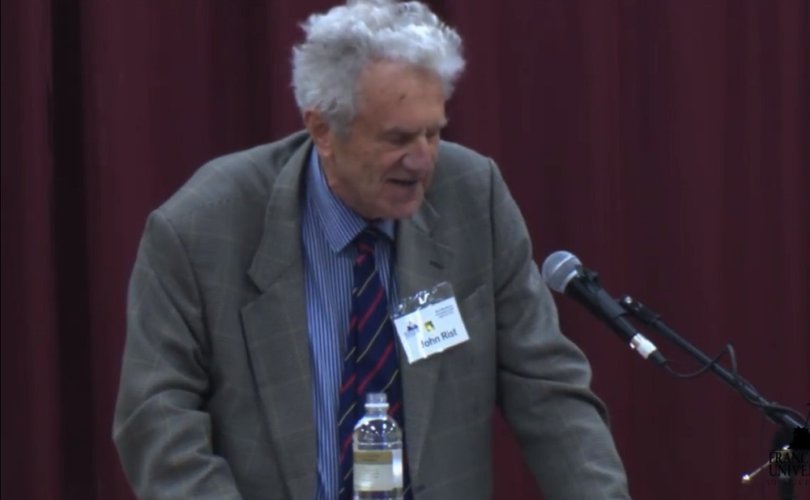 May 31, 2019 (LifeSiteNews) — Several Catholic scholars have raised their voices against pontifical universities’ ban on Professor John Rist in the wake of him signing an open letter accusing Pope Francis of heresy.

As LifeSiteNews has reported, Professor John Rist, an 83-year-old distinguished scholar of classical philosophy, has been banned from any access to the pontifical universities, and this without any prior notice or conversation. When he arrived on May 25 at the Augustinianum in Rome, he was told he could not park his car there anymore and that he has been banned. Rist has not even been formally informed as to why he has been banned, though he suspects that it is due to his signing the open letter to bishops. The scholar also was told that he was not to continue to help one student with his doctoral dissertation.

Professor Rist called his being treated in this manner a “less than Christian response.”

Father Joseph Fessio, S.J., founder and former editor-in-chief of Ignatius Press, told LifeSiteNews that “if this report is true — and I haven’t verified it — it is an outrage, and a very ironic one at that.”

He pointed out that there are many at Catholic universities who dissent in “authoritative” matters and are never disciplined. Such dissent is so widespread, he said, that it is the “new normal.”

“Pope Emeritus Benedict correctly located the root of the sexual abuse crisis in the sexual revolution of the 1960s and 1970s and the subsequent collapse of moral theology in seminaries and universities. But, apart from Charles Curran, I don’t recall any professors being banned from Catholic universities for their dissent from Humanae Vitae. In fact that dissent is the ‘new normal’ to this day.”

Fessio noted that in Rist’s case, the professor “did not deny or reject any Catholic teaching.”

“He can be criticized — and has been — for signing the document,” he said, “but what happened to academic freedom?”

In his conclusion, Father Fessio summed up the situation in the Church as follows: “The present situation is: a professor in a Catholic institution has freedom to reject authoritative Catholic teaching, but not to criticize the pope. Chesterton would call that topsy-turvydom. I would call it something worse.”

Dr. Edward Feser, a Catholic author and philosopher who teaches at Pasadena City College in California, commented on his own blog on the recent news about Professor Rist. Feser says that, while he himself has been “critical” of the Open Letter itself, “this strikes me as undeservedly shabby treatment.”

Feser then comes to the defense of the honor of Professor Rist, saying that “whatever one thinks of his views,” he is “not some hotheaded pamphleteer or hack blogger.”

“He is a serious thinker, an eminent scholar of classical and early Christian philosophy, the author of many important books, a longtime professor at the Catholic University of America, and a loyal and orthodox son of the Church.”

Dr. Feser, similar to Father Fessio, puts the treatment of Rist in the context of the fact that “Vatican officials persistently refuse to address the actual substance of the arguments of critics — and indeed, refuse even just to answer straightforward questions like the dubia.” At the same time, however, “heterodox Catholic academics and public intellectuals are largely allowed free rein,” and thus “this sort of action seems extremely petty, to say the very least.”

“Even dissidents like Hans Küng and Charles Curran, who were disciplined by the Church under Pope St. John Paul II, were first given due process and the opportunity to defend themselves,” he added.

Not being sure whether or not Pope Francis is aware of this harsh treatment of Professor Rist, Dr. Feser hopes that “should he [the pope] learn of it, he will urge the relevant officials to show to Prof. Rist the mercy that the pope has so heavily emphasized during his pontificate.”

LifeSiteNews reached out already yesterday to the Vatican Press Office, informing Pope Francis about the story and asking him whether he wished to intervene in the Rist case for the sake of mercy. There has been no reply so far.

Matthew Schmitz, editor of First Things and a contributor to the Catholic Herald, took to Twitter to comment on this piece of news. While posting the LifeSiteNews report on Professor Rist, the journalist stated: “Now we have news that men who have given long service to the Church, accused of no heresy, are being subjected to informal sanctions, without any opportunity to mount a defense or recant.”

He added that he does not agree with the letter on heresy signed by Prof. Rist “because it draws conclusions that don’t quite follow.” “But I deplore the underhanded and selective treatment he is receiving, when many, many Catholic theologians flirt with heresy.”