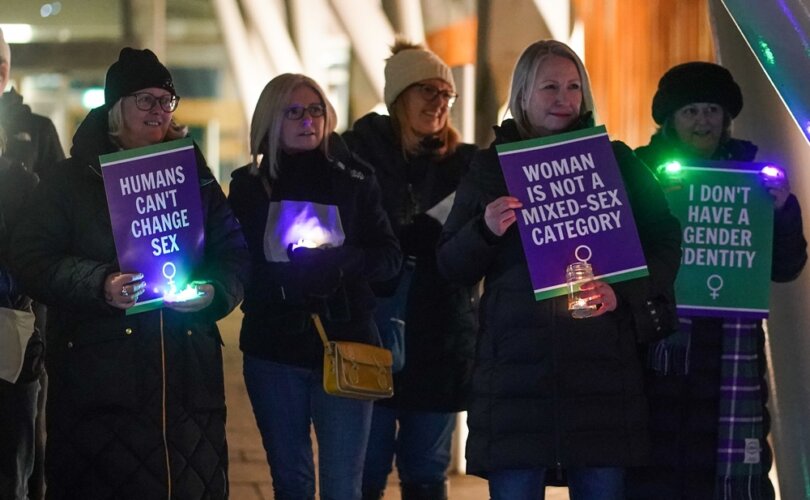 (LifeSiteNews) – On December 22, the Scottish National Party (SNP) passed First Minister Nicola Sturgeon’s Gender Recognition Reform Bill despite opposition from the majority of Scottish voters – and from Westminster. Sturgeon ignored her critics and the women-led protests who called her bill one of the greatest legal assaults on women’s rights in decades, and the law passed 86 to 39. Cries of “shame on you!” erupted as the bill passed – a radical piece of social engineering designed to transform Scottish society in a single fell swoop. Protests became so rowdy that the Scottish parliament had to be suspended after demonstrators in the gallery made their displeasure known.

“No one is listening to women!” one shouted – and that summed up the feelings of the protestors. The fierce debates on Tuesday and Wednesday went longer than any in the history of Scottish Parliament.

But the actions of Sturgeon and the SNP – with the support of the Labour Party and the Lib Dems –suggests something more sinister than simply not listening. The Gender Recognition Reform Bill not only enshrines self-identification into law and entirely removes the need for a formal diagnosis of gender dysphoria for anyone 16 or older, creating a legal regime where anyone can identify as whatever they want, whenever they want. Activists have also pointed out that violent criminals will opt to identify as female under this new regime – and indeed, this has already begun to happen across the U.K.

— Article continues below Petition —
Stand with Josh Alexander against school that allows boys to use girls' bathrooms
Show Petition Text
5604 have signed the petition.
Let's get to 6000!
Thank you for signing this petition!
Add your signature:
Show Petition Text

Critics – including famed author J.K. Rowling – have noted that violent male sex offenders could “transition” simply by declaring themselves female (with a little help from Ms. Sturgeon!) and then force their victims to use female pronouns in court and elsewhere. To address this, a clause to the law was put forward to block those on the sex offenders’ register from obtaining a gender recognition certificate –and it failed by a single vote on the evening of December 21. As Tory leader Douglas Ross noted: “The government stopped that amendment by a single vote. The First Minister’s own vote means a man standing trial for rape can claim they’re a woman and force a victim to call them ‘she.’ Why did the First Minister vote for this?”

To reiterate: First Minister Nicola Sturgeon voted against keeping violent sexual criminals from being able to identify as women whenever they want. Her utter contempt for those who have been victimized and have suffered sexual abuse is monumental, and it is on the record. As Scottish Conservative equalities spokeswoman Rachael Hamilton said: “We all support improving the experience for trans people, but that should never come at the expense of the safety of women and girls, and their hard-won rights. But Nicola Sturgeon’s Bill – in the form that it has been passed – does put their safety at risk.”

In response, Sturgeon insisted that the bill would have “little impact outside the trans community.” She did not explain why she insisted on voting to ensure that sex offenders could identify however they chose, or why she rejected the concerns of those fueling the protests on the streets of Edinburgh.

Nationalist MSP Michelle Thomson, who has previously gone public with her own experience of rape as a teenager, was ignored in calling for the amendment, and had asked for a GRC application to be delayed if the applicant was charged with sexual assault. “Do members in the chamber understand how that could represent an opportunity for abusers to exert power and control over their victims?” she asked.  Considering the detailed testimony that was presented to the MSPs, the only possible answer is that they do understand – and that they, and Sturgeon in particular, simply do not care. Trans rights trump women’s rights.

The bill will now head to the Senate, where it will become law unless it is blocked by the U.K. Scottish Secretary Alister Jack may legally challenge the law, which takes a very different approach to the transgender question than the rest of the U.K. Private groups can also sue and are likely to do so. U.K. equalities minister Kemi Badenoch has already noted that many have concerns about the impact of the law across the U.K., and Jack stated that the U.K. government may consider taking action at the Supreme Court, noting that: “We share the concerns that many people have regarding certain aspects of this Bill, and in particular the safety issues for women and children. We will look closely at that, and also the ramifications for the 2010 Equality Act and other UK-wide legislation, in the coming weeks—up to and including a Section 35 order stopping the Bill going for Royal Assent if necessary.”

If the bill is blocked, it may fall to Westminster to do so. MP Joanna Cherry, who has publicly condemned the law, stated that SNP politicians in both Holyrood and Westminster were simply too “scared to speak out” and were clearly too cowed by Sturgeon to stand up and demand “minimal safeguards,” which she noted “raises problems for the safety, dignity and privacy of women.” Dr. Aileen McHarg, professor of public law and human rights at Durham University, also told the BBC that she expects a legal challenge to come from women’s rights groups. The U.K. government will also likely demand changes, as gender self-ID has implications for passports and other government licenses.

A great shame was perpetrated by Nicola Sturgeon, the Scottish Nationalists, and their cowardly allies in the Labour Party and Lib Dems this week. Women spoke out – and hundreds took to the streets. They asked for dignity, and safety, and protection for spaces dedicated to the victimized and the vulnerable. In response, Sturgeon and her allies in the LGBT movement spat in their faces, gaslit them, and told them their concerns were silly and that the evidence they presented was not good enough. Worse, they voted against an anemic amendment that would have simply prevented sex offenders currently facing charges from identifying as female to protect victims of sexual assault, clearly exposing their contempt. Sturgeon and her cronies have gotten their way, and unless this law is stopped, vulnerable women will pay the price.