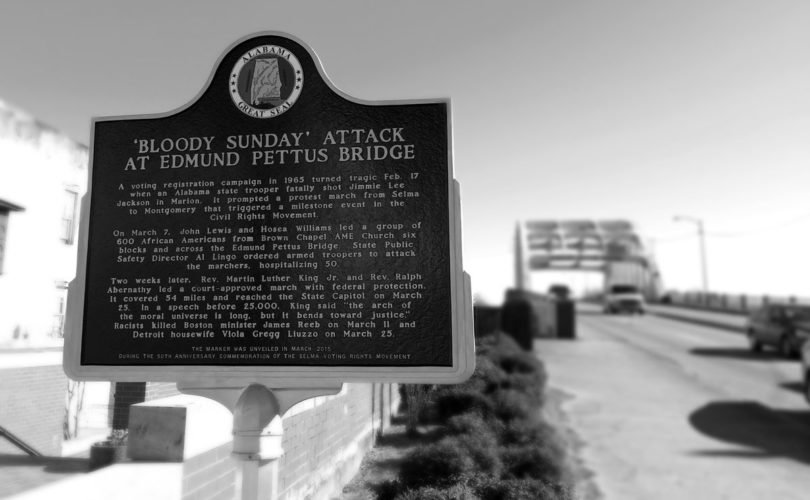 March 7, 2016 (LifeSiteNews) — It was a powerfully quiet moment for me as I stood, alone, on the Edmund Pettus Bridge. The struggle for human dignity and the depravity that tried to suppress it happened right beneath my feet.

It was hard to hold back my tears.

As someone who is half white and half black, my heart is for racial reconciliation. We’re all part of one human race, yet are inclined to finding all kinds of ways to separate ourselves…to dehumanize ourselves.

In Plessy v. Ferguson, the Supreme Court ruled, despite numerous Reconstruction Amendments, that black people were not human therefore not afforded the full protections of the Constitution. ‘Separate But Equal’ was a national doctrine, birthed in eugenics, that promised nothing but inequality. Voting Rights, despite being enshrined in the 15th and 19th Amendments, were not protected.

Don’t let anyone fool you that the South was the only region guilty of codified racism. Democrats enacted racist Jim Crow laws throughout the majority of the states. Northern cities saw their share of racist demonstrations, riots and KKK activity. The terrorist wing of the Democrat party did everything it could do to spread fear. They lynched blacks and whites to impose their violent campaign of voter intimidation. Poll taxes and literacy tests were enacted to prevent what the Constitution guaranteed.

But 1965 marked a tragic yet triumphant moment in American history.

On February 17, civil rights activist Jimmie Lee Jackson was killed for peacefully demonstrating for the right to vote. He was shot and mortally wounded by Alabama state trooper James Bonard Fowler. He died, days later, at nearby (and now shuttered) Good Samaritan Hospital. It took 40 years for Fowler to be indicted for Jackson’s murder. His death, however, set off a course of events that would change the nation. Courageous self-sacrifice has a way of doing that.

The infamous “Bloody Sunday” March that followed on March 7th, with 600 non-violent activists led by (now) Representative John Lewis and minister Hosea Williams (of the Southern Christians Student Leadership Conference), would meet state resistance like the country had never seen televised before. The intended march from Selma to the capitol in Montgomery was halted by a horrifically violent attack by police officers, state troopers and “deputized” thugs under the order of “segregation now, segregation tomorrow, segregation forever” Democrat governor, George Wallace. Marchers were viciously attacked and gassed; 50 were hospitalized. John Lewis was severely beaten. And the nation watched the brutality broadcast in uncensored form. Two people involved in the march—Boston minister James Reeb and a housewife from Detroit, Viola Gregg Liuzzo—were killed by cowardly racists offended by the courage of these two white freedom fighters.

It’s amazing what happens when mainstream media allows the truth about the dehumanization of a group of human beings to be communicated for all to see.

Martin Luther King Jr. and other national leaders got involved. On March 21, 1965—with a southern judge’s ruling in favor of the First Amendment—the march from Selma to Montgomery was approved (as if ‘free speech’ and ‘redress of grievances against the government’ should ever need to be approved). President Lyndon B. Johnson, who had previously voted against every effort to eliminate segregation laws including poll taxes and literacy tests, apparently realized the Democrat party needed to catch up with the Party of Lincoln in regards to equality. At the urging of MLK, Johnson federalized the Alabama National Guard to protect the peaceful marchers, black and white, which enabled these indefatigable champions to make it—unharmed—to Montgomery.

I was honored to be on that bridge which serves as a monument to the relentless human spirit. Within a few moments, an elderly couple with my brown complexion, walked toward me. I imagined them witnessing or even participating in those historic events back in ‘65. I smiled as they walked by thanking them silently for enduring what I would never have to.

How could any human being treat another with such barbarity? We often think of ourselves as more enlightened than previous generations, but human history is a linear record of vicious circular behavior, repeated with equal callousness.

The Voting Rights Act of 1965 was passed in August of that year (passed, by the way, with a larger margin of Republicans than Democrats, 94% versus 69% respectively). The Civil Rights Act of 1968 (aka Fair Housing Act) was passed to continue fulfilling the promises of equality in the Constitution. Both invoked the 14th Amendment. Then, seven Supremely wrong justices abused that very amendment to rule that another group of human beings was not human, therefore not protected by the Constitution. Those unjust rulings were Roe v. Wade and Doe v. Bolton—allowing the commercialized killing of human beings throughout the entire pregnancy, including partial birth abortion. We’re still not equal. What tragic irony that Congressman John Lewis (D-GA), beaten because he wasn’t considered human, is one of the most radical supporters of the violence of abortion; he even voted against the Partial Birth Abortion Ban Act in 2003.

I was born as a result of the horrific, yet redeemable, act of rape. My life was spared from abortion by a courageous birthmom who enabled me to be adopted and loved. Those acts of justice made it possible for me to stand on that bridge as an adoptee and adoptive father who passionately defends human dignity.

I was in Selma to speak at a banquet for Safe Harbor Women’s Medical Clinic, a pregnancy care center that values the intrinsic worth in mother, father and child (born and unborn). The large racially diverse audience was a testament to how much things have changed in the city immortalized in books and film. They all understood what I felt earlier that morning on that historical site. Black and white Americans didn’t risk their very lives to march for equality across that bridge only to have millions march into abortion mills and have equality ripped away by violent injustice. And as we all know, that violence is not being televised.