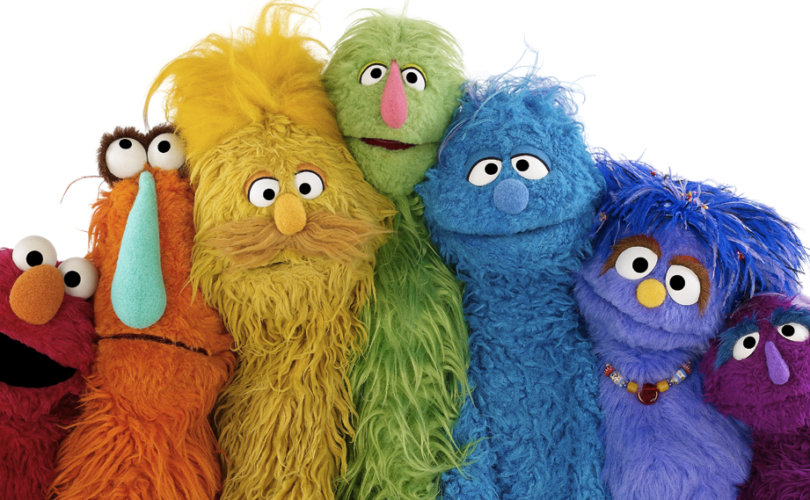 The show’s official Twitter account displays an image of Sesame Street’s biggest celebrity character, Elmo, next to his multi-colored Muppet friends – a clear tribute to the “Gay Pride” rainbow flag.

In a kind of one-two punch, the combined illustration and message abandon any notion of childhood innocence while simultaneously promoting the politicization and sexualization of kids.

Do preschoolers really need to have the words gay, lesbian and transgender and the types of ‘families’ they might form injected into their vocabulary and psyches at such a tender age? Do they also need to take sides in a political war in which they have no chance of understanding until they are much, much older?

“We are creating a generation of super-sexualized children,” said Fred Kaeser, the health director for the New York City Department of Education in his Psychology Today blog. “A significant number of children are actually demonstrating sexual interest and/or sexual behavior at earlier ages than ever before in our society. Kids are being exposed to sexual matters that were previously only in the purview of adults and the greater the exposure the greater the consequences can be.”

As a political matter, Sesame Street is no longer neutral in the LGBT culture wars. This tweet reveals that Sesame Street is overtly pro-gay, declaring its solidarity with organizations like the Human Rights Campaign (HRC). At the same time, the children’s show is clearly untethering itself from whatever connection it might have enjoyed with the world of orthodox Christianity.

Sesame Street is part of a larger trend

Sesame Street is not the only child-oriented business to use “Gay Pride” month as a marketing opportunity.

Lego, Mattel, and Hasbro have begun approaching the creation and marketing of their toys to appeal to both genders, according to Fortune Magazine. And likewise the companies have stopped dividing toy space into pink and blue aisles and ceased using boys or girls categories in reporting revenues.

The report said industry executives call it a sign of the times, with millennial parents in particular wanting to avoid having their children learn “stereotypical” gender behaviors.

As it turns out, Ken was anatomically correct all along

Last week, Mattel unveiled 15 new Ken dolls for the Barbie and Ken franchise, including several versions of a “Man-Bun Ken” as well as “Fashionista” Ken.

Sexually ambiguous “Ken” is going against the pop-culture tide as he moves away from what was formerly his prefered “gender identity” – a male – to an identity that conforms to his nonexistent doll genitalia.

Muppets don’t exist from the waist down

It used to be that the Muppets were sexually non-ideological because, let’s face it, Muppets don’t exist from the waist down. They were nothing more than child-friendly characters.

But in the current climate where what exists below the waist is no longer indicative of sexual identity, where sexual identity can be a figment of one’s imagination having nothing to do with either nature or natural law, Sesame Street is able to emerge as a natural promoter for LGBT ideology.

The seven sets of eyes belonging to those cute, cuddly, vibrant rainbow-colored characters in the Sesame Street tweet weren’t staring at you; they are looking straight into your children’s and grandchildren’s eyes.

At the time of this writing, the Sesame Street “Pride” tweet has garnered more than 175,000 retweets and likes.