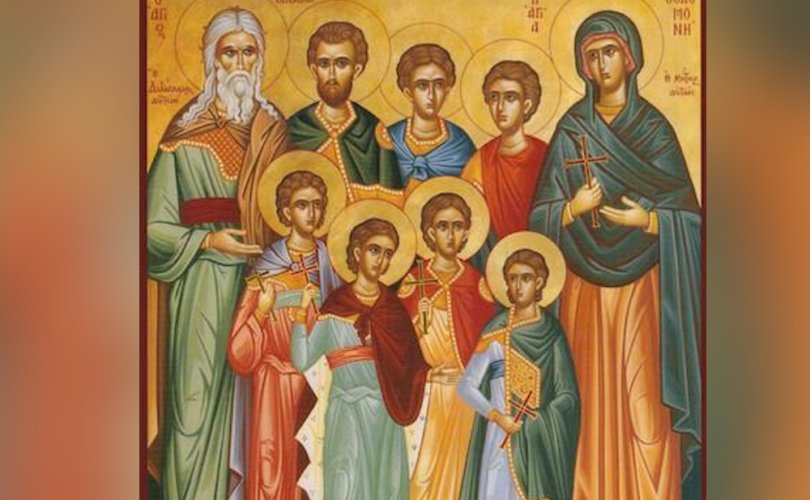 August 1, 2018 (LifeSiteNews) – Today on the traditional calendar of the Roman Rite as well as in the calendar of Eastern Catholics and Eastern Orthodox is the feast of the Seven Holy Maccabees, the brothers who died under horrible torture rather than break the law of the Lord in the slightest way. And what was the law for which they died? Something major, like: “Thou shalt not kill,” or “Thou shalt not steal,” or “Thou shalt not commit adultery”?

No—that they should not consume pork, which was forbidden by the law of Moses.

This very small detail of the law, one that was destined to pass away with the coming of Christ, was nevertheless commanded by God as something that His people were to follow unwaveringly. Yes, there were reasons for it. For example, the Jews were taught to slaughter animals that the Egyptians worshiped as divine, and to avoid animals that were dirty and herded by Gentiles.

Yet whether or not we fully understand the reasons behind a prohibition, what matters is obeying God’s will, as He makes it known to us. In fact, St. Thomas argues that the restriction on the Tree of the Knowledge of Good and Evil, the very first commandment ever given, was arbitrary in the strict meaning of the word—that is, there was nothing wrong with the tree, and yet its fruit was forbidden in order to establish clearly that God is the Creator and that He is the measure of what is right and wrong for His creatures. It was a pedagogy in trust: “If you accept this limitation, I will bless you for it, and in due time, I will give you more than that which I withheld.” By obeying, they would signify their subordination to Him, their trust in His superior wisdom, and their willingness to be led rather than to take affairs into their own hands and pretend to be gods, autonomous from law.

As we know, Adam and Eve did not prove obedient. Nor, tragically, did the people of Israel, to whom the Lord had shown so many and such great acts of deliverance and mercy, above all in giving them a law more comprehensive, more just, and more rational than that of any other nation. And this brings us to the reason why the seven Jewish Machabean brothers, to whom tradition gives the names Abim, Antonius, Gurias, Eleazar, Eusebonus, Alimus, and Marcellus, have been universally venerated by Christians for many centuries. They are, in fact, the only Old Testament saints to be found in the Mass of the Roman Rite (at least, until the reforms of the late 1960s that removed so many saints—but fortunately with the return of the Extraordinary Form, the Machabees have returned as well).

This band of brothers is venerated because in them we see the obedience, the trust, the faithfulness to God’s word and will and law, that Adam and Eve failed to show. We see the willingness to suffer and die even for a small matter, if it is known to be God’s will, rather than the practical atheism that cares nothing for God’s will and scorns Him in matters great and small. We see a model of the total dedication of the disciple to the master, the son to the father, the creature to the Creator. In short, we see a pattern for our own attitude when it comes to the commandments of God, over which nothing may be allowed to prevail.

The story of the seven martyrs for the Law is told in the seventh chapter of 2 Machabees (or Maccabees). The eldest of the brothers says to the king: “What wouldst thou ask, or learn of us? We are ready to die rather than to transgress the laws of God, received from our fathers.” The youngest of them in like manner says to the king, after having watched all his brothers be killed: “For whom do you wait? I will not obey the commandment of the king, but the commandment of the law, which was given us by Moses. … For my brethren, having now undergone a short pain, are under the covenant of eternal life: but thou by the judgment of God shalt receive just punishment for thy pride.” The narrative then observes: “So this man also died undefiled, wholly trusting in the Lord.”

Today, should we not be shocked and appalled that there are people in the Catholic Church who are arguing that not even the Ten Commandments should be kept inviolable by Christians? Or who do not believe that we should be prepared to suffer any torment and even give up our lives rather than act against these Commandments?

One cannot help seeing a link—perhaps a very broad one, but a real one nonetheless—between the abolition of such an ancient feast as that of the Machabees; the trend to avoid the Commandments as a basis for preparing for sacramental Confession; the sharp opposition made between, on the one hand, love and mercy, and, on the other hand, obedience and law; and the moral and doctrinal corruption that has set into the hierarchy of the Church. The cure for our ills will involve the fundamental cure of all human sin, namely, humble repentance for deviating from God’s holy will expressed in His commandments, and a zealous effort to do His will, no matter what sufferings it may cost us. For this, in the end, is how we show our love: “If ye love me, keep my commandments” (Jn 14:15).