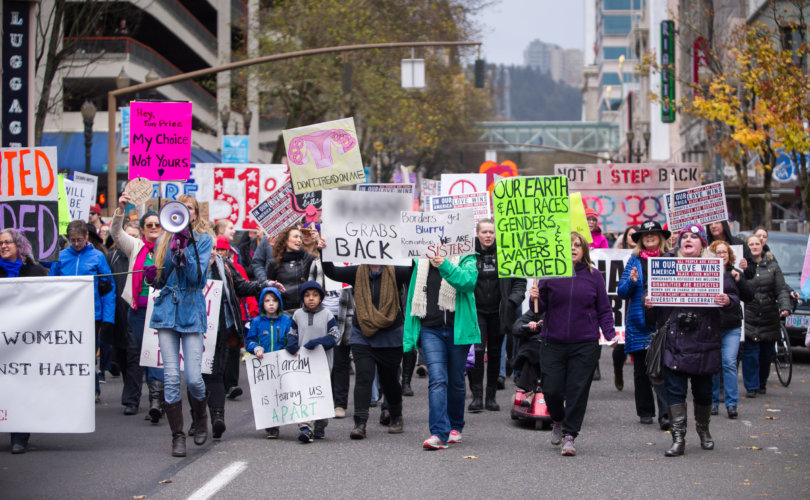 Anti-Trump protestors at the Women's March on Washington

June 29, 2017 (LifeSiteNews) — I was asked recently why, in spite of the fact that I’m more of a traditionalist than a conservative, I spend so much time detailing the dangers of progressivism in my writing. As I considered the answer to that question, I realized that I’d have to write a book to give an even remotely adequate response. In lieu of a project of that size (at least for now), I’d like to offer seven reasons that I believe progressivism is well on its way to destroying Western Civilization — if it has not already.

They don’t believe in freedom of speech.

This should be obvious to anyone who reads the news. When progressives are faced with speech they don’t like, they utilize every tool at their disposal to shut it down, up to and including violence — and usually while simultaneously playing the victim card. Conservative speakers on campus generally need a cadre of bodyguards for protection. Pro-life displays are frequently attacked and torn down. Some controversial speakers actually face riots, vandalism, and violence prior to having arrived and prior to having actually said anything—and even feminist icons like Germaine Greer are having their speaking engagements targeted for refusing to embrace the current transgender craze. One Pew Research Poll in 2015 even reported that 40 percent of millennials supported limited speech that offended minorities — and the categories of those who qualify as “minorities,” of course, are growing by the week.

They don’t believe in freedom of religion.

For years, gay rights activists insisted that they had no intention of forcing their views on anyone, and claimed that those Christians warning that the LGBT movement intended to attack religious freedom after the legalization of gay marriage were lying. As it turns out, the gay activists were lying brazenly — in one pro-gay documentary prior to Obergefell, 8: The Mormon Proposition, a number of LGBT campaigners bristled in righteous indignation, accusing their critics of deceitful fearmongering. A few years on, every single warning delivered by Christian activists interviewed for the documentary had already come to pass. With a few notable exceptions such as Andrew Sullivan and Jonathan Rauch, most gay activists and their progressive counterparts reject the idea of religious liberty entirely. President Obama and his liberal comrades took to using the phrase “freedom of worship” instead—“worship,” of course, being an activity that can be kept safely within the walls of a church and out of the public square.

They are willing to coerce you into saying words you do not want to say in order to enforce their ideological agenda.

From cosmopolitan centres like New York City to nations like Canada, trans activists are attempting to pass legislation that redefines human rights, freedom of speech, and the very definition of violence. Recent legislation in Canada, for example, can be used to prosecute people for refusing to refer to trans people by their “preferred pronouns,” an ever-expanding category that includes nonsensical words like “ze” and “zir.” This is no longer even restricting what people can and cannot say — no, trans activists want to take a totalitarian step forward and dictate what people must say. Their right to be called whatever they want — and they continue to make things up as we speak — is now, progressives insist, a “human right.” Not referring to a person by the specific pronoun of their choice, on the other hand, can actually be classified as “violence,” a word that will, in the hands of progressive activists, soon be rendered as meaningless as the world “justice.”

Progressives believe it is a fun family day out to take your children to the Pride Parade, where they will be exposed to the genitalia of adults, half-naked drag queens, and simulated sex acts, but they also believe that they would be far better at raising your children than you are, because they are far more open-minded. Thus, legislation recently passed in Ontario indicates that if parents appeared insufficiently enthusiastic about the potential desire of their children to obtain a sex change courtesy of the trendy transgender delusion, those children could be removed from your care and placed in a haven run by adults who are more than willing to allow children not yet old enough to buy alcohol undergo genital surgery that will irreversibly alter their bodies. Progressives are not bluffing in their rhetoric — they’re all in, and your children just might end up being the stakes.

They only use science when it is convenient for them.

As I’ve written before, progressives claim to be obsessed with scientific data, but promptly abandon it when it no longer suits their agenda. Academics who point out that there is no scientific basis for the current transgender craze are thus shunned as hateful transphobes. Climate change models are thus impeccable evidence that we must restructure the global economy, but the ironclad scientific consensus indicating when life begins in the womb must be ignored. Even ultrasounds, embryoscopy footage, and medical textbooks are not enough to make progressives consider the ethics of abortion — although ironically, any effective abortionist could tell you all about the pre-born child in the womb. After all, he’s the one that has to crush the head and twist off the little arms and legs with forceps.

They see Christianity as more of a threat than Islam.

Ever wonder why progressives won’t refer to “Islamic terror”? Easy. They see the world in Marxist terms, and in their world, Western Civilization as founded by white Christians is always the oppressor and those with a bone to pick with the West are always the oppressed, responding to some injustice. That is why you will see more rage from California officials about states protecting the religious freedom of Christian bakers than you will in response to a mass shooting committed by a Muslim. That’s why the progressive response to another round of ISIS butchery somewhere in Europe is always “live like this never happened (unless you’re one of the dead ones, of course) because that’s how we win!” On the other hand, someone who expresses suspicion over the veracity of the claims made by transgender activists will immediately become the target of a left-wing holy war. Progressives have no time to get angry at Islamic terrorists who toss gay people off buildings. They’re far too busy being furious at a pizza parlor that declined to serve a gay wedding.

They are completely willing to destroy your life if you disagree with them.

Perhaps one of the key differences between progressivism and Christianity is that Christians believe in forgiveness, while progressives will happily destroy your entire life for the slightest of secular heresies. Anyone who says something that is now considered homophobic will have to either deliver maudlin apologies on the confessional talk show circuit or be shunned. Academics who cannot keep track of this week’s white privilege cisgender trans activist purity code and bump into the tolerance buzz saw are likely to be gutted like a fish — student mobs now enjoy using their reputation for physical violence to demand that professors they dislike be fired, immediately. Christian businesspeople who have struggled most of their adult lives to create a little bakery or other establishment can be a victim of the rainbow blitzkrieg in the blink of an eye. Real people are being destroyed by the #lovewins crowd, and they don’t care.

Progressivism is poisonous. They want the State to co-parent your children, and believe they know better than you do. They use science as a cudgel to further their ideology, and abandon it when it is no longer useful. They believe in the violent destruction of little human beings in the womb, but claim that not using made-up words like “ze” or “zir” is “violence.” In short: If you’re a Christian who still clings stubbornly to the orthodoxies that have defined Christianity for 2,000 years, they hate you — and they don’t have any problem saying that. There are many other reasons progressivism is dangerous, of course. But those few, I think, highlight why we must fight them tooth and nail for what remains of our countries and our cultures.