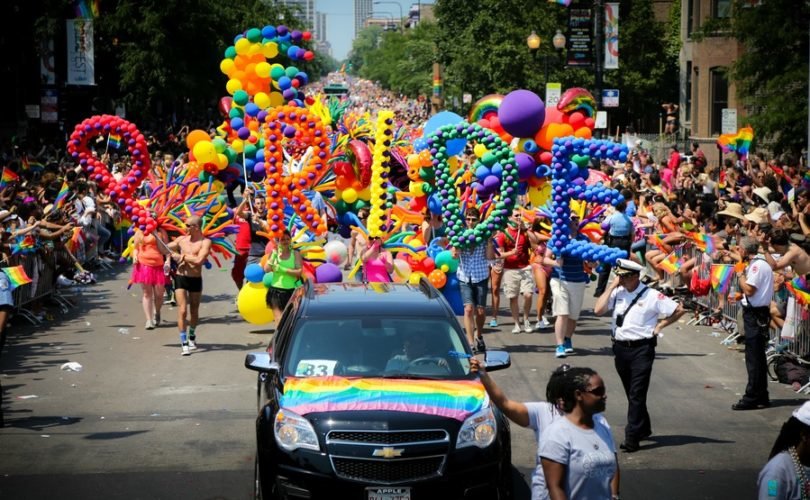 Our tax dollars are used to fund Pride Parades that are starting to look like public orgies.Shutterstock

When abortion activists came out shrieking with rage at Canadian Member of Parliament Stephen Woodworth’s suggestion that a committee examine human life in the womb in 2013, he was somewhat surprised. When the Canadian government kowtowed to feminist hysteria to shut down MP Mark Warawa’s motion to condemn gender-selection abortion, Woodworth noticed a trend—and coined a new term. What we’re seeing is “abortionism,” he told me in an interview some time ago. “Abortionism” is essentially a philosophy that raises abortion to a sacred status, above all other democratic principles.

I agree with Mr. Woodworth, but I think the problem goes much deeper than abortion. Abortion’s now-sacred status is symptomatic of something far more sinister: the sweeping success of the Sexual Revolution. So-called “sexual rights” are now considered to be the most important “rights” our society has, and take precedence over all other rights, regardless of how fundamental they are.

Freedom of speech? This is now a quaint concept that does not apply, for example, to any sort of pro-life activism, especially and ironically on university campuses. Nothing has the ability to irritate me quite as much as the mewling first-year feminist fascists of the Womyn’s Studies Department scurrying to submit their campus editorial on the “limits of free speech” the second pro-lifers show up on campus to engage university students in a discussion on a serious topic. Pornography, nude demonstrations, and virtually any form of sex-related activism is welcome—unless you happen to be opposing something, in which case it is not. When I was in university, for example, our “Cemetery of the Innocents” display was trampled and destroyed by a student politician who then took to the campus paper to call us the Hitler Youth.  On campus after campus across North America, so-called feminists respond to pro-life activism the same way: Shut down the debate.

Religious liberty, too, is being dispensed with at an alarming rate. After all, our culture has abandoned religious values, so once we’ve chiseled and hacked the last Ten Commandments sculpture off the last courthouse, we can put those quaint beliefs in the trash can alongside it. Businesses that disagree with gay marriage are being forced to shut down. Churches in Denmark have been ordered to perform gay weddings. Our tax dollars are used to fund Pride Parades that are starting to look like public orgies. The Sexual Revolutionaries are not, for the most part, about living and let live—only look at the Trinity Western University case. They are about compulsory acceptance.

Sexual rights, in other words, take precedence over all other rights. In the Netherlands they’re talking about hiring prostitutes for disabled people to ensure that their “right to sex” won’t be violated.

When woman-beater Jian Ghomeshi defended his love of sexual violence by announcing that “sexual preference is a human right,” he knew he’d have quite the audience—and just as in the case of gender-selection abortion, most people would instinctually nod and “not judge” anything related to sex—even at the expense of respect for women. Indeed, men are now to be allowed into female bathrooms, because the right of women to feel safe and secure in the bathroom does not trump the right of a man to decide that his penis is irrelevant to his gender. Like Ryan Wigley of the United Kingdom, for example, who literally decides which gender he will be in the morning depending on how he feels that day. He is, he explains to us with incredible seriousness, bi-gender.

But don’t laugh, or you’re transphobic.

There are signs that things could be improving slightly, that our culture may be getting fatigued by the constant hyper-sexualization of everything. Jian Ghomeshi’s “but the girls let me hit them” defense didn’t work, and he’s been criminally charged. Mainstream publications are taking an honest look at the negative impact of pornography almost weekly now. Public opinion on the abortion issue indicates that people don’t view it as the closed issue many of our politicians would like it to be. And most essentially, many Christians are starting to realize that if they don’t point out that the Emperor has no clothes, soon schools might be teaching children that since the Emperor has decided he is in fact wearing clothes, then physical reality is irrelevant.