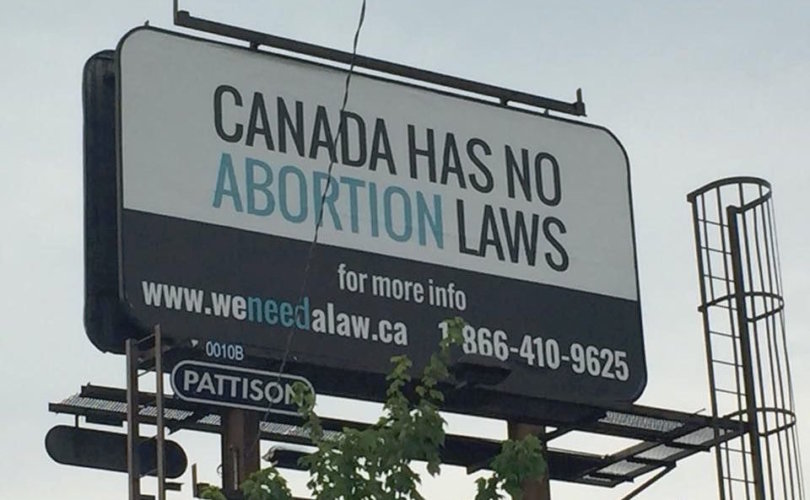 CANADA, November 2, 2018 (LifeSiteNews) – If you needed any evidence that Canada’s abortion activists are incapable of having a mature, informed discussion and prefer to simply shut down any inconvenient facts by any means possible, look no further than the almost farcical response to a campaign by Canadian lobby group We Need A Law (WNAL).

Early this summer, thirty billboards went up from Victoria to Halifax, reading simply “Canada Has No Abortion Laws,” followed by We Need A Law’s website and a phone number (I spotted two of them during my travels: one in downtown Brantford, the other near Kamloops). This is a rather anodyne and factual statement, and has been true since the Supreme Court’s R v. Morgentaler decision of 1988. It is difficult to see how such a statement could actually cause controversy.

But this is Canada, and the abortion activists here are distinguished for the ability to become unhinged at the slightest provocation. “I think it’s trying to foster fear and stigma and I think that kind of message can be really dangerous,” Sarah Baddely, the Halifax Chair of the Women’s Legal Education and Action Fund, sniveled to Global News. Other abortion supporters also chimed in to claim that this bland legal fact could constitute “harmful messaging.”

These reactions are staggering in their dishonesty and hypocrisy. “Joyce Arthur, spokesperson for the Abortion Rights Coalition of Canada, has taken many opportunities to state that Canada has no abortion laws,” Mike Schouten of We Need A Law told me by email. “And yet, she described our ad with words like ‘demeaning, discriminatory, and degrading.’ What is demeaning is to think that women, or anyone, want anything less than the truth.”

Nonetheless, the abortion activists actually succeeded in getting facts that they regularly trumpet themselves suppressed. “The ads were unapproved by an organization called Ad Standards,” noted WNAL’s legal counsel Tabitha Ewert. “Ad Standards has no legal authority, but most of the major advertisers voluntarily submit to their decisions. Ad Standards has a process where anyone can complain about the ad they see, a council will review the claim and decide if the ad is misleading, offensive, discriminatory etc.”

This is where it gets even more Orwellian. “In our latest communication with Ad Standards, we requested a clear explanation of what they think the law is in Canada,” Ewert told me by email. “In response we were told that our ads are ‘literally true,’ but that ‘that fact obscures reality.’ They go on to suggest that the law is that Morgentaler decriminalized abortion. That means their understanding of the law is that abortion is decriminalized. In other words, the law is there is no law.”

And how do they justify this? Simple, apparently. According to Ewert, “They have decided they don’t need to concern themselves with ‘precise legality or literal truth of a presentation’ but only with the ‘general impression’ of the advertisement.” In other words, Ad Standards worked with abortion activists to suppress facts that they admitted with “literally true,” but might give a bad impression of abortion in Canada. They deliberately worked to keep facts that could hurt their agenda away from Canadians.

It is in some ways not surprising that abortion activists want to keep Canada’s lack of abortion laws from the public, especially considering that about 77% of Canadians are unaware of this status quo. At the Canadian Centre for Bio-Ethical Reform, we have had thousands of conversations with Canadians both on the streets and door to door, and we find that people are generally horrified to discover that abortion is permitted until birth. It is in the best interests of abortion activists to hide this status quo so that their extremism—and the extremism of Canada’s abortion regime—does not become a matter of discussion.