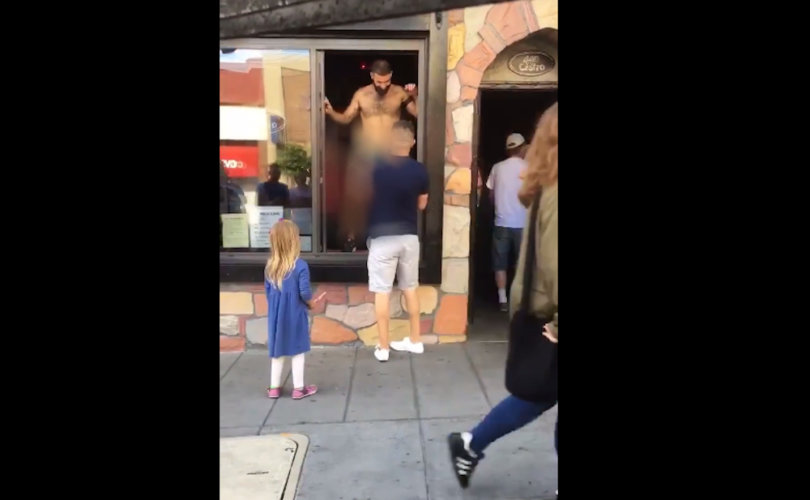 June 27, 2017 (LifeSiteNews) – A shocking video has surfaced showing a little girl waving a rainbow flag in front of a nearly nude male dancer during a “gay pride” celebration.

She appears to be all alone on the crowded sidewalk as she watches the man gyrate and provocatively tug at his crotch.

Shot through the crossbars of scaffolding, the video has a voyeuristic, “peeping Tom” feel, as if the guys with the camera sense the evil naughtiness of what is going on. The barrier between them and the girl underscores the fact that they prefer to anonymously mock her rather than help her.

During the short video, 40 or so people stroll by and walk around her as if she were nothing more than an inanimate object, as if it were utterly unextraordinary – mundane – to witness the destruction of innocence in a child. The passersby barely even notice her.

But the guys taking the video do notice her, and as the video proceeds, they laugh at her and make wisecracks:

I wanna be like that when I grow up …

Where is mom and dad?

That is too precious.

That is kinda scary, though.

These adult males are not expressing concern for the little girl. There appears to be no innate instinct to protect her – only a misogynistic impulse to laugh at this poor kid  surrounded by mostly zombie-like gay revelers, stuck watching the near-naked guy dance, strut and pose. Even when one of them asks, “Where is mom and dad?” it’s said with a snarky tone, feigning morality.

If you dare, you can watch the video here.

The dominant characteristic of the adults in this little girl’s world that afternoon was coarseness.

Last year, Radio Canada offered tips on attending “pride” events with small children. The first bit of guidance is chilling: “Be open-minded. Your kids will probably see boobs and penises. There will be bodies of all shapes, sizes and in all states of undress.”

The sage advice continues, “For parents like Ian Duncan, dad to 3-year-old Carson, this is all part of the appeal. ‘We’re not body shamers,’ he says. ‘It all feeds into my son’s emotional intelligence and sexual development. And it’s never too early to think about that.’”

Got that? This gay dad says, “It’s never too early to think about [sexual development],” even for his toddler.

“We are creating a generation of super-sexualized children,” said Fred Kaeser, the health director for the New York City Department of Education in his Psychology Today blog. “Kids are being exposed to sexual matters that were previously only in the purview of adults and the greater the exposure the greater the consequences can be.”

Kaeser continues, “The biggest impact, however, that the super-sexualization of children can have is its overall looming effect on the day-to-day existence of kids. Sexuality becomes much more of a player than it should, irrespective of the child's age. It's as if children's normal curiosity towards sexuality gets ratcheted up a number of notches as if on steroids.”

Jonathan Van Maren, blogging about the heartbreaking video at The Bridgehead, said, “For some reason, this is not considered child abuse, and is not considered creepy. Rather, the penises of Gay Pride revelers are now supposed to be interesting discussion opportunities for little kids who need to be sexually developed and open-minded.”

The gay guys making the snarky comments about the girl were right about one thing:  “Kinda scary.”