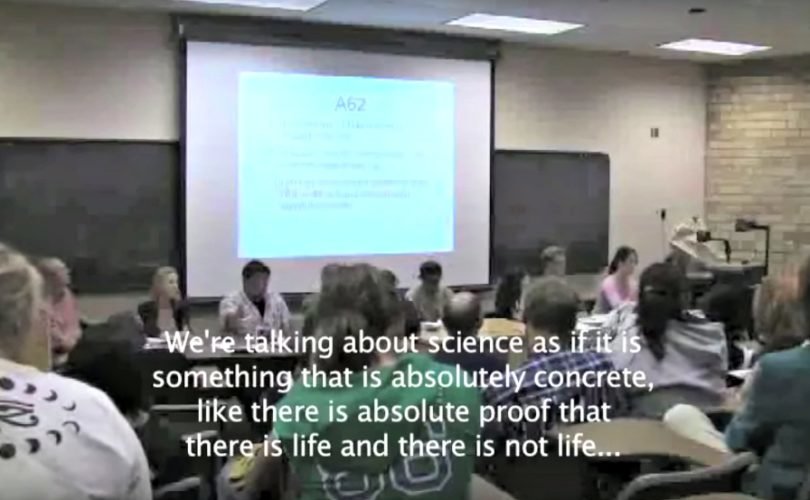 Christian conservatives are forever being accused by militant secularists of ignoring science whenever it happens to appear to contradict their previously conceived dogmas. The irony, of course, is that in many cases the criticism can just as easily, and even more accurately, be applied to militant secularists.

Surely one of the most glaringly obvious instances of this is the determined effort by pro-abortion activists to pretend that the unborn child is not a human being – despite all the irrefutable scientific evidence that proves that it clearly is.

Any of us who has ever debated a militant pro-abort has experienced this. Science is everything until the question of fetal development arises, and then science doesn’t matter one whit, because the “right to choose” is absolute, trumping science and even, if necessary, the most fundamental right of all: the right to life. But perhaps the most glaringly painful instance of this blind prejudice in action is found in a video by Personhood USA I stumbled across today, in which a number of Planned Parenthood reps continually urge college students to ignore science.

While I tend to be extremely wary of “cherry-picked” footage taken out of context that makes people look bad, in this case I can’t imagine any context where these statements would have stood muster. Watch as these reps tell the students that science is not “absolute truth,” compare the mother of a child to a “host,” the unborn child to a “virus,” announce that “science cannot be applied to my body,” and appear to cast doubt on the very possibility of ever discovering for certain when the heart of an unborn child actually begins beating.

This, my friends, is brainwashing in action. The is the power of pro-abortion propaganda – so powerful that it can convince those who under most circumstances would be found to most ardently champion the power of “science,” to explicitly reject science when it comes to this one issue.

“My body, my choice.” “A woman’s right to choose.” These slogans have so completely infiltrated the minds of pro-abortion extremists that they literally cannot see the world outside of their framework. They cannot deviate from these pat, and ultimately meaningless slogans, one inch – even if science demands that they do so.

The fact is that science is on the side of the pro-life movement – ultrasound, in-utero photography, and graphic images of aborted children all prove the humanity of the unborn child beyond any shadow of a doubt. And so abortion supporters are scared – so scared, in fact, that they have been forced to reject one of their own dogmas – the absolute truthfulness of science.

Thanks to science, pro-aborts are in retreat, and pro-lifers are on the offensive.