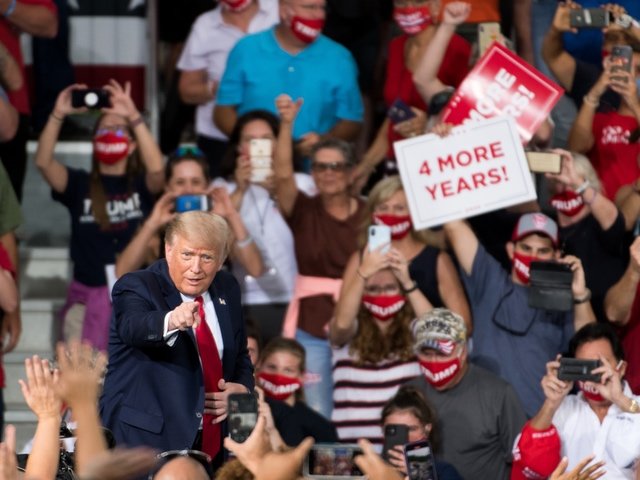 (LifeSiteNews) – Though he still won’t come out and say it, Donald Trump is doing everything he can to hint that he intends to take another shot at the White House in 2024, most recently during a golf outing where he corrected a companion who called him the 45th president to add, “45th and 47th.”

But should he? And if he does, should we be “very, very happy” about it?

To be sure, Trump did a lot of good things across a lot of issues during his four years, including in the areas of life, religious freedom, and gender sanity. He retains one of the most intensely loyal fan bases in politics. He called out media dishonesty like none of his predecessors. He seemed to have a special knack for driving the Left nuts. And there’s something undeniably tempting about the prospect of getting some well-deserved payback for Joe Biden’s 2020 lies and how much worse at the job he’s turned out to be.

But the temptation for revenge has a way of making us lose sight of other critical considerations, like how Trump would actually fare against the Democrat candidate, and what he would do with the opportunity if he won.

Note well that I didn’t say “against Biden”—while the current incumbent’s abysmal performance gives Trump a goldmine of material to work with, the clear signs of cognitive decline that make Biden such a weak candidate also make it a very real possibility that Democrats will swap him out for someone younger, better spoken, and not saddled with Biden’s tremendous political and personal baggage.

What’s more, it’s not at all clear that Trump still has the mainstream appeal to win a national election. Even if vote fraud in 2020 really was large enough to flip an election that Trump rightfully won, the fact would still remain that public support for Trump over Biden was narrow enough for fraud to close the gap in the first place. After COVID, the post-election fight, and the January 6 fiasco, is it probable that the electorate is more inclined to support him at levels beyond stealing range? Some polls suggest not, though polls admittedly mean little either way more than two years ahead of an election.

Assuming Trump could and would win, we then have to consider, without rose-tinted glasses, what kind of president he would be in term two. Obviously we’d at the very least get an end to the myriad ways Biden is actively harming the country and an administration more sympathetic to us and our causes. But would we take steps toward actually healing America, or just slow the bleeding for another four years?

Trump’s aforementioned good deeds were many, but because they were mostly executive actions they were also the most transitory—as Trump had done to Barack Obama’s legacy, Biden immediately began dismantling Trump’s with the stroke of a pen.

On the deeper structural problems demanding presidential attention, the Trump years were far less impressive. He rubber-stamped most swamp budgets without a fight. He didn’t clean leftist saboteurs out of the Justice Department (which is a big part of why Planned Parenthood got away with fetal organ trafficking on his watch) or social-justice warriors out of the Pentagon. His selection process for judicial nominees was a disaster, leaving pro-lifers on pins and needles waiting to see what the Supreme Court will do about abortion. Almost nothing was done about vote fraud except for a failed commission that was doomed from the start thanks to bad appointments.

Is there any reason to believe that Trump has learned from any of these mistakes, that he’s gotten any better at determining whose advice to listen to and who to ignore? Just this past week he endorsed yet another establishment Republican over a more conservative candidate, this time in the GOP primary for Tennessee’s 5th district House seat, so it doesn’t exactly seem likely.

Perhaps most importantly of all, Trump is deeply compromised on what is arguably the most pressing issue of the moment, the COVID vaccine pressure campaign. While he wouldn’t mandate the shots like Biden is trying to do, the simple fact is that our current crisis wouldn’t be happening right now if the Trump administration hadn’t rushed them into existence in the first place (instead of prioritizing early treatment options while pursuing vaccine development under more traditional testing standards) and invoked the Public Readiness and Emergency Preparedness Act to give the drug companies sweeping immunity for potential side effects.

And because Operation Warp Speed is the only major aspect of Trump’s legacy that enjoys elite approval and won’t be dismantled by Democrats, he’s never going to let it go. Just ask yourself one simple question: if Trump showed no inclination or ability to reform federal agencies even when he didn’t have a glaring conflict of interest, what are the odds of him being the guy to clean up our corrupt federal health bureaucracy and get to the bottom of what the shots are really doing to people?

Right now, Donald Trump seems to think that his personality-driven fan base, combined with Biden buyers’ remorse, will make 2024 his for the taking. But the discontent over his as-yet-unrecognized mistakes is real, and it’s growing. Especially with a certain Florida governor delivering result after result on Trump’s issues plus establishing himself as a national leader for COVID freedom, the country deserves concrete answers from the 45th president on all of this before we even think about letting him try to become the 47th.