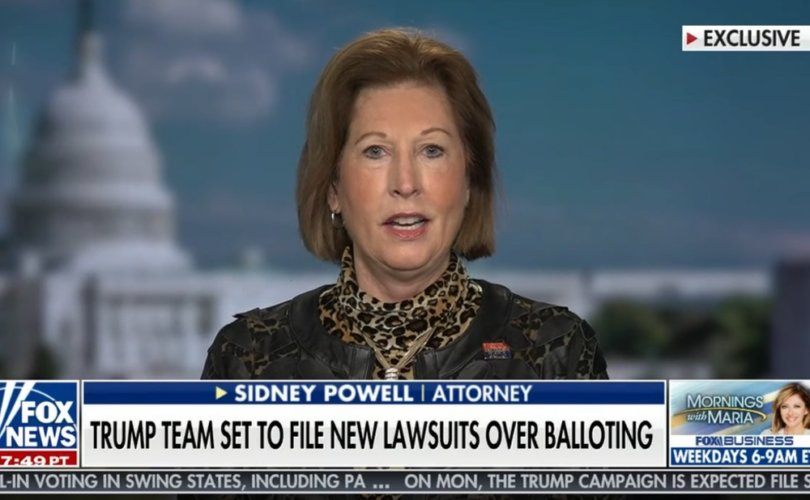 “Sidney Powell is practicing law on her own. She is not a member of the Trump Legal Team. She is also not a lawyer for the President in his personal capacity.”

Some interpreted this to mean that there had been falling out between Powell and Giuliani, or worse, that Powell had been “fired” by the president.

The thought that the key legal actors charged with saving our republic from a brazen election heist might have had a falling out was disconcerting.  The Left was gleeful; conservatives were glum.

Powell’s own statement set the record straight.  Unfortunately it was delayed by the fact she had just been suspended by Twitter, an all too common fate for anyone right of center.

STATEMENT FROM SIDNEY POWELL TO “WE THE PEOPLE”

I agree with the campaign’s statement that I am not part of the campaign’s legal team. I never signed a retainer agreement or sent the President or the campaign a bill for my expenses or fees.

My intent has always been to expose all the fraud I could find and let the chips fall where they may —whether it be upon Republicans or Democrats.

The evidence I’m compiling is overwhelming that this software tool was used to shift millions of votes from President [Donald] Trump and other Republican candidates to Biden and other Democrat candidates.  We are proceeding to prepare our lawsuit and plan to file it this week.  It will be epic.

We will not allow this great Republic to be stolen by communists from without and within or our votes altered or manipulated by foreign actors in Hong Kong, Iran, Venezuela, or Serbia, for example, who have neither regard for human life nor the people who are the engine of this exceptional country.

#WeThePeople elected Donald Trump and other Republican candidates to restore the vision of America as a place of life, liberty and the pursuit of happiness.

You may assist this effort by making a non tax-deductible contribution to www.DefendingTheRepublic.org.  #KrakenOnSteroids”

Reading Powell’s statement, you can see that she puts country ahead of party, and intends to call out lawbreakers regardless of whether they have a (D) or an (R) after their name. She has already suggested that Governor Brian Kemp of Georgia, who is a Republican, had a “deal with Dominion.”

This statement did not sit well with the Republican establishment, some members of which complained that she violated what the late President Ronald Reagan called his 11th commandment, “Thou shalt not criticize thy fellow Republicans.”

Others suggested that the statement is “all about money, nothing more.” Those who control the purse strings in the GOP and the Trump campaign wanted to make clear that Sidney Powell is not on the payroll.

That’s fine with Powell. As she notes above, she has her own nonprofit to fund her work, www.DefendingTheRepublic.org.  If you are able to do so, I suggest sending in a gift.  The work she is doing is absolutely vital to the survival of our constitutional republic.

Over the weeks since the election, she has uncovered more and more evidence of how computer voting systems can be used to commit voter fraud.  Dominion voting machines, operating with Smartmatic software can be manipulated in multiple ways by design.  In other words, these are “features”, not “bugs” or “glitches.” A great introduction to these features comes from OAN’s Chanel Rion, who has just done a special called “Dominion-izing The Vote.”

I am personally convinced by the many statistical analyses that show that large numbers of votes have been switched from Trump to Democratic challenger Joe Biden.  How some of the algorithms actually work is also becoming clear.  The affidavit that Powell has produced supporting that allegation that Dominion has worked with foreign governments, including Venezuela, is also compelling evidence.

A lot of people don’t want to talk about how electronic voting systems have been used to fix elections around the world for years, and want to talk even less about how they’ve been used in the United States.  That probably includes a number of Republicans.  But the numbers don’t lie.

As far as Sidney herself, she has doubled down on her claims.  She has gone from #releasetheKraken to #Krakenonsteroids.

If we win this—and my money is on the gal from Texas–Sidney Powell gets the next open seat on the Supreme Court.

While she’s waiting, she can head up the FBI and begin to clean out the mess there.