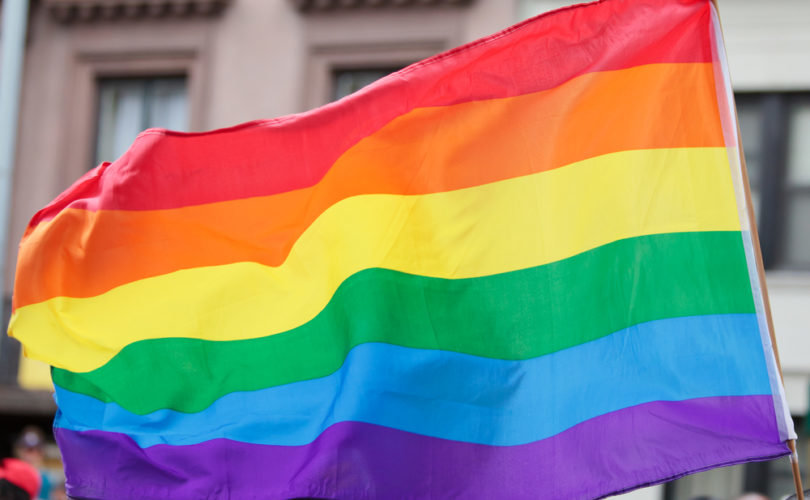 WASHINGTON, D.C., May 31, 2019 (LifeSiteNews) — The “straight” world — shorthand for those who do not identify as LGBT — has bought into lies asserting the normalcy of homosexuality, transgenderism, and the redefinition of marriage to such an extent that disagreeing with the new LGBT dogma is no longer just a violation of “political correctness” but is increasingly criminal.

To not honor sodomy is seen as perverse, and to seek to prevent the mutilation of the sexual organs of your children is deemed “child abuse,” an offense that can trigger losing custody of your child.

The “straight” world is lost, having made itself subservient to LGBT masters who have dubbed them “Cisgender,” a term that makes being in harmony with nature sound abnormal.

What is the answer for a beguiled world that lacks the requisite intellectual curiosity, allegiance to truth, and will to free itself? Where will it come from?

The beacon that will lead society out of this thick darkness may very well arise from a surprise source: former homosexual and transgendered persons.

“I really believe revival is erupting from the gay community,” declared Woning.

Addressing a group of former gay, lesbian, and transgendered people in front of her, Woning said, “We are the first fruits of the beginning of a revival that is coming to America.”

Her words, though spoken softly, were riveting. Prophetic.

Afterward, I asked her if she could expand on her amazing declaration.

“The transformed lives of once gay people are a sign and a wonder to our generation,” wrote Woning, answering my question in her blog.

“In an age when it seems impossible for sexuality or gender to align to scripture, it is happening,” she continued. “Past generations sought physical healing as a sign of God’s presence, but what if today restoration of sexuality and gender were the miracle?”

“God is doing it. He is on the move on behalf of gay people everywhere,” she added. “A new Rainbow People movement is on the rise with an unexpected message of transformation.”

“In December 2017, I was awakened early one morning while I was ministering in England. I heard a whisper that filled me with excitement,” recounted Woning.

“God is on the move among gay people and He is doing unexpected things,” continued the small whisper. “Yours is the first wave of revival for the gay community. He is announcing His truth. He is restoring human identity.”

Immediately, I realized for the first time the gravity of our mission here at Equipped to Love. One of the profound and foundational values we hold is that freedom, complete freedom from same-sex attraction and gender confusion, is available to LGBTQ people who desire it. In fact, that’s a risky core value, because many ministries before us have wavered on that point. Testimonies from the generation before us reveal so many failed stories of this pursuit. That reality has galvanized our culture into believing that change is impossible.

A silver lining amid the chaos of the sexual revolution

Perhaps there is a silver lining to the chaos and conflict in our culture over sexuality and gender. … We are being restored to a place that acknowledges only Jesus’ love is enough. Only Jesus’ power and intimacy satisfies. We cling to His love when we cannot understand what scripture says. We acknowledge that discipline and mere philosophy are not enough to bring fulfillment. We are linking wholeness and truth to intimacy with Jesus.

A great cloud of witnesses

At last weekend’s Freedom March in Washington, D.C., the crux of this message was on full display. One former homosexual and transgender after another proclaimed freedom from the false identities and practices they had formerly embraced.

Their lives are more than just isolated instances of God’s power to transform: Their lives  are signposts pointing us, all of us — not just those trapped in the LGBT world — to the truth, dispelling the lies embraced by the western world. At this critical moment in history, their proclamation of truth is as important for the “straight world” as it is for practicing gays, lesbians, and transgender, for all have bought into lies equally. Not little lies. Big lies.

Professor Robert Oscar Lopez — a man who escaped the gay world years ago and who is now happily married with wife and children — exists as perhaps the most visible sign and wonder in this regard. His is the most important voice in the world today when it comes to understanding what has happened, and what must be done to resist and turn back the domination of LGBT ideology.

His epic, The LGBT Juggernaut: Time for Christians to Face Our Failure, is a must read.

Lopez clearly identifies the failures of conservative academics, politicians, and church leaders who were too timid to speak truthfully about the gay world and instead agreed to follow rules of engagement set forth by LGBT activists, resulting in spectacular losses.

It’s interesting that of all the conservative academics and activists who have been engaged in this battle for the last decade or so, it is Lopez who has risen to the occasion to show the way forward, especially as Congress now considers the horrific Equality Act.

There are others. Many others.

Walt Heyer is a former transgender man who is now the world’s most valuable resource for those who experience “transition regret.”

I had the privilege to be on a speaking tour in Hong Kong with Heyer in 2017. Every time he pulled his phone out of his pocket he had another text, email or phone message from someone somewhere in the world, desperately seeking advice because help to detransition is nearly impossible to find outside of Heyer’s ministry.

Walt Heyer’s life is a beacon.

Angel Colon and Luis Ruiz, who survived the 2016 Pulse Nightclub massacre where 49 died, are also bright beacons, traveling the world proclaiming the freedom from homosexuality they’ve found in Christ.

So are the 11 men who joined me in telling our stories in an amicus brief titled “Same-sex attracted men and their wives” for the U.S. Supreme Court as it deliberated the Obergefell same-sex marriage case in 2015.

So are the 200 ex-LGBT men and women who descended on Washington, D.C. for the 2019 Freedom March.

A great cloud of witnesses exists.

In the coming weeks, LifeSiteNews will share the stories of more former homosexual and transgendered persons who are publicly declaring their new lives in Christ.

These men and women are demonstrating with their own lives that the world can beat back the sexual revolution and undo the carnage it has inflicted on the world.