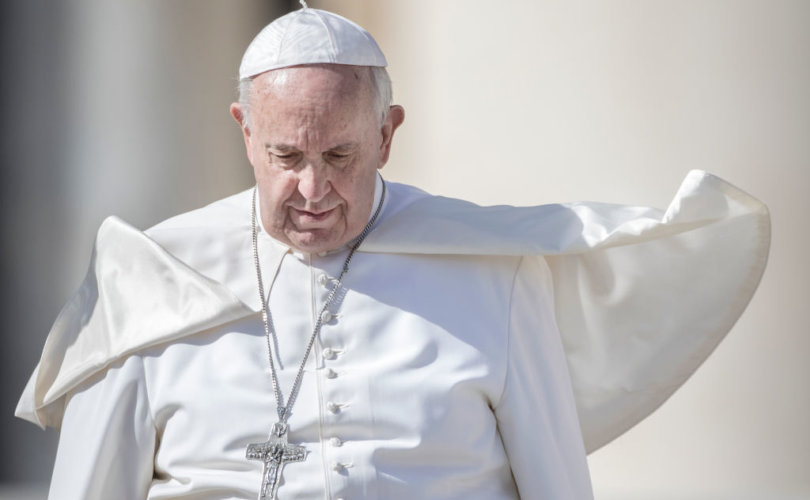 March 19, 2019 (LifeSiteNews) – If a picture is worth a thousand words, then the photomontage above tells quite a tale, on this, the sixth anniversary of Pope Francis’s papal inauguration on March 19, 2013.

As we know from the seldom dull annals of Church history, many popes have deserved, and received, abundant praise or bitter criticism from their contemporaries or from later ages. On the one hand, the papacy shines, like a jewel-studded crown, with dozens of saints who shouldered their burden of governance with heroic generosity and dedication. The papacy’s record in this regard puts to shame the record of any other institution; indeed, no series of rulers of any earthly empire or kingdom can hold a candle up to it for longevity, stability, constancy, and virtue. On the other hand, as history shows, the papacy—though protected from definitively committing the Church to error—is not, after all, protected from moral failings or intellectual debility, from catastrophic political blunders in pursuit of policy or from excessive friendliness to the Church’s enemies.

In a forthcoming book, Martin Mosebach vividly describes how we find both sides of the papacy illustrated in the first pope:

Even those hostile to the papacy would have to admire the shape and construction of this office that, from the beginning, has preserved it—in the person of Peter—from crises. As the successor and representative of Christ, as the Rock on which the Church is to be built, even the most capable office-bearer is bound to fail. For this office of “confirming his brothers in faith” Christ chose the very disciple who, while he had always shown courage and vitality, failed when it came to acknowledging his Master. “Then he began to curse and swear”—the evangelist, describing Peter’s apostasy beside the fire in the High Priest’s courtyard, leaves us in no doubt as to the seriousness of this betrayal.

By choosing Peter, Christ shows that the office of representative requires no special intellectual gifts and talents, no firmness of character and no proven stability—which means that every man is equally fitted and unfitted for this office. Christ became man and therefore every man is equally equipped to represent him. No pope can betray Christ more than Peter did in that courtyard, no pope can follow Christ more than Peter, who got himself crucified on his account. The choice of Peter establishes the clear distinction, in the Church, between the office and the person. It is this principle that makes it possible to encounter the incarnate, grace-bestowing Christ even in unworthy human beings. The choice of Peter also makes concrete the Catholic anthropology that sees man as weak and sinful, and yet called to pursue the highest perfection.

Today, we are required more than ever to lean hard on “the distinction between the office and the person.” The papacy deserves our veneration and our adherence; the incumbent pope may or may not be worthy of his office and may, in fact, be a major scandal, a stumbling block to the faithful and to those outside the flock. Christ does not and will not abandon His Church, even when churchmen abandon Him. The Head of the Church is and always remains Jesus Christ. The phrase “Vicar of Christ” brings this out quite clearly: a vicar is one who stands in for someone, who represents Him, and has authority solely from and for Him. This concept not only does not lead to hyperpapalism, it undermines it in principle by showing the pope to be a stand-in for the actual eternal Head of the Church. The pope represents this Head on earth—and he can badly fail in his duty.

Mosebach rightly reminds us of a truth that, in healthier times, might seem a truism: man is weak and sinful yet called to pursue the highest perfection. The pope, more than any other, is reasonably expected to pursue this highest perfection, not only to set a good example for the other shepherds and sheep, but more particularly to secure his own salvation and the good of the flock entrusted to him.

Alas, we see weakness and sinfulness abounding at the Vatican and throughout the Church. The evidence of corruption has become so multifaceted and voluminous that it is impossible not only to deny it, but even to avoid corrosive contact with it. The prophet Jeremiah has words for a situation like this: “My people have been lost sheep. Their shepherds have caused them to go astray” (50:6).

The photomontage above puts before us an unprecedented number and variety of book-length critiques published over the past few years, documenting the doctrinal aberrations and failures of Pope Francis, which are cause for the greatest alarm and the most fervent prayer and penance. We pray that where sin abounds, grace will abound the more.

Meanwhile, we know that the evils under which we suffer must be temporary; the only states that last forever are heaven and hell, which are not of this world. We may also take comfort and courage in the knowledge that God will not be mocked, but has already prepared in His eternal wisdom the doom that will come upon those who lift themselves above their humble status as successors, not replacements, of the apostles: “As for your terribleness, the pride of your heart has deceived you, O dweller in the clefts of the rock, holding the height of the hill. Though you should make your nest as high as the eagle, I will bring you down from there, says the Lord” (Jer 49:16).

To high-ranking prelates enjoying favor, influence, and power, the prophet cries out: “You also, O madmen, shall be brought to silence; the sword shall pursue you” (Jer 48:2)—be it the sword of civil authorities or the sword of inevitable death.

The “land of images” might call to mind disturbing light shows on the façades of Roman churches; madness over idols calls to mind the frenetic chasing after the “values” of European liberalism, the abstract “ideals” of modernism, and the “cult” of liturgical change. The “wild beasts,” those who live by their carnal passions; the “hyenas,” those who make incessant noise about progress; the “ostriches,” those who bury their heads in the sand denying that there is a crisis—all these will find themselves cast off to Babylon. It is only a matter of time.

An infallible law of the moral order guarantees, and the world’s history copiously illustrates, that evil necessarily consumes itself, and its protagonists end up destroying each other: “The mighty man has stumbled against the mighty; they have fallen both of them together” (Jer 46:12). The mountain of literature critical of the Bergoglio pontificate and curia offers a somber witness, for our time and for future ages, to the inundation of wickedness in high places, and urges us to persevere in the Christian battle against the world, the flesh, and the devil.