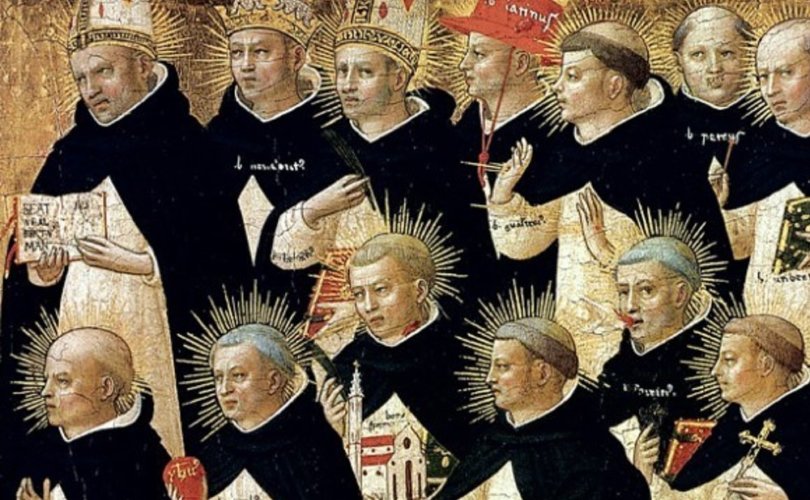 November 2, 2018 (LifeSiteNews) – On yesterday’s great solemnity of All Saints, Catholics remember the innumerable host of holy men and women and good angels who have loved and do love God above self and are receiving from His hands the gift of eternal life in glory. Needless to say, we will not know the names of most of the saints until—God willing and aiding—we ourselves join their number.

One thing we should hesitate to do is to entertain skepticism about the saints whose lives have been handed down to us on the earth. And yet this has been the norm for decades, under the influence of the seductive guise of “scientific criteria” for the vita sanctorum. Historians both Catholic and non-Catholic have too easily called into question the stories told about saints, especially the most ancient ones.

However, in acting this way, much of the truth that God wishes us to gain, and much of the fruit we could derive spiritually from the study of religious history, will be lost. Concerning the acts of the early martyrs (whose official “lives” are so often doubted), Fr. Peter Regalatus Biasiotto writes:

To suppress all legend would take from us in some cases the only way which can lead us across a chasm separating us from our forebears. Legend is indeed a precarious bridge to cross such a gap, but a bridge it remains. It may be weighted down with the accumulations and parasitic growths of centuries, and it may be weakened under its own enormous weight of improbability. But the very ivy of fancy which at one time forced its way between the stones, today keeps those poorly-jointed arches from falling into oblivion. We cannot cross a chasm on such a bridge, but the fact that there is a bridge tells us that we are face to face with a chasm and not a void—that beyond the dark and seemingly impassible gorge there is a solid foundation which offers a firm support to the mossgrown and picturesque bridge of legend. (History of the Development of Devotion to the Holy Name, 14)

Hilaire Belloc defends a similar thesis in a fine essay called “On Legend”:

The reason why legend fell out of fashion, was abused and ridiculed and at last almost lost, was that men fell into a habit of measuring everything exactly and neglecting whatever could not be exactly measured. That has been the great intellectual disease of our time, and it arose from the success achieved in physical and other sciences through exact measurement. . . . The generation which no longer listened to the story of the miraculous bird at whose singing one hundred years passed like one hour, came to deny immortality and eternal beatitude. That is what happens when men are starved of legend. (Essays of a Catholic, 162–63)

A gross example of rationalism in this regard is an essay by Fr. Edmund Colledge, “The Legend of St. Thomas Aquinas,” in which it seemingly never occurs to the author’s mind that miracles might have been more frequent and more dramatic in the Middle Ages than today, and that there might be a good reasons for this discrepancy! Instead, one is left with the impression that behind every story of a saint’s extraordinary gifts or miraculous deeds there must be malicious cunning, miserable ignorance, or vulgar superstition.

Nevertheless, Colledge approves of Delehaye’s opinion that to eliminate from a saint’s legend everything which seems incredible to a twentieth-century mind “is to employ a system which is arbitrary, illusory, confounding the true with the probable.”

One should at least take a respectful pause before accepting a theory of hagiography that would require many of the witnesses at Thomas’s canonization process not merely to be handicapped with poor memories, but to be lying outright—“pious fraud” is one way Colledge puts it. An example is the insinuation that the Cistercians of Fossanova invented the story of Thomas commenting on the Song of Songs in order to make a stronger case for keeping his relics.

I am not saying that every single element in the received legends of Thomas should be accounted true, but only that the attitude exemplified in this essay is precisely the sort of attitude that made Our Lord refuse to perform miracles for those who faithlessly demanded evidence, whereas those who were already willing to believe and who did not need miracles were graced with them. There are other ways to account for faulty legends—stories getting confused or embellished in the retelling, poorly-founded hearsay, gratuitous assumptions about “what must have been so.” None of these, as such, involves mendacity.

Unfortunately, Fr. Jean-Pierre Torrell, a greater biographer than Colledge, finds it hard not to indulge, on occasion, in fashionable dismissiveness regarding stories told of Thomas Aquinas. All the same, he is willing to say that miracles should be read as “palimpsests” beneath which we can glimpse historical truths.

The legends, stories, quotations, and relics we possess of the saints of God should be extremely precious to us in our pilgrimage to heaven, and we should keep learning from them to become the outstanding Christians that Christ is calling us to be—whether we are absolutely sure of certain historical details or not. While we don’t need to be gullible or superstitious, the main thing is not to get distracted in the examination of details but to see in the saints, including the “legendary” ones, exemplars of holiness to be venerated for their victory and imitated in their virtues.