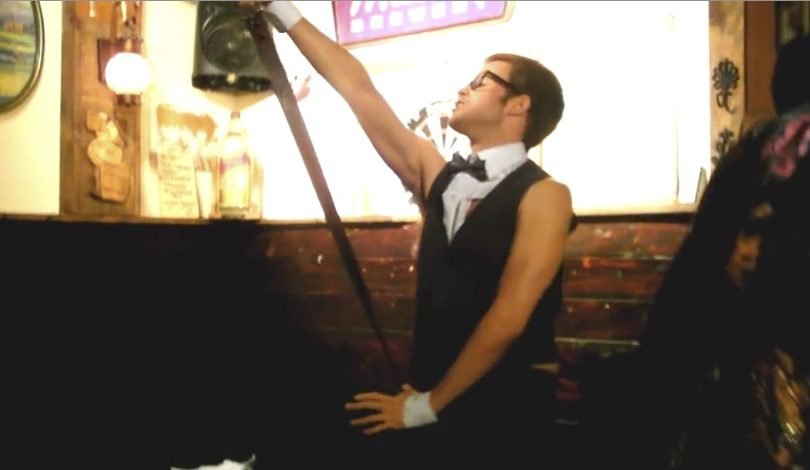 This week I'm taking a break from my essays on how to form in your children a wholesome moral imagination.  Instead I'd like to engage my readers in a fantasy of decadence.

Let's suppose that a prominent child-oriented charity in a once Christian nation hires somebody to meet with teenagers to encourage them to be “shameless idealists.”  Imagine that the pedagogue is a male stripper for a gay ho-down called Boylesque.

At the Boylesque webpage, suppose you find a Mountie in a passionate kiss with a lumberjack, who is holding a bottle of beer foaming over. “Imagine your dearest Canadian icons,” say the Boylesque promoters, “stripped down and slathered in maple syrup for your viewing pleasure!”

Free the children? Teach them to blush. It's a good start.

The page features “Ray Gunn,” the Canadian “Mount-Me Police,” a rousing rendition of “O Canada” to make you “stand at attention,” an ad for a Valentine celebration of “debauch” at “our den of iniquity,” somebody named “Bruin Pounder,” somebody else named “Sigourney Beaver,” some stars of a “bisexual-athon,” and so forth.

Imagine third-rate puns, puerile fascination with the parts down under, dopey titillation, debauchery, and “putting male nudity at center stage where it belongs.”

Now, let's see, what else can we add to this eye-rolling story? Suppose the boy-man who strips at Boylesque at night, after he works with girls and boys during the day, calls himself Mickey D Liscious. Let's give him an absurdly bogus education – a major in Sexuality Studies. Suppose the people who run the charity do more than look demurely aside from Mickey's mooning and lighting. They name him Rookie of the Year.

Now, to complicate the plot, suppose that people catch on to Mr. Liscious' nightly swinging, and complain to the charity. The directors say what cannot possibly be true.  They say they do not “discriminate” on the basis of what their employees do after hours. We presume that although whores and nudie wigglers may be welcome, people who write for conservative magazines would not be welcome, or embezzlers, pickpockets, bookies, loan sharks, dogfight promoters, or peddlers of contraband sealskin. The line has to be drawn somewhere. Prudence is a virtue. After all, we're dealing with boys and girls here. A priest who says, “Men and women are meant for one another, in marriage,” is to be shunned, but not somebody who simulates sex in front of hooting and howling strangers.

Let's add the icing to the fantasy. We'll call the charity Free the Children, and we'll suppose that Free the Children encourages Mr. Mickey D Liscious to tell teenagers to be “shameless idealists.”

Of course, everything in this tawdry and silly fantasy is fact. You can't make it up. No one would believe it.

You might suppose that I'd criticize Free the Children for its choice of Cool Child Companion, saying that he is the wrong boy to tell boys and girls to be “shameless idealists.” Mr. Liscious, for his part, believes that what he does at night and what he does during the day are of a piece, greasing the grooves and pistons of change. I take him at his word. He's right, and the directors of Free the Children agree. It's our turn to try to figure out what they mean.

By “idealist,” Mr. Liscious and his promoters do not mean “someone who believes that the immaterial is more real than the material.” Mickey is not giving lectures on Plato's Republic. They also do not mean, colloquially, “someone who believes in a high standard of personal virtue,” since such standards would deprive Boylesque of all those boys who like “a dirty flashmob” and “a Tim Horton's double-double served straight up.” They cannot mean that, because shame is what people with a strong sense of virtue often feel when they behave in a base or cowardly way.

The best they can mean is “unembarrassed promoters of some idea,” some fantasy of perfection upon earth, the Big Rock Candy Mountain, the dictatorship of the proletariat, a “better world,” and other gauzy dreams that earn you points at a beauty contest, while you tilt your head like a poodle and modulate your voice for caring and sharing.

And all I can say is that the last hundred years have been stuffed to the eyeballs with shameless idealists: shameless ideologues. They had an idea, or an idea had them, and shame on them for it. The more wicked among them had names like Lenin, Stalin, Trotsky, Hitler, Pol Pot, and Khomeini. The more foolish had names like Harold Laski, who carried water for Lenin; Beatrice Webb, who carried water for Stalin; and Neville Chamberlain, who made a nice little pact with Hitler and proclaimed “Peace in our Time.”

Wilson was an idealist whose ideas got the better of his prudence and shame. We paid for that idealism in a crushed and belligerent Germany. The flower people of the sixties were idealists who scoffed at “hangups.” They could gaze upon the stars and sing about the Age of Aquarius, while their children looked to the empty place at table where Daddy or Mommy used to sit. Margaret Sanger was a shameless idealist. Hospital dumpsters are full of the result.

We have had enough of shamelessness and foolish wars against reality.

You cannot make “the world” a better place. The world is the world, old and stupid. Man is a sinner, and worst when he forgets that he is. That's not to say that you should sit and do nothing. Do the dishes. Read a good book. Be kind to your bothersome neighbor. Darken the church door and bend your knee in prayer.

Accept reality, and do the hard and unheralded work of cultivating virtue. Children are imprudent because they lack experience. Let them learn prudence from their elders. It takes no courage to follow the dreamy fad of the day, and children are suggestible. Let them learn the courage to resist the foolish and ephemeral. Children are often intemperate, because they're full of energy and so are given to hasty action and violent passions. Let them master and marshal their passions by subordinating them to right reason. Children see the world in stark oppositions of just and unjust. Let them keep their strong sense of justice, but let them temper it with the mercy that comes from acknowledgment of sin. Let shame instruct them in clemency.

Deny reality, dive deep into vice, and you will be a slave. Free the children? Teach them to blush. It's a good start.