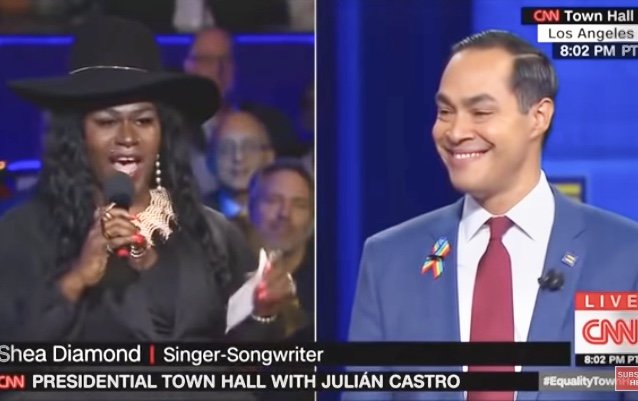 October 17, 2019 (LifeSiteNews) — Those of you who had the misfortune of watching CNN’s LGBTQ town hall last week got treated to the entire progressive clown car unloading on live TV, and the Democratic presidential candidates happily promising to legislate, fund, and champion the entire thing. But even as the CNN hosts and groveling politicians fell all over themselves to swear their allegiance to the rainbow flag and the agenda for which it stands, a few mistakes were made. Chris Cuomo, for example, accidentally made fun of Kamala Harris’ sanctimonious declaration of her pronouns, and promptly took to Twitter to apologize.

But as it turns out, Chris Cuomo need not have worried about his microaggression, as CNN host Nia-Malika made such an egregious mistake that she found herself accidentally guilty of perpetrating violence against the transgender community (transgender protestors frequently popped up throughout the evening to crash their own party and complain about the evening dedicated to discussing their demands.) When it was former Housing and Urban Development secretary Julian Castro’s turn to promise everything demanded of him, poor Henderson made an awful mistake.

“I want to bring in Shea Diamond, a singer-songwriter from LA,” Henderson announced. “She currently supports Mayor Pete Buttigieg. What’s your question?” A look of horror and the disapproval spread across Diamond’s face. Diamond, who is a biological male identifying as female, quickly put Henderson in her place by informing her that “Shea” is not pronounced the way it is spelled, a fact that Henderson was mysteriously supposed to have known.

“Uh, it’s ‘Shia” Diamond,” the singer told her sternly. “Put that on the record. Yes, honey, it’s violence to misgender or to alter a name of a trans person, so let’s always get that right first.” Diamond, of course, did not explain how accidentally mispronouncing a name was “altering” it, or how this obvious mistake was somehow “violence,” but nobody contradicted him — because the LGBTQ crowd is now in the driver’s seat, and the Democratic presidential candidates and CNN hosts are simply there to hold the microphone and agree as emphatically as they possibly can to everything they are told. Castro, for his part, hastily affirmed that his administration would have transgender advisers.

This bizarre exchange is actually microcosmic in some ways, as it highlights a shift on the progressive Left to condemning speech they dislike as “violence” in order to effectively silence their opponents. Those who disagree with the LGBTQ crowd are often told that their very opinions, if verbalized, constitute a form of “violence” or “assault,” and often rowdy protestors use this nonsensical accusation as a justification for real violence in which real people are battered and bloodied. This shift is very important to take note of, because conflating contrary opinions to actual assault is precisely how the Left will attempt to legally restrict what their opponents can and cannot say.

But one of the most ironic things about Shea Diamond leveling this particular accusation is that the singer, as a young man, actually robbed a convenience store at gunpoint and spent roughly a decade behind bars for doing so. In glowing profiles of his work (each of them obediently referring to Diamond as a “she”), this genuine, real-world crime, in which a real gun was pointed at a real person who was genuinely afraid that they might be shot to death, is justified or glossed over as an act of desperation by a transgender individual on a journey to find himself — he held up the store, Diamond says, in order to get cash to fund a sex change. Well, that’s alright then.